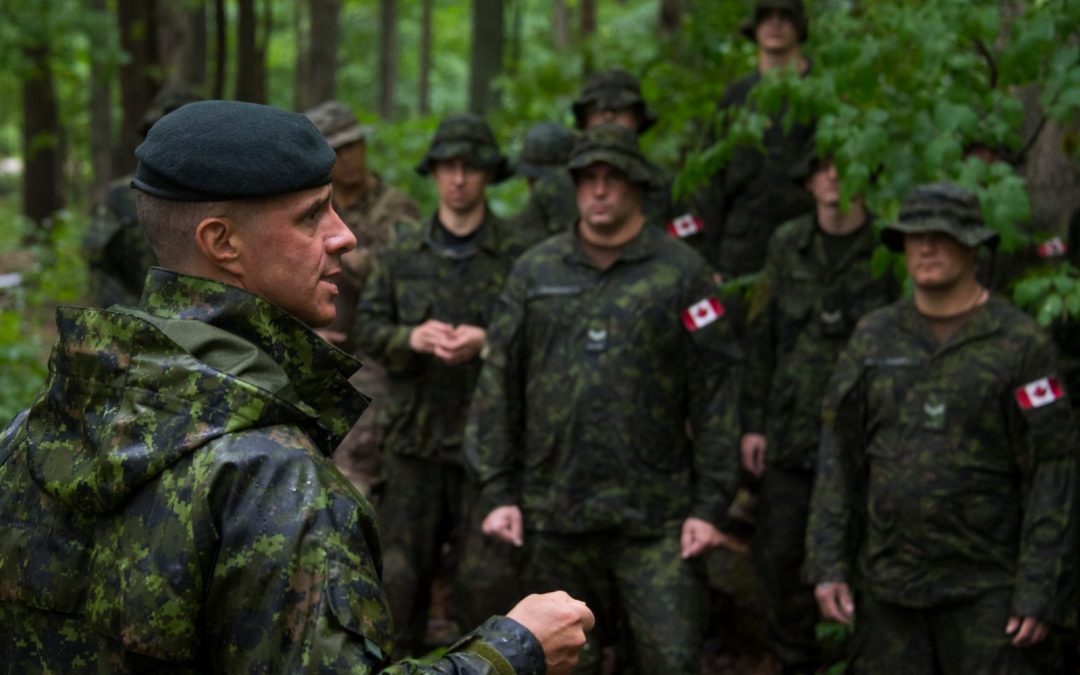 You can take a general out of Chief of Programme (CPROG), but you can’t take Chief of Programme out of the general. It’s not an old Canadian Armed Forces (CAF) saying, but you wonder if it should be after spending some time with Lieutenant-General Jean-Marc Lanthier.

Lanthier assumed command of the Canadian Army on July 16, but 80 days later, when he sat down for an interview with Canadian Army Today, he was still thinking in part with CPROG’s mindset of CAF corporate strategy, resource allocation and performance management.

Most of his career has been spent immersed in the business of the Army, commanding the 12th Armoured Regiment, the 5th Canadian Mechanized Brigade Group, the 2nd Canadian Division, and the Canadian Army Doctrine and Training Centre. But his time as Director of Land Requirements and, most recently, as CPROG, has given him “programmatic, performance measurement, and institutional experience,” he said, that are shaping his agenda.

“I describe my agenda as two key themes. One is the sustain agenda, which is delivering on the plan that Lieutenant-General [Paul] Wynnyk set, just keeping that rudder straight on his objectives. As an institution, you cannot afford to keep doing course corrections,” he explained. “The other one is an alignment agenda, based on my experience at CPROG, that says we have to be better at performance measurement and anchoring ourselves in a results-based culture.”

That’s not new to an organization that, like all government departments, has been challenged to show greater return on investment through evidence-based decision-making. But Lanthier, a graduate of the Harvard Kennedy School and the U.S. Naval Post-Graduate School, wants a more refined use of metrics to ensure he can demonstrate allocated resources are achieving the expected results. It’s more than merely an efficiency exercise. 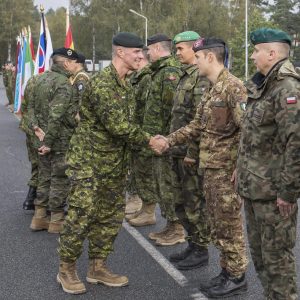 “It is really about effectiveness. How do you reinforce success and eliminate those capabilities that are not contributing to your key objectives?” he said. “The business of the Army is to prepare for and win the nation’s fights, so it is all about readiness: Making sure your people are ready, your equipment is ready, and all the enabling functions and infrastructure, training, people management, those things are geared to optimization of your performance at all levels.

“Getting all of this right is the core of my mandate. Everything I look at is through the lens of, does that give me the best level of readiness I can have?”

Lanthier acknowledged that for organizations already swimming in data, the challenge isn’t so much about finding more metrics to track, but rather identifying which key performance indicators at each level of the Army will yield the information he needs. He doesn’t need to know exactly what every division, brigade or company commander is tracking, he said, but “each commander has to track a little more.”

“We’ve got to get better at using the systems we have, better at quality control of the data that gets in, and then we have to understand what is the right business question. Are you asking the right questions to understand what you are trying to do? There’s a lot of work to be done. That’s why even though it is a management thing, it is so high on the agenda. If we don’t do it, we won’t deliver the best level of readiness we can.”

To ensure that message is being received throughout the Army, Lanthier intends to “increase the velocity of information” by flattening communications through a number of initiatives, including having brigade-level commanders dial into a monthly commander’s update brief, a forum normally reserved for senior headquarters staff and division commanders.

“If you don’t understand where I’m trying to go with the senior leadership, then we are not rowing together,” he explained. “They will listen to what I’m measuring, the questions I ask, the direction I give, so they understand what we are trying to do. It doesn’t mean the division commanders won’t [also] tell their subordinates about it, but it accelerates that velocity of information.”

While performance measurement and its impact on readiness might require changes in approach, Lanthier said he’s encouraged by the 2017 defence policy that provides clarity on the types and scope of operations the Army must be able to deliver, as well as the commitment of more resources to infrastructure, equipment, in-service support, personnel and growth.

“In my almost 30 years of service, I’ve never seen an environment in which there are so many well-resourced opportunities,” he said, adding there is also a willingness among senior leadership across the CAF and the Department of National Defence to challenge the status quo. “There is an enormous opportunity on multiple fronts to do things right: Take better care of our people, acquire equipment quicker, make sure that we understand how the environment has changed.”

Challenging policies will be a necessity, he added, because the CAF is not built for growth. From the Forces Reduction Program through Strategic Review, the Deficit Reduction Action Plan and a litany of other initiatives over the past two decades, the mechanisms of governance and cumbersome policies are not suited to attract and retain a workforce with vastly different expectations about career and work-life balance than this generation.

“Now that we’re trying to grow, the governance is too heavy, the risk management is too heavy. A lot of things aren’t there. There are policies that date 15 years that have never been reviewed. We have not adapted for the environment of growth we are in.” 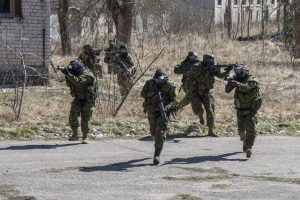 Canadian soldiers in Latvia cover their arcs using simunition weapons while moving rapidly toward the next building during Ex. Claymore Knocking in Skrunda in April. Photo: Cpl Jean-Roch Chabot

He’s reminded of the competition the Army faces every time he returns to cities and towns in Quebec and sees “We’re hiring” signs hanging in the windows of many businesses. “There is opportunity here to completely review how we recruit, how we train new personnel, and what interests them enough to retain them,” he said.

The Army is in the process of evolving its capstone operating concept from Adaptive Dispersed Operations to Close Engagement, a subtle change that places a greater emphasis on engagement across the entire spectrum of operations rather than primarily close combat. But agility and network connectivity remain central tenants of the capability the Army is striving to build.

To do that, however, Lanthier faces a paradox: Many of the skills he needs to attract and retain, from intelligence to cyber, are meant for the very positions the CAF is finding the hardest to fill.

“Cyber is critical. If you are not able to acquire cyber assurance or dislocate your enemy in the cyber sphere, you become irrelevant in the battlespace,” he observed. “Same thing with the space piece: Everything we do is space-enabled, from communications to munition delivery and ISTAR (intelligence, surveillance, target acquisition, reconnaissance). We don’t have enough intelligence [personnel] to process all of that information. We probably don’t have enough people for all of that connectivity, all those C4 (command, control, communications, computers) systems. We need to reinvest and restructure the force.”

That will undoubtedly mean a change in who is eligible to serve – injured soldiers with computer skills, for example, would remain an invaluable resource – but Lanthier is also looking more broadly at the larger Canadian population. Close Engagement places a premium on what the Army calls JIMP (joint, interagency, multinational, public) skills and, as Russian action against Eastern Europe has demonstrated, non-kinetic information activities and psychological operations are in high demand.

“We need to be more agile to tap into the entire diversity spectrum that Canada has to offer. The Army desperately needs more diversity,” he said. “Having served six tours, three directly in support of training and capacity building indigenous forces, to have somebody who understands the culture, speaks the language, and can establish trust is enormous.”

That includes more women on operations, he added, noting the number of allies developing female engagement teams to help train indigenous women soldiers. “Being able to communicate with women and respect their cultural and societal norms is critical to achieving the outcomes we are seeking.”

The CAF has launched a Force Mix and Structure Design Review, but Lanthier said the Army will have to rebalance its force structure to better meet the requirements of Close Engagement. That will include new investments in electronic warfare capabilities to have the “robustness” to operate in a degraded electromagnetic spectrum, and in capabilities such as ground-based air defence that were allowed to atrophy because of capacity challenges.

“The Olympics in 2010 demonstrated there are things you do want to own. Importing somebody else’s capability or asking for support to protect yourself in your own country, that is probably not the best option,” he said. 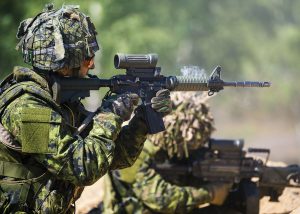 Among his top procurement projects is logistic vehicle modernization (LVM), a program he initiated 10 years ago as Director of Land Requirements. Delivery of the Medium Support Vehicle System (MSVS) MilCOTS and Standard Military Pattern trucks go a long way to provide the Army with a domestic and expeditionary logistics capability, but LVM is a Forces-wide light and heavy trucking capacity that is desperately needed.

“We are working heavily with the Chief Financial Officer and Assistant Deputy Minister (Materiel) to make sure we have a programmatic approach that allows us to deliver what we can within the envelope of funds that we have,” he said. “That one is critical.”

He’s also focused on the LAV 6.0 conversion and the LAV Reconnaissance Surveillance System (LRSS) upgrade, the medium force capacity of the Army, and the Leopard 2A4 tank fleet, which he said is experiencing severe challenges.

“We have to get these right because these capabilities are what enable us to do the high-end warfighting. Our centre of gravity remains the combat team. I need that whole spectrum because that is what makes us relevant and credible on the battlefield.”

As part of his performance metrics, Lanthier is also looking closely at the use of more live, virtual and constructive simulation across the entire training system, especially projects like the Weapon Effects Simulation (WES) upgrade, that could save time and resources.

As he settles into the job, Lanthier is reinforcing with subordinates the two key values he takes to heart, respect and trust. Both matter deeply if the Army is to recruit and retain a diverse and gender-balanced workforce, and work with other services, departments and agencies in the procurement process.

“Respect is at the heart of everything we do; it is the first principle of our code of ethics,” he said. “That then leads to teamwork, which is a principle of our ethos. Teamwork leads to the warfighting spirit, and that’s only what allows you to accept that tenant of unlimited liability.

“And if you don’t have trust up and down and lateral, inside the Army and toward the institutions in town, then you are irrelevant. I will work tirelessly to demonstrate we are honest, that we have integrity, that we do things right, that we work towards the greater good of the CAF.”