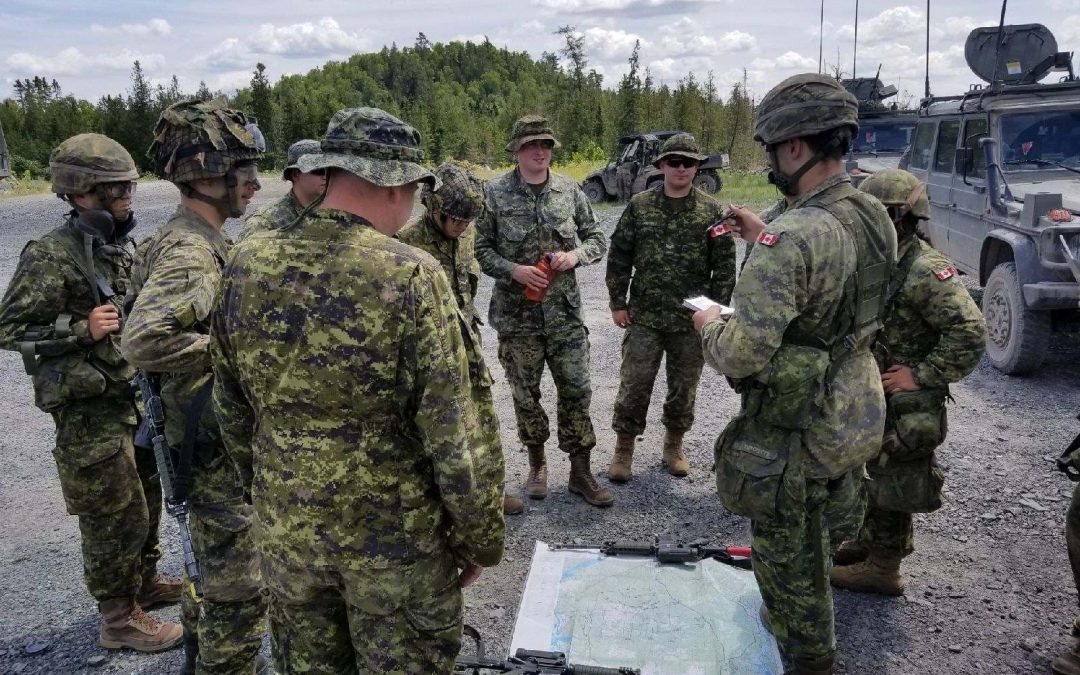 Second-Lieutenant Richard McCurrach cradles a scabbarded cavalry sabre on his knees. Between it and his waxed mustache, he wouldn’t look out of place in a Victorian cavalry regiment – all he needs is a scarlet tunic or a hussar’s braided jacket. Instead he is dressed in modern-day CADPAT.

McCurrach was awarded the sword as the top candidate in the Reserve Armoured Reconnaissance Troop Leader Course that wound up the day before. (Alas, he doesn’t get to keep it. It’ll go back on display, but with a little plate giving the year he won, joining the long list of previous winners.) Today, he and his fellow students are being treated to a barbecue on the patio behind the officers’ mess at CFB Gagetown, N.B., by their instructors. The students, 11 in all, are drawn from Reserve armoured regiments across Canada.

They are part of an annual migration that fetches up in Gagetown every spring. Unlike, say, the return each year of the swallows to Capistrano in California, no one has ever written a song about it, and naturalists don’t study it. But in terms of the Army’s “ecology,” if one can use that term, it’s undeniably important. In some ways that are obvious, and in others that are a subtle.

FOR THE RESERVISTS, the obvious gain from sustained time at Gagetown is the chance to be immersed in soldiering more or less fulltime.

McCurrach, a member of the South Alberta Light Horse in Edmonton, has been here since late April, doing first a familiarization course on the new TAPV, then a crew commander course on the G-Wagon, and finally, for the past few weeks, the armoured recon troop leader course. It’s a long haul compared to the Reservist’s usual diet of one night a week, a weekend a month, and two weeks every summer.

“I think that’s preferable,” he says. “Once you’re immersed in it, you switch out of your city or part-time soldier mode, and you can live it – you start to take it really seriously. You really feel you belong.”

For 2nd Lieutenant Brendan Caines, a member of the 8th Canadian Hussars in Moncton and a school teacher in civilian life, to be able to work with the Regular Force instructors was “a privilege.”

“You have these individuals with years of experience. One of our instructors has taught here for 10 years. He’s a walking encyclopedia on anything armoured reconnaissance,” says Caines.

“You learn a lot, and that’s how little you know,” says his fellow officer from the 8th Canadian Hussars, Phoebe Portilla-Villanon. “When the warrant tells you, it all makes sense.” 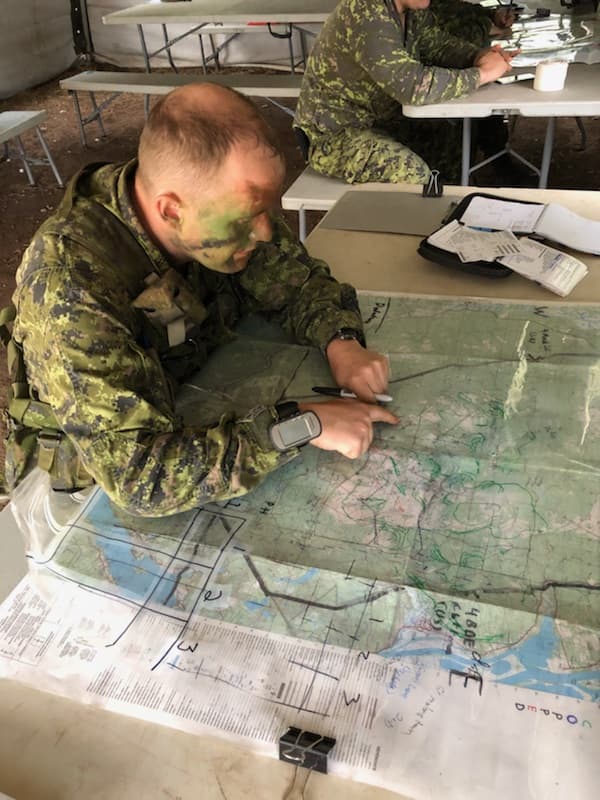 NOT TO OVERWORK the nature metaphors, but training Reservists can also be a little like planting seeds. Master Warrant Officer Sheldon Herritt, a squadron sergeant major from the Canadian School of Military Engineering, leads me into the woods adjacent to one of the training areas at Gagetown. We aren’t very far in when we come across 18-05, one of the six groups of engineering Reservists passing through Gagetown this summer on the basic course, DP-1, for Reserve military engineers.

It’s easy to imagine they are among the trees to learn the art of stealthy concealment, but the reality is a little more mundane. It has been a really hot summer in New Brunswick and sitting in these cool, shady woods is easier on everyone than out in the withering heat.

Five white tables have been set up, each containing a non-explosive version of the five main charges that combat engineers must learn to use for breaching – doors, walls and so on. Four or five troops stand around every table and listen as a sergeant or master corporal runs through how to put these charges together and the correct way to use them. Next week, as their course draws to a close, they’ll get to try out the real thing. Not surprisingly, they are paying close attention.

Each of the courses typically has up to 43 participants, and while half of 18-05 is working with the instructors, the rest are waiting seated in the woods, cleaning their weapons.

Most of these young sappers are college and university age and, like the officers on the armoured troop leader course, they come from across Canada – looking at the slip-ons on the front of their CADPAT, one can see field engineer regiments located in Nova Scotia, Ontario and Alberta.

“The training they receive is similar with the Regulars,” says Herritt. “There are parts they don’t get, but the parts they do get are identical.”

The course is made up of modules and it takes a Reservist more than a summer to get through them all. Speaking with another group of young field engineers, Herritt reminds them to work on their fitness when they are back with their units, so that next year, should they return, they will be ready to take on the challenges of further training.

Ultimately, their units gain trained engineers, and the Army gains Reservists it can integrate more or less seamlessly into Regular units should they be needed – as it did in Afghanistan. But it’s not hard to realize that there’s another benefit to this training – living and dining in tents, working long hours on their physical training, and working at their chosen craft each day. It’s an intensive exposure to the Army way of life. When I ask them how many are considering a career in the Regular Force, more than half put their hands up. 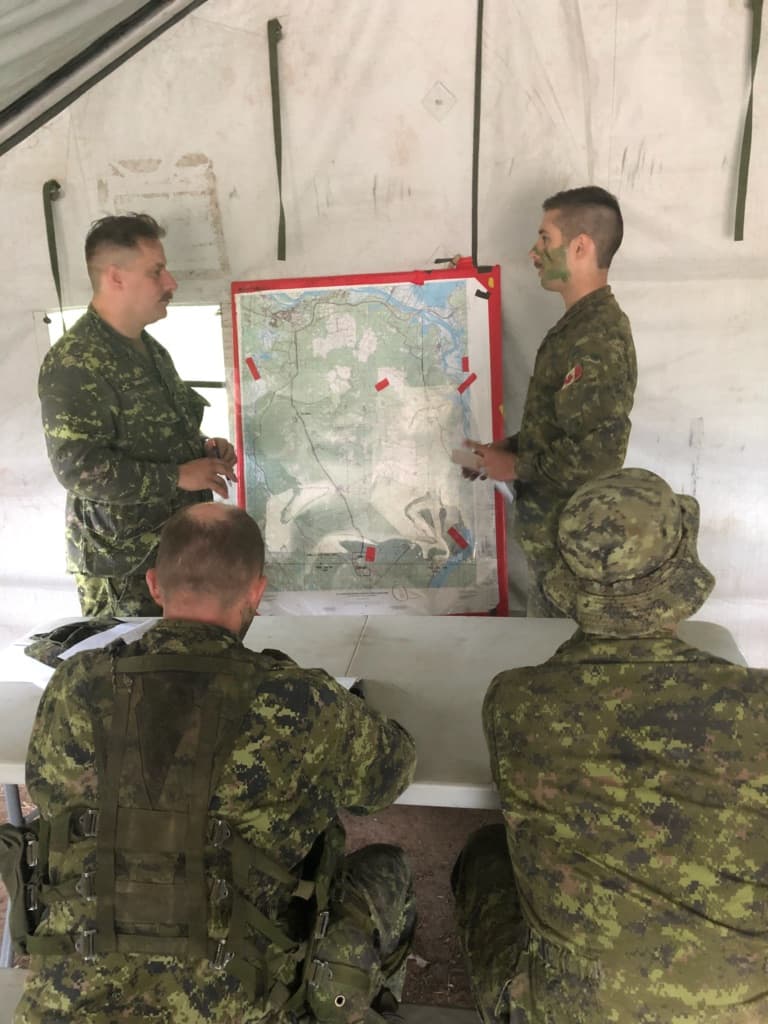 Master Corporal Derek Schiell nods to the sapper kneeling beside him. He in turn has a cord in his hands that runs inside a wooden house. It is one of a collection of buildings in another training area at Gagetown known as the Austere Village, which can serve as pretty much any built-up area anywhere. Inside, the cord runs through a dangling carabiner, snakes up the stairs and makes a sharp turn, ultimately ending up connected to a piece of furniture that might be booby-trapped.

The kneeling soldier bellows, “Pull, pull, pull” and tugs on the cord. If this was the real thing, this would tell anyone nearby to expect an explosion.

Inside the house, Schiell shows me the “booby trap.” It features a clothes pin detonator that when disturbed would close and complete a circuit. It seems devilishly simple, but says Schiell, “most booby traps are very simple.”

Schiell, like Herritt, is a Reservist serving on a full-time contract. From Trail, B.C., he has been teaching this course for the past four years, usually to Reservists. The current groups he is working with, however, are in fact half Reservists and half Regulars. The ways that the Regulars support the Reserves are fairly easy to enumerate, but what is interesting is what the Reserves bring to the Regulars.

Schiell’s work instructing Regulars is a tangible example, but there are other, subtler ways. There’s motivation. Reservists have to juggle the civilian and the military. As Master Corporal Schiell puts it, when it comes to instructing, he really wants to be there.

As well, the Reservists bring with them skills that they’ve picked up in civilian life. “We have a guy in our course who’s a career welder in civilian life,” says Oliver Douglas, from St. Thomas, Ont. “Just the other day he was on one of our bridges and he noticed an off weld. He said, ‘We need to fix that.’”

Perhaps as valuable, the Reservists can bring a different perspective. Says Caines: “The advantage of having Reservists work with the Reg Force is, we get to look at problems sometimes from the outside in. We get to look at a problem fresh because we’re not living it every day. Or depending on the nature of our [civilian] work, we might have a new perspective on things.”