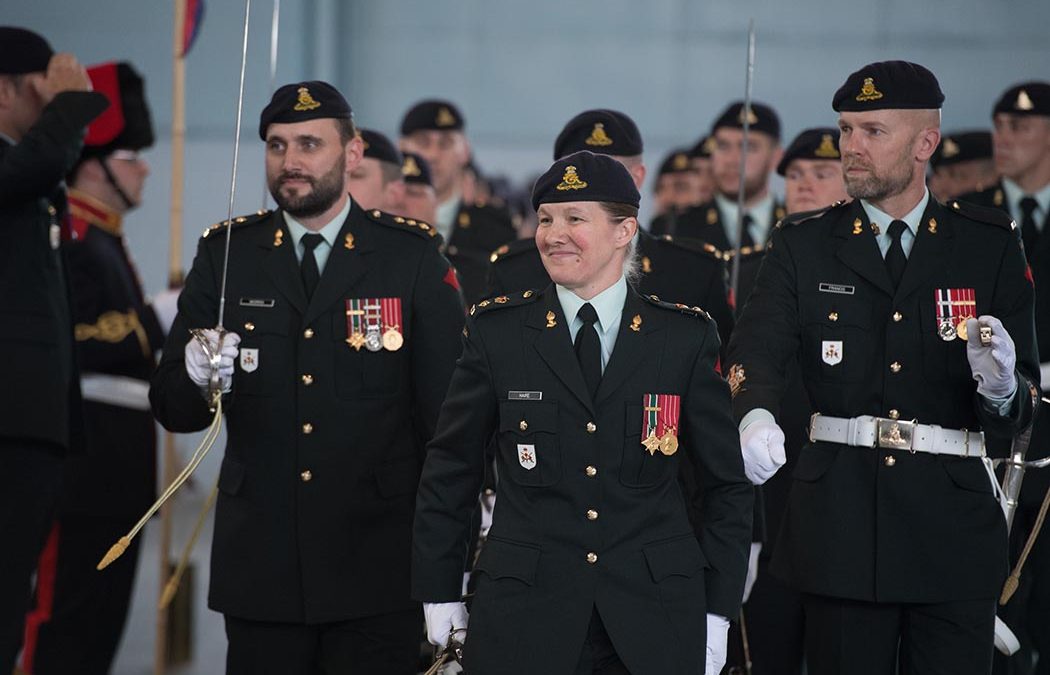 There is always great pride and celebration when there is a change of command parade at The Royal Regiment of Canadian Artillery School (RCAS), but on June 21, 2019 when the RCAS’s first woman commandant took command, a new page of history was turned.

Gunners from across Canada converged on 5th Canadian Division Support Base Gagetown to witness a change of command parade between the outgoing and incoming Commandant of The Royal Regiment of Canadian Artillery School.

Notable “Great Gunners” in attendance were the Colonel Commandant of The Royal Regiment of Canadian Artillery (RCA), Brigadier-General (Retired) James Selbie, along with the Director of Artillery, Colonel Marc Lafortune (himself a former Commandant of the RCAS).

With building H12 sheltering all in attendance from a classically wet Gagetown day, the change of command parade was on time and on target, with two Batteries of Gunners completing the ceremony with precision and discipline. The result of days of practice, one could feel the “Gunner Pride” in the air, as spectators had the pleasure of observing an important institutional milestone for the RCAS.

During a stirring speech, LCol Roby gave thanks to all members of the RCAS, the senior leadership of CTC and RCA, and concluded with heartfelt tribute to his family, which had supported him throughout his command.

Col Errington thanked LCol Roby for his commitment to training world-class Gunners, through his continual reinforcement of the tenets of Mission: Ready, the Department of National Defence/Canadian Armed Forces’ collection of available resources and support programs to help them achieve life-work balance, personal strength and resilience.

Moreover, he spoke to LCol Roby’s vision of a harmonized training schedule, which had led to the creation of Exercises COMMON GUNNER and AUTUMN GUNNER, which enhanced resilience, heightened training realism and enabled resource efficiencies.

The Colonel Commandant extended the gratitude of the RCA to LCol Roby, noting his outstanding performance as the Deputy Director of Artillery, and thanking him for providing the Field Force with soldiers and leaders ready to deploy on expeditionary operations.

As a tribute to LCol Roby’s commitment to both the RCAS and the RCA as a whole, Col Lafortune presented the outgoing Commandant with an Instructor-in-Gunnery (IG) hat, a universally recognized symbol of the mastery of the Technical and Tactical Artillery knowledge.

This is only the third time in the history of the RCA where the appointment of IG has been bestowed in an honorary capacity! Both Col Errington and the Colonel Commandant extended a hearty welcome to the Haire family, wishing them all the best in their return to New Brunswick.

In her introductory speech to the RCAS, LCol Haire promised to uphold the high standard set by her predecessors, and assured her Unit that their welfare was her foremost priority. In stirring praise to those on parade, all of the senior officers extended their gratitude and respect to all members of the RCAS for their outstanding drill, dress and deportment.

A highly experienced instructor, LCol Haire is very excited to return to the RCAS, proudly wearing her IG hat once again. “It is wonderful to see how things have changed since my last posting to Base Gagetown in 2008,” said LCol Haire.

She continued, “It truly is an institution that continues to evolve, maintaining its relevancy, and ensuring that the Canadian Army has the best trained Gunners in the world. My family and I are extremely happy to be back in New Brunswick, and I look forward to maintaining the outstanding legacy of LCol Roby’s tenure as the Commandant. To the women and men of the RCAS, I am looking forward to working with you all, as we continue to provide and train ready and resilient Gunners for the RCA.”

Currently, Gunners at the RCAS are working in “full rate,” getting ready for this year’s iteration of Exercise COMMON GUNNER, which see all of the Artillery functions conduct Individual Training within a Regimental construct.