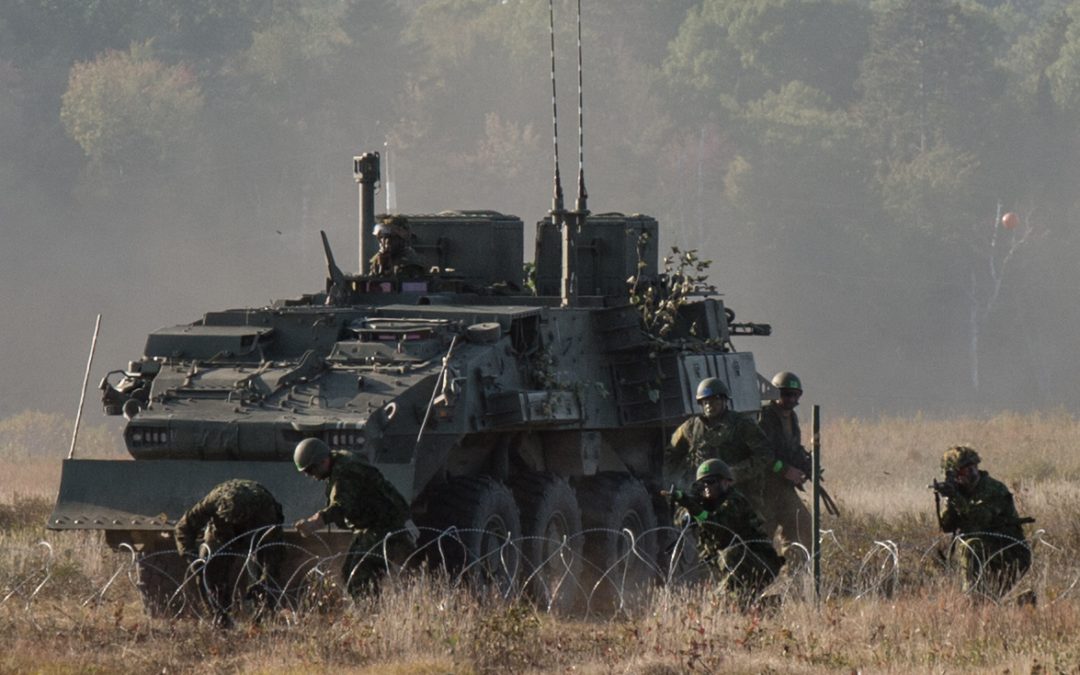 There may still be a grain of truth in the observation that “an army marches on its stomach,” as variously attributed to Napoleon and Frederick the Great. But the Light Armoured Vehicle (LAV) from General Dynamics Land Systems-Canada (GDLSC) is a far better way for soldiers to get around.

Capable of bursts over 100 kilometres per hour and highly mobile despite a curb weight of some 14,300 kilograms and a combat weight of more than 19,000kg, the big 8×8 has been the Canadian Army’s key tactical platform in various configurations since its 1998-2006 procurement.

Of the 651 originally delivered, 313 were kitted out as infantry carriers and 181 as command posts while the rest were a mix of missile platforms, observation post vehicles and engineer variants. Those third-generation LAV IIIs flowed from a lighter LAV II platform developed in the 1980s, gaining weight mainly to improve crew protection.

Procured as a broad-spectrum replacement for an array of pensionable troop-haulers, the LAV IIIs originally had all-round protection against 7.62-millimetre fire, which was upgraded to 14.5mm protection with passive modular armour.

Even so, they took considerable abuse during Canada’s most recent combat deployment when more than 100 were used in Afghanistan. At one point, a third of that fleet was reported to have been out of service. In all, more than 350 sustained damage to varying degrees. More concerning, they proved vulnerable to improved explosive devices.

However, the LAV IIIs aren’t about to be put to pasture at the front gates of Canadian Armed Forces bases just yet. The LAV UP, also known as LAV 6.0, project is expected to push their operational life to 2035.

That effectively was set in motion in November 2008 when the Department of National Defence (DND) confirmed that it wanted to combine three programs into one general set of upgrades to all armoured vehicles. That led to a $1.064-billion contract award to GDLSC in October 2011 to modernize 550 LAV IIIs to enhance not only their survivability, but also their mobility and lethality.

Under the contract, 409 vehicles were to receive turret and chassis upgrades while 141 LAV Operational Requirement Integration Task (LORIT) variants were scheduled to receive only the turret upgrade. A contract amendment in February 2017 added $404 million to upgrade the LORIT chassis as well.

Now the focus within the Directorate of Land Requirements (DLR) is on the Light Armoured Vehicle Specialist Variant Enhancements (LAV SVE). Major Philippe Masse, the project director, brings operational chops from Afghanistan, although he’s quick to say that he’s had a lot to learn about the vehicles since he was assigned. He’s taken a clean-sheet approach, conducting extensive discussions with combat engineers, artillery officers, and gunners.

Masse’s career includes nine months as commander of a light infantry platoon tasked with force protection of the Kandahar Provincial Reconstruction Team and later as second-in-command of the Royal 22nd Regiment battlegroup’s parachute company for its final combat rotation on Operation Athena.

The LAV III infantry carrier and command post variants are the two largest elements of the fleet and are often tasked additional roles. However, the two specialist variants, the Engineer and the Observation Post Vehicle, used by Artillery’s forward detachments, will be “enhanced” under this project. 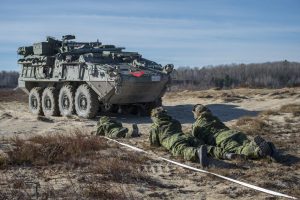 “When they went into the LAV UP project definition, they had to cut down certain upgrades to make it fit the financial envelope,” he said. “Also, some others perhaps were not as technologically ready.” So, three projects, while still technically discrete, were consolidated under the LAV SVE umbrella, which will provide more commonality on elements such as enhanced crew protection.

One upgrade has the Engineer variant in line for a remote weapons station (RWS) in addition to its customary suite of hydraulics and digging hardware. “Engineers need their tools,” Masse acknowledged. “But there are so many tools that the LAV Engineer does not have a turret, so the next best thing for self-defence is the RWS.”

Firepower may be what first comes to mind with an RWS, but the sights are also important for combat engineers, who conduct obstacle reconnaissance and other tasks that rely on good sights. The current RWS has “problems with obsolescence, spare parts, older technology sights,” he said. “It’s nothing exotic, it’s what they need for basic self-protection.”

DND will have to partner with GDLSC on RWS integration, but DLR is looking at “what will be the best fit.” Kongsberg Defence & Aerospace of Norway is one of the largest players – it supplies the RWS on the Tactical Armoured Patrol Vehicle – but Rafael Advanced Defense Systems of Israel is a prospect, too. While DND often strives for commonality across fleets, Masse noted the need to balance that with government policy for open competition. “But my first priority is to deliver the right equipment for the soldiers,” he said.

The second variant will be the Observation Post Vehicle (OPV), a key cog in any combat machinery because of how it can manage other assets such as the fury of the artillery gun line or the growing number of unmanned aerial systems. “You want the crew to be as effective as possible. So, in the LAV OPV, we will procure a targeting independent viewer (TIV) that will improve the crew’s local situational awareness, observation and target acquisition capabilities,” said Masse.

TIV technology has already been installed in the Leopard II main battle tanks as a hunter-killer sight, but the cost of putting it into every vehicle during LAV UP was “a bit of a bridge too far for the LAV fleet,” he noted. “However, we took a step back and decided we do need an independent viewer for the Joint Terminal Attack Controller crew because we want them to be able to get their own targets and fire on them, totally independently from the guy in the turret who could look for other targets and arrange for indirect fire or even use the main gun in the turret.” That’s the 25mm Orbital ATK M242 Bushmaster chain-driven automatic cannon – widely used by NATO members – firing 200 rounds per minute.

Project identification was completed in 2016 and a request for proposals is expected this year, with contract award in 2019 and all 47 vehicles retrofitted between 2022 and 2024. A preliminary cost estimate is up to $95 million.

Where the TIV would be fitted is still being studied. One option is a stubby turret mast. A retractable mast would broaden crew capability in theatre and, because the retraction hardware could be external, it would not compromise LAV interior space. 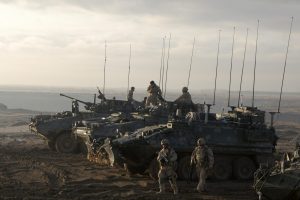 The third discrete project is a multi-element target observation and fire correction system. “This is basically the OPV crew’s tool to get a far target location with more precision and provide immediate fire correction as needed to air assets or artillery,” said Masse. “Precise vehicle position, secured from global positioning and inertial navigation systems, augmented by a laser range-finder, are key elements in targeting, especially when atmospherics come into play or a target moves. It brings down the level of error to be as precise as possible,” reducing the likelihood of collateral damage.

While the potential price was an early concern, greater crew efficiency should reduce costs in the long run. Since the crew commander can use the main turret gun for defence, “if we can get the people in the back to also get access to this tool, it will [make] the whole team a lot more efficient,” he said. “These vehicles are used a lot and every company that’s training right now in Canada wants to have a LAV OPV and the full JTAC crew to train with them.”

As with the TIV project, the target observation and fire correction proposal is in options analysis, but the project team expects to have Defence Capability Board approval by this spring to enter the definition phase.

There is extra pressure on the LAV SVE package because it was specifically identified in the Strong, Secure, Engaged policy document. “We’re on track; the options are getting a lot of priority,” Masse said. “We’re already engaged with General Dynamics Land Systems because they basically own the intellectual property of the fleet…. When you want to integrate new stuff, they’re among the first phone calls you have to make.”

While integration of a complex system is always a challenge, one of the team’s considerations will also be ease of maintenance, especially for soldiers in the field. “We’re looking to align that, if possible, with existing in-service support contracts that we already [have],” he said. “The bottom line for us is reliability.”