From the road to the simulator: Combat vehicle training in a virtual environment 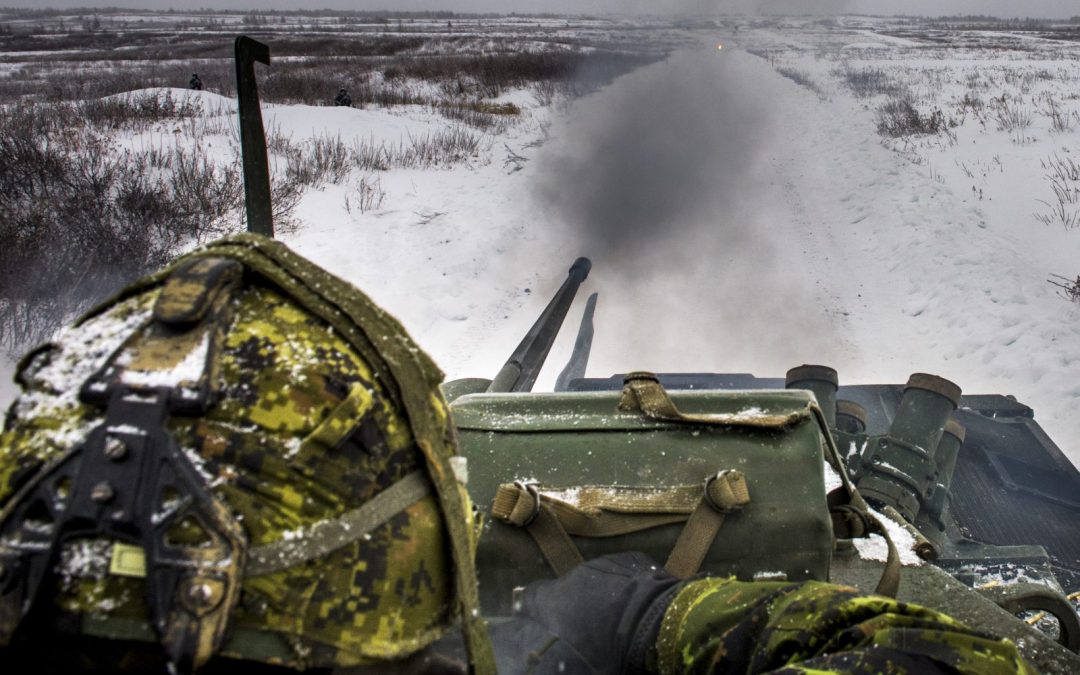 Throughout history, armies have tried to simulate combat in training programs as realistically as possible, to bring soldiers to peak readiness for battle. Today, the Canadian Army is working on a project that will introduce a transformational virtual training system that will allow the crews of its principal combat vehicles to train at their home garrison. The Land Vehicle Crew Training System (LVCTS) project will leap a generation beyond today’s simulation experience.

When fully constructed at five bases across the country—Edmonton, Shilo, Petawawa, Valcartier and Gagetown—the simulators connected by a network will provide crew members of the Light Armoured Vehicle 6.0, Leopard 2 Main Battle Tank and Tactical Armoured Patrol Vehicle with virtual simulation training from the individual level right up to the full combat team.

Captain Michel Beauchemin, of the Directorate of Land Requirements, says the LVCTS will enable a higher level of training effectiveness and efficiency in support of the operational tasks the Army needs to conduct. “Sometimes we focus too much on cash savings from simulations versus live training. It may or may not be the case sometimes, but the real bottom line we should understand and promote is the fact that it enables a higher level of preparedness before going on field training exercises.”

The simulation experience allows soldiers to do much more in virtual space than in real life. “We can blow up as many vehicles as we want,” he noted.

As simulation enables challenging and complex tactical scenarios, soldiers are better prepared for battle tasks after simulation training, with decreased reaction times and better focus. Beauchemin agrees that simulation does represent long-term cost savings by enhancing field training and the overhead of fuel, ammunition, logistics, food, and wear and tear on the machines, but said the “two training streams actually complement each other. People used to see simulation training as a threat to conducting live training, whereas it is very much a complement.”

Since simulation training for combat vehicles is a relatively new capability, the Army reached out to allied nations to understand how Canada can avoid separately buying the same piece of technology several times over. “We also want to be interoperable, not only within the Canadian Armed Forces (CAF), but also with allied nations. One of the intended visions with LVCTS is that it gives us the opportunity to put other technologies alongside the vehicle training,” he said.

As an example, a small arms training capability could fit alongside the LVCTS in a training facility. “That would make the centres complete enablers for training, not just within the vehicle but for dismounted forces as well. The scope could eventually capture all the elements that would occupy a future battlespace.”

In fact, because the LVCTS is the Army’s first large-scale virtual simulation training system, with networked capability, simulation facilities and contractor support, it has the potential to become the backbone that links many other training systems. “It is naturally converging towards enabling joint training eventually. In the Army, we are tackling the challenge from our perspective, so it is naturally centred on the five main Canadian Army garrisons,” said Beauchemin.

As the LVCTS is currently planned, the progressive training will be enabled with a mix of simulators, from multipurpose computer-based systems with screens and controllers, to reconfigurable systems with the same controls as in the vehicle represented on touch screens.

“Finally, you have the high-fidelity, potentially full-motion simulator, very much like an aircraft simulator,” Beauchemin explained. “They don’t necessarily have to move on a platform, but they may have that capability depending on the cost-benefit of the requirement.”

Having three levels of fidelity in different quantities will enable the Army to give the right training at the right time for varying vehicle fleets. 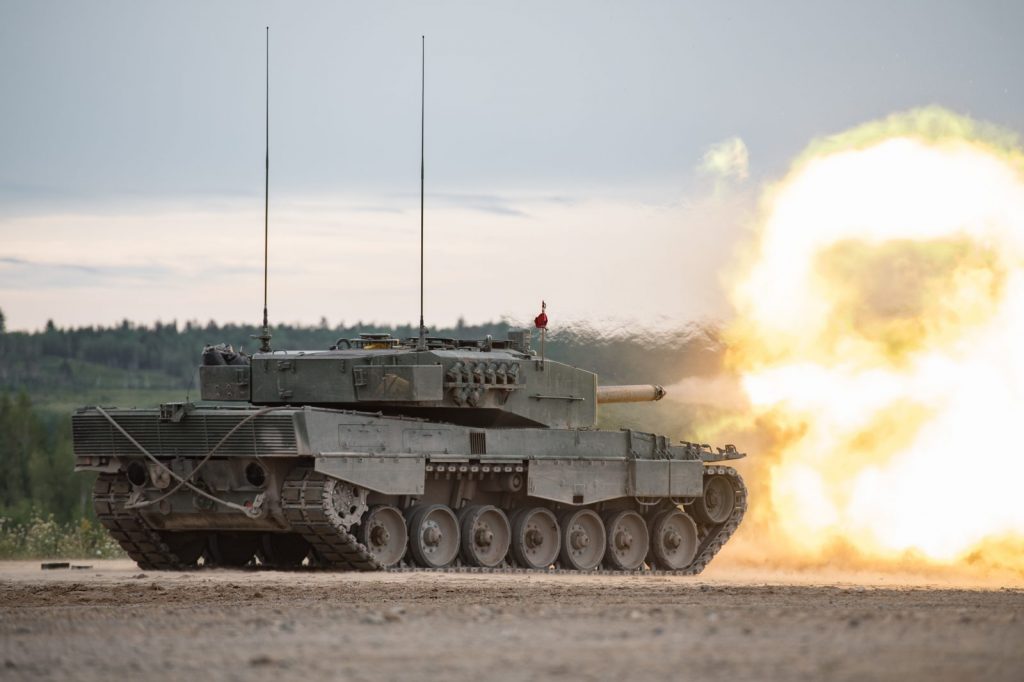 Members from C Squadron of the Royal Canadian Dragoons conduct a firing exercise inside a Leopard 2A4 tank, in the training area of 5th Canadian Division Support Base Gagetown. Photo: Cpl Genevieve Lapointe

The LVCTS is being developed against a moving background of planning within the CAF. “We have a simulation strategy that is being reviewed right now, and the latest changes are not released yet,” said Beauchemin. “Within the CAF we have what is called the Canadian Army Simulation Strategy. Over the last five years or more, the Canadian Army Doctrine and Training Centre has been refining this document to centralize the efforts within the Canadian Force.”

LVCTS entered the definition phase last year and is now led by a team with Assistant Deputy Minister, Materiel, the main procurement authority for the Department of National Defence. In effect, the project’s statement of requirements (SOR) has been approved, so ADM Mat can actively engage with companies that have the skills and technology to meet the SOR.

“We will be conducting an Invitation to Qualify process in the coming months, which gives us the opportunity to engage with industry and begin to down-select bidders,” he said. “DND can [then] deal with just those bidders that really can do the work. Most of the [companies] involved are very open to that idea.”

Beauchemin thinks military requirements could push the capabilities of the various simulation companies, as they move well beyond the single task-purposed simulators that train one person for one role on single stand-alone machines. “The different manufacturers and vendors are being directed to create components of a much wider synthetic environment. The idea is to have a core network to which other capabilities can be attached as needed or as they become available,” he said.

Chris Stellwag, a director at Canadian simulation company CAE, said defence customers are looking for more integrated training solutions that balance live, virtual and academic training. “It is important to look at a program like the Land Vehicle Crew Training System…more holistically than simply a collection of vehicle simulators and training devices. The LVCTS solution needs to address individual skills development, collective team training, and overall force generation in a program that requires collaboration and flexibility over the long-term.”

Lockheed Martin has been heavily involved with U.S. Army training, including the multiple integrated laser engagement system, or MILES, and doesn’t see the scale of LVCTS as a major challenge, said Amy Gowder, vice president and general manager of Training and Logistics Solution. “We do a good portion of U.S. Army collective training today…[and] we’re closely tied to the synthetic training environment [they] are modernizing. So, we [would] bring some relevant new technology.”

“The Army is a training institution,” Beauchemin emphasized, and the main business outcome is to generate troops for force employers such as Canadian Joint Operations Command. “So it’s all about training and readiness.” LVCTS supports that objective with an adaptable, scalable training solution.

At this stage of the project, Beauchemin is confident that senior Army leaders have the information they need to make decisions about these technologies. “Of course,” he said, “if the decisions are favourable to our recommendations, that means we need to deliver on our promise. And we’re looking forward to the chance to do that.”