Final Drive: A test of endurance on the Army Operations Course 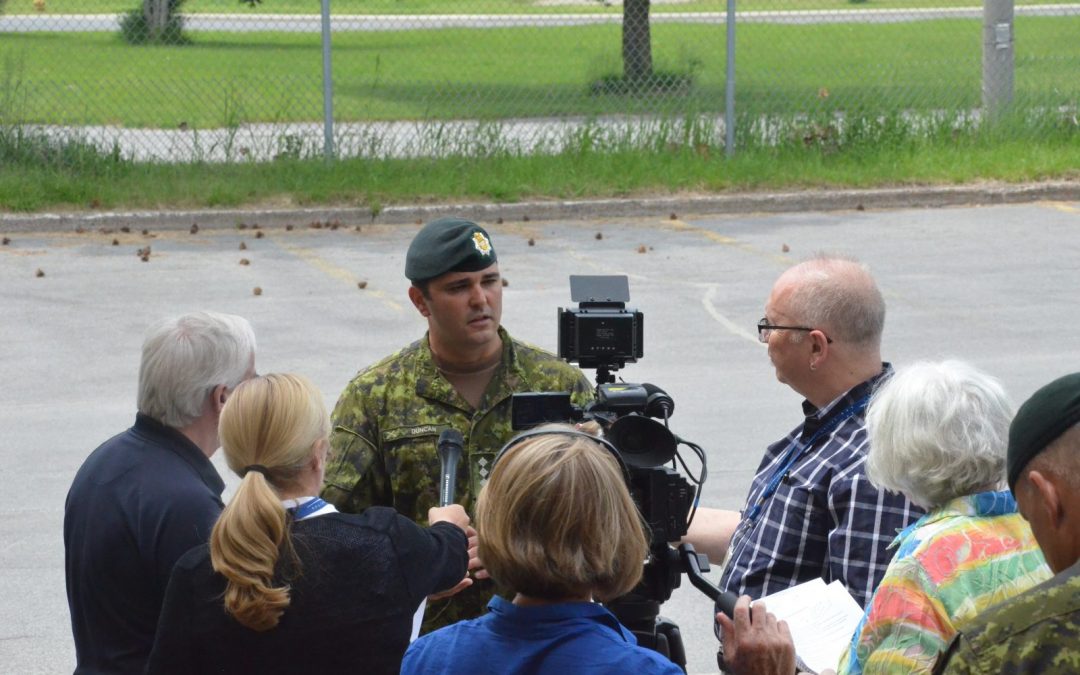 Lieutenant-Colonel Eric Groulx is referring to the work that led up to the chaos surrounding him. Dozens of junior officers intently tap away at computer terminals or confer with more senior officers. Paper signs stuck to the walls or on cubicle dividers announce “G-3, G-4” and so on. A constant distracting buzz of overheard conversations makes him hard to hear.

The location is the Canadian Army Simulation Centre at Canadian Forces Base Kingston, a facility managed in partnership with Calian Training. The surrounding uproar is the last piece of Exercise Final Drive for the Primary Reserve Army Operations Course, a three-day event that’s been almost a year in the making.

It’s a warm day in late July—not that you’d know it inside what feels like a windowless high school cafeteria. The candidates haven’t had much chance to experience the weather anyway; they’ve been grinding through 18-hour days for close to two weeks, 12 hours a day of instruction more or less, 6 hours on their own apart from that, to get ready for the elaborate simulation they will be enmeshed in over the next two days, overseeing the operations for two brigades for which they serve as staff thrown into conflict in the far-away land of Ventura. 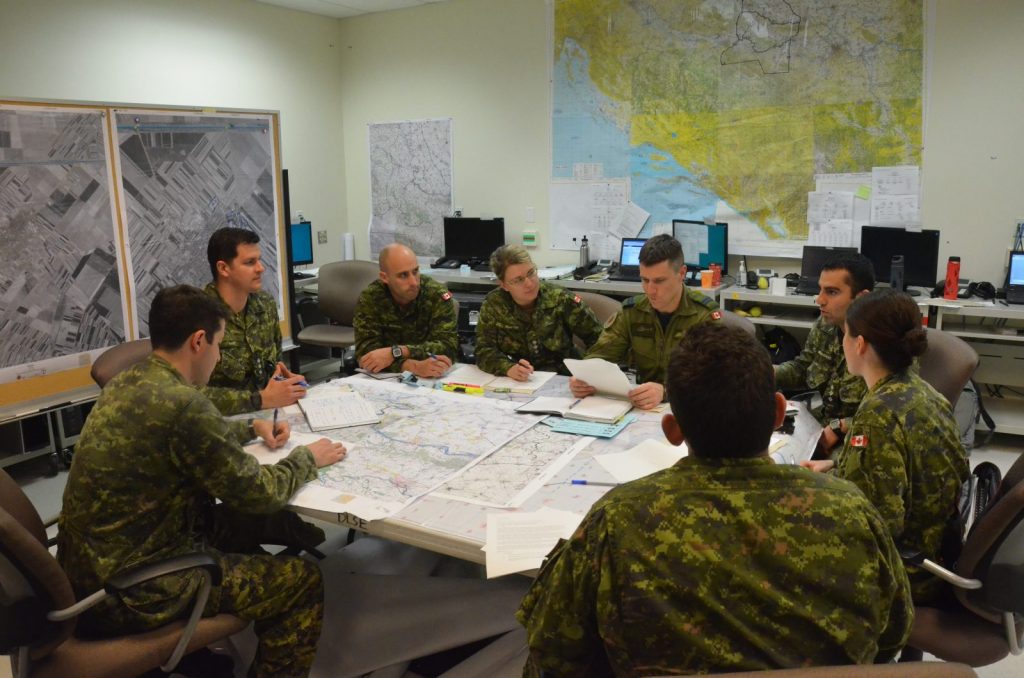 As many readers of this magazine will know, the Canadian Army Command and Staff College’s Army Operations Course is a key building block in the career of any officer, a bit of military alchemy that transforms captains into potential senior officers. The College offers three such courses each year, two aimed at members of the Regular Force and this third one intended primarily for Reservists (along with 15 Regulars and 21 foreign officers representing 11 different nations.)  This year some Canadian students and a few overseas students conducted the entire course primarily through distance learning.

The difference between the Regular and the Reserve courses is not content, but time. A Reserve captain keen on taking the next big step in their career must tuck it in and around their other obligations. One of the participants on this year’s courses, Captain Ed Gorham of Toronto’s 48th Highlanders, likened it to an executive MBA—you work a lot on your own and then come together with your fellow classmates occasionally for intensive sessions.

That’s an apt comparison, but it overlooks one big difference. The average student in an executive MBA is trying to juggle work, school and home life. The students on this course are balancing all those and more. In addition to a day job and the demands of a family, they have a commitment to their Reserve unit. In fact, students are encouraged to reduce responsibilities in their home units as the Army expects them to dedicate a significant amount of time to the course—up to two evenings a week and one weekend a month.

The students here began work almost a year ago when they received the first reading materials for the course the previous August.

“The course is broken into three tutorials,” says Groulx, the College’s Dean of Reserve Individual Training and Education. A Reservist himself, he is the former commander of 49th Field Regiment RCA in Sault Ste Marie and a graduate of the course. “The first is doctrinal foundations, and it is done primarily through distance learning.”

Up until now, these officers have focused on their own specialization; this section of the course aims to help them “learn the Army,” as Groulx puts it. Tutorial One runs from September to January. In January, they then begin putting what they’ve learned into use, planning operations for a battle group—an infantry battalion augmented with an armoured squadron, engineers and other supporting units.

Tutorial 2 features online work, plenty of it, but, says Groulx, “it is more focused on what they are doing on weekends.” Although they work individually much of the time, the students are grouped into syndicates of roughly 10 each, working under the guidance of experienced Reserve officers. “All of our instructing staff are post-command lieutenant colonels with a wealth of experience,” he says. Numbering about 20 in all, they have “about 600 years of service in total.”

A quick glance at the rank slides the students wear on their uniforms tells you that they are from units scattered across the country. The students are grouped regionally—there are two syndicates out west, three in Ontario, two in Quebec, and as Groulx puts it “one to one and a half in the Atlantic provinces.” Bringing them together for weekends presents challenges. For example, once a month in the Atlantic provinces, students have to get themselves to one central location, usually Halifax, whether they are from a unit Bathurst, N.B., or St. John’s, Nfld.

Once they’re gathered, though, they have to hit the ground running. “Training starts as early as we can,” says Lieutenant-Colonel Jonathon Penney, who mentors the Atlantic group, because most have to be back at work by Monday morning.

The course load, the travel—it can all add up. “We lose about 10 students per serial,” says Groulx. “It’s hard on the staff, too.”

The third tutorial brings the remaining students to Kingston. For most of their time here, they work learning how to plan and run a brigade-sized operation, to give them “some experience in all aspects of managing a brigade,” says Groulx. 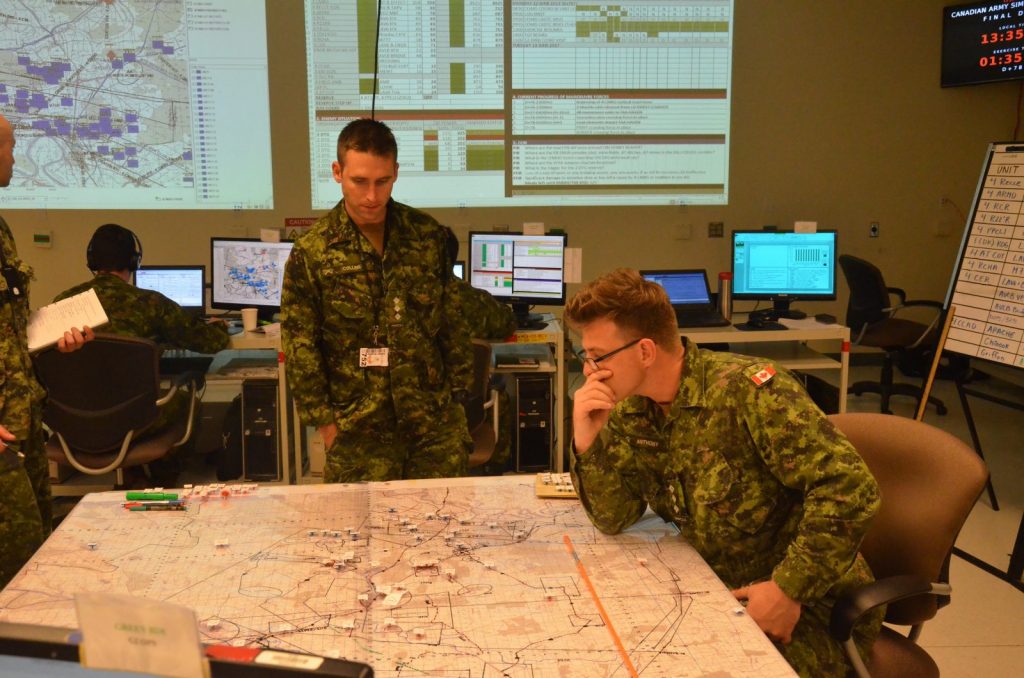 Their ultimate job here is to make up the staffs for two brigades that are in turn part of a division. The challenge? Far-away Ventura has been racked by war. A peace treaty is about to be signed, but before it can be, fighting has broken out again. The job of the division, and by extension these two brigades, is to push back the insurgents. They’ll be doing this in real time, spread over two days in simulation.

Their “enemy” is located in a separate room in the same building, comprised of retired Army officers dressed in golf shirts and tan slacks, working in what looks like a high school computer science lab. This enemy force is under the control of Lieutenant-Colonel Mike Popov, a retired armoured officer with 27 years’ experience. Like the Reservist mentors, many of them have commanded armoured or artillery regiments or infantry battalions. Other contract officers play the role of the division’s other brigade and divisional staff.

The divisional commander is played by Colonel Dyrald Cross, at the time the commandant of the college. While it is running, he can be found seated before a large cloth map spread out on the floor of a drill hall, where he can watch young soldiers push around markers that represent the moves of the exercise and hear reports from his “staff,” both the students and non-students who are playing the role of neighbouring units.

The whole exercise follows a general scenario, but with a certain degree of leeway. “Our directing staff can guide their actions,” says Groulx. If in their planning, the students have missed something that the instructors feel they should cover, they can have the “enemy” bring it out subtly by moving a unit or undertaking an unexpected action.

Mimicking reality, the students have a relatively limited idea of what is happening and where in their battlespace. Looking at the icons on their computers, they know where their units are, but for the enemy’s actions they depend on information received by phone from their “subordinate units”—also played by contract staff. If it isn’t reported to them, they don’t know about it, although the instructing staff can “pull back the curtain” and show them the bigger picture if a point needs to be made, says Groulx.

This final exercise has seen the students take on roles very different from what they have been previously trained for—a logistics officer might be handling his brigade’s intelligence functions, and armoured officer her higher formation’s attack helicopters. Who gets assigned to what role, up to and including the brigade commander and brigade chief of staff, can “sometimes seem random,” but the instructors have been watching them for the better part of a year and have a fairly good idea of their strengths and weaknesses, he observes.

Talk to the students, even as they are embroiled in the midst of the exercise, and two points come through: Yes, it’s been a hell of a haul, but in the end it’s worth it.

Captain Patrick Dubuc from Sherbrooke sums it up: “It’s a big challenge, to balance your personal life, your civilian job and this course, which is almost full time. You don’t take anything else on your plate. You have to warn your wife, and your relatives too, that it’s very demanding for the family. But it’s very rewarding.”