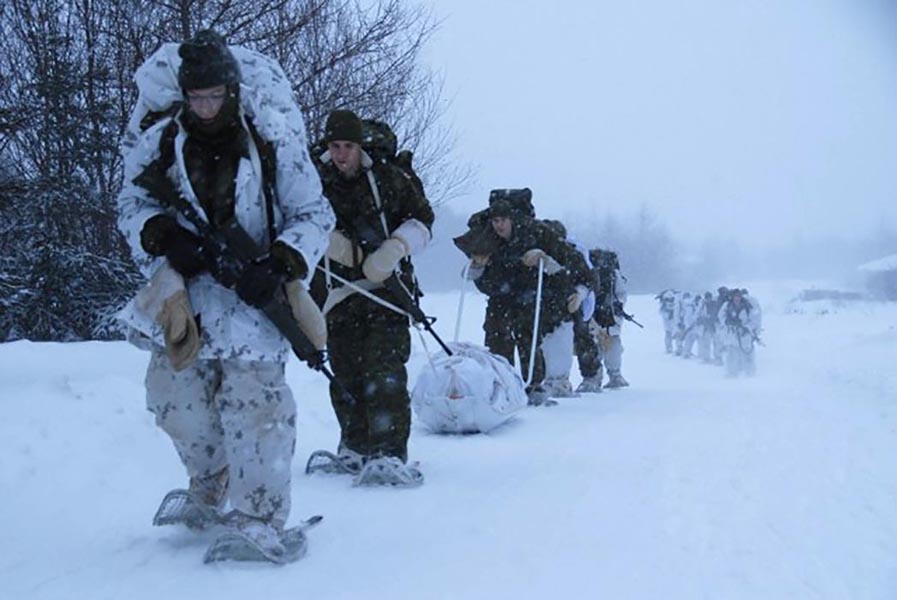 Large areas of North America, Europe and Asia lie within either the sub-Arctic or Arctic regions, making it critical for the Canadian Armed Forces to be prepared to conduct exercises and operations in them.

This is what brought Canadian Army Reservists from 37 Canadian Brigade Group (37 CBG) to Stephenville, Newfoundland and Labrador, where they took part in Exercise SIBERIAN HUSKY 2019 (Ex SH19) from February 1 to 3, 2019.

The purpose of Ex SH19 is to conduct training for the Arctic Response Company Group (ARCG), a sub-unit within 37 CBG consisting of approximately 100 personnel with a mandate to support Canadian sovereignty and communities in the far north. 37 CBG has more than 1,400 members from New Brunswick and Newfoundland and Labrador.

Hosted by 2nd Battalion, The Royal Newfoundland Regiment (2 R Nfld R), which is the lead unit for the ARCG, Ex SH19 was a major success in providing a dynamic and challenging exercise for 37 CBG soldiers and set the stage for a similar upcoming event: Exercise NORTHERN SOJOURN 2019 in Labrador in March 2019.

“These young people – and some who are not so young ­– join the Reserves partly because they are looking for adventure,” said Lieutenant-Colonel Mark Felix, the unit’s Commanding Officer. “Our members have access to robust training to prepare them for operations in all regions where cold weather occurs. I can’t think of anything more adventurous to do than move, fight and survive in a Canadian winter.”

Ex SH19 began with personnel and equipment being moved to Stephenville Airport by both commercial air and a Royal Canadian Air Force CC-130 Hercules. Soldiers then spent the weekend conducting patrols, setting up camp and practicing winter survival skills.

To be successful, the ARCG must be able to not only survive in austere winter conditions but also move, communicate, and conduct a variety of combat and non-combat operations.

It takes careful planning, attention to detail and experience to work in the Arctic. This is why 37 CBG leaders ensure that there are a series of training events to prepare soldiers for the challenge. They also plan for the risks associated with such training.

“In the unfortunate event one of our soldiers falls ill or is injured while on exercise or operation, first aid is provided immediately,” said Major John Bourgeois, the ARCG commander. “If necessary, emergency medical services are notified to ensure advanced medical care can be given without delay, if needed.”

Corporal Nathan Vlug, a 37 CBG member from Saint John, N.B, said he found the exercise to be worthwhile.

“I found my biggest challenge was the snowshoe walk,” he said, describing an infiltration task that required soldiers to trek into the woods on snowshoes, carrying full rucksacks and pulling sleds known as komatiks. “It was pretty tough, especially in a snowstorm, but it wasn’t anything that I couldn’t handle.”

The commander of 37 CBG, Colonel Shawn McPherson, congratulated everyone involved in the success of Ex SH19. He highlighted the role of 2 R Nfld R in hosting and leading the event, and the efforts of all 37 CBG units to force generate the soldiers required for the ARCG.

The ARCG leadership also thanked the local Stephenville Legion for giving the exercise participants a warm welcome. Ex SH19 was an exceptional opportunity for the soldiers from across 37 CBG to visit the western coast of Newfoundland and Labrador and engage with the local community.

“We are looking forward to seeing the ARCG in action during Exercise NORTHERN SOJOURN19 in Labrador,” Col McPherson said. “This exercise in Stephenville has set the stage for future success by providing a dynamic and challenging training environment for all.”