Events, injects and other predicaments 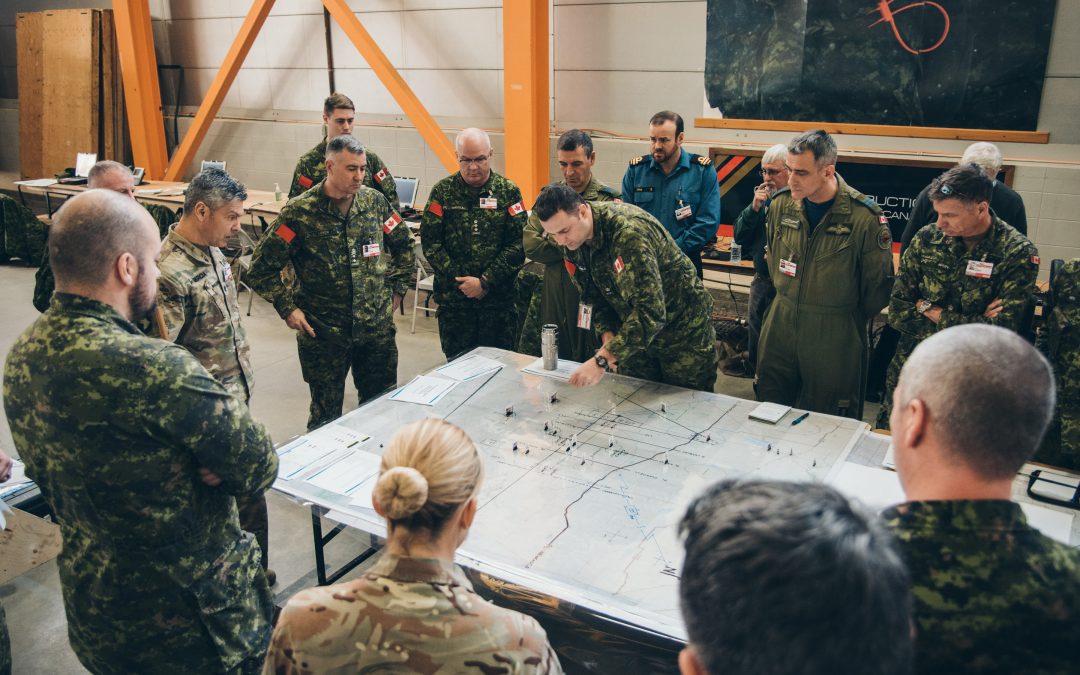 Artillery gunners pride themselves on timing and accuracy. So when a round misses its intended target, it can quickly become a nightmare. For Captain Valérie Harvey, it resulted in one of her more challenging days. Within seconds after the round was fired, social media lit up with chatter about an explosion at a local mosque. And within minutes, 5 Canadian Mechanized Brigade Group (5 CMBG) headquarters was fielding an angry call from an imam who had just recently provided valuable intelligence.

After confirming the fire at the mosque was likely caused by an errant Canadian artillery round, Harvey, the brigade’s public affairs officer, had the difficult task of advising the commander, Colonel Stéphane Boivin, on how best to respond. Her advice was “to grab the ball in the air,” meet with locals, acknowledge the error, and promise “a proper investigation to know what happened.”

“[This] is really difficult,” she acknowledged. “It’s humans that you are talking about. We have to make sure our response is human…and they need answers.” 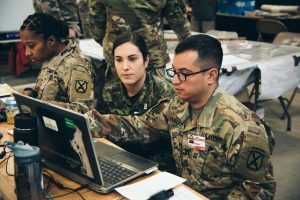 The scenario was simulated, one of many events intended to test the brigade headquarters during Exercise Unified Resolve in early February. But it was a reminder that poor decisions can have immediate repercussions.

“If the brigade treats the inject properly, the problem will normally go away,” said Lieutenant-Colonel Maurice Poitras, the chief of Formation Training Group with the Canadian Manoeuvre Training Centre and the exercise director. “If they ignore it, try to discount it, or blame the enemy, then it could get worse. You could have populations that are rebelling or the host government getting involved. It can get progressively worse.”

“If it becomes a primary point of evaluation, we push until they react,” added Major Jean-François Lambert, the senior public affairs officer with the Canadian Army Doctrine and Training Centre (CADTC) and one of a small team inserting information operations injects into the exercise. “The next war may not be one of kinetic measures. It’s important to move tanks, but it looks like the information environment may be as lethal.”

The Unified Resolve exercise series was created and first conducted in 2012 in response to shifting training requirements as the mission in Afghanistan wound down. It is the Canadian Army’s largest computer-simulated training exercise, designed to ensure the brigade headquarters and key subordinate units on the road to high readiness have the basic core skills and full spectrum warfighting proficiency to be deployed anywhere.

“I’m billing this as probably the most important Army exercise we are going to have this year,” said MGen Simon Hetherington, commander of CADTC.

As much as the exercise assesses the brigade’s ability to conduct offensive and defence operations, it’s also an opportunity to confront the commander and his headquarters with issues generated by interagency, non-governmental and public players, many role-played by contractors.

“This exercise gives that headquarters the ability to work with those that you wouldn’t particularly get [at Exercise Maple Resolve],” said Hetherington. “The great part about those contractors is, the people they bring in to do the job have done the job.”

The Unified Resolve scenario was designed and developed with the Canadian Army Simulation Centre (CASC) using a relatively new tool called the Decisive Action Training Environment (DATE), a contemporary operating environment adapted from the United States Army that provides the baseline documents and reference materials, such as enemy capabilities, from which scenarios can be custom built.

“We have a three-year timeline, going from peace support operations into full scale combat operations as well as counterinsurgency and stability operations,” said Poitras, who also serves as chief of CASC. “Each organization that wants to develop an exercise within the DATE decides where on the timeline they want to do the exercise, depending on the type of exercise they are looking for.”

Set against a backdrop resembling the Caucasus region of Armenia and Azerbaijan, the scenario involves Canadian support for a NATO-led multinational division – role-played by 1 Canadian Division headquarters – following the invasion of Atropia by its southern neighbour Ariana over access to oil resources. 5 CMBG, flanked by British and U.S. brigades, worked with an Atropian brigade to push back the peer enemy force and re-establish the international border.

In addition to conducting offensive and defensive operations, including an air mobile assault and a complex river crossing, the Canadian brigade also had to contend with criminal elements and an extremist organization known as the South Atropian People’s Army disrupting supply lines and fuel depots in their rear area. 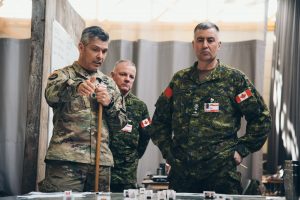 Among the dozens of role players, many with decades of military, government or NGO experience, were diplomats and representatives from the International Committee of the Red Cross and the Office for the Coordination of Humanitarian Assistance, forcing the brigade headquarters to manage an array of issues not directly related to combat.

“Those key leader engagements are an important part of helping [the headquarters] understand the bigger picture,” said Stephen Fritz-Millett, a former artillery officer now working for Calian Training as CASC’s comprehensive approach activity lead for the exercise. Early dialogue with people and organizations moving around the battlespace – entities over which you have little or no control – can mitigate problems later, he noted.

In addition to the inadvertent strike on a mosque, exercise events included the downing of a CH-147F Chinook, necessitating a large scale medical evacuation; the impact on manoeuvre following an attack on a fuel bunker and then a convoy; and a planned religious pilgrimage in an area the brigade was about to attack. Without tipping their hand about the mission, the brigade had to engage their chaplain to help the imam find an alternative route for his 10,000 followers.

“It was very interesting to see the chaplains in a role [religious leader engagement] that, in the past, they never would have been in, providing the commander with advice on how to conduct operations to mitigate the effects of a potentially highly disruptive activity,” said Fritz-Millett. “It’s new doctrine that we’ve been able to help the chaplaincy branch incorporate into simulated operational settings.”

Canada’s emerging doctrine on child soldiers was also trialed in a preliminary way, as well as more recent contentious issues such as detainees – an Arianian soldier was captured with a Canadian passport.

“All of the experiences that we have had from Afghanistan, things that are sensitive, will challenge the [training audience],” said Hetherington. “How do you react to it? Who needs to know? How do you report it? How do you deal with social media? How do you deal with a hostile public when you’ve accidentally done some damage to one of their key structures? How do you answer those incredibly important questions from Canadians that pop up on Twitter while you are in the midst of fighting a peer enemy?”

Unified Resolve has become one of the most complex exercises the Army conducts, involving a year’s worth of planning and scenario writing, and two weeks of set-up, for six days of computer-assisted training. All up, over 1,200 military, contractor and civilian personnel were directly involved in Exercise Unified Resolve 18, the largest one yet.

“This is hard stuff, and the only way you get better is through sets and reps,” said Hetherington. “As long as we see continuous progress by the brigade through the challenging staff processes they need to do for planning, how that commander is executing his command, how information flows up and down, then we are succeeding.”