Electronic warfare: A holistic approach to the electromagnetic spectrum 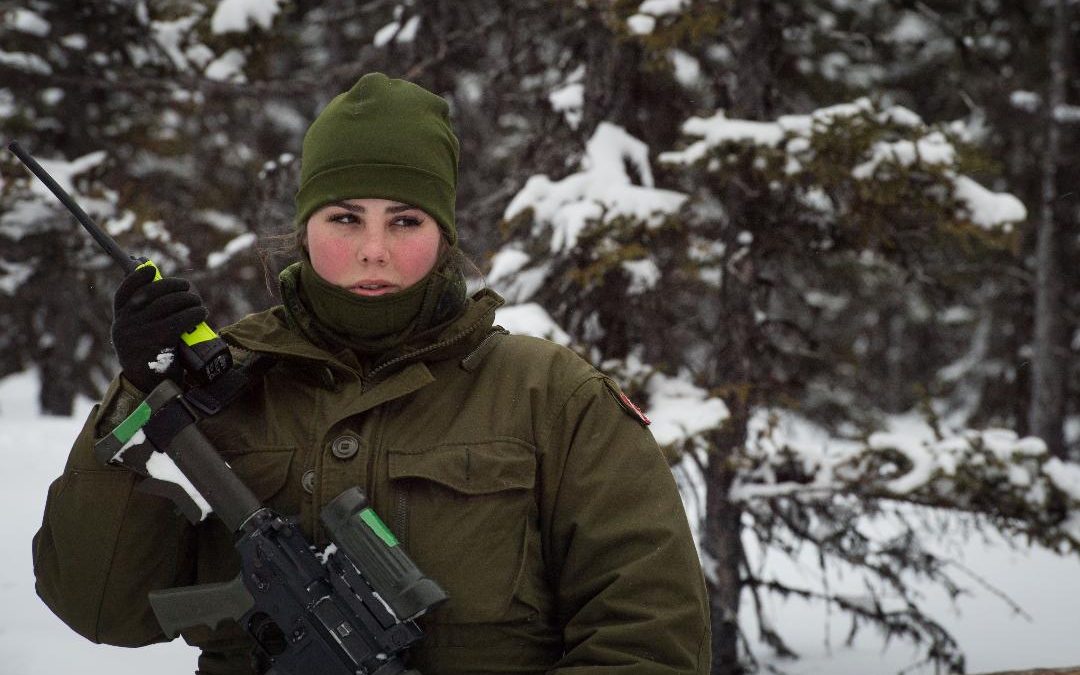 The terms “leading edge” and “outside the box” tend to be overused when discussing evolving technologies, but they’re truly applicable to the Canadian Forces Land Electronic Warfare Modernization (CFLEWM), a project that envisages improved interoperability, not only between the various Canadian Army elements, but also with our air and naval commands as well as our allies.

It had slow start – the project entered options analysis in January 2014, but was not in the Department of National Defence investment plan at the time – and only gained broader recognition more recently with the release of the government’s defence policy in in June 2017. “Technology and the changing nature of conflict itself have fundamentally altered the landscape on which we operate,” Defence Minister Harjit Sajjan said at the time. “That rapid change will continue, so we must be more agile than in the past.”

The project moved a critical step closer to reality in early February with the publication of a Letter of Interest (LOI) to prospective suppliers, posted by Public Services and Procurement Canada (PSPC). The deadline for industry responses is May 13 and an industry day is proposed for this summer.

The goal is an upgradeable broad-ranging capability to sense and act within the electromagnetic spectrum and to shield friendly forces. “These capabilities will contribute to gaining the initiative and surprising the enemy by selectively exploiting or denying adversarial use of the electromagnetic spectrum in order to understand the potential adversary’s intent, prevent them from gaining a clear understanding of the operational environment, and ensure that they cannot impede friendly manoeuvre through the use of electromagnetic triggers,” PSPC stated.

There is no doubt the project’s outcome will need to be “leading edge”, enabling the Canadian Armed Forces (CAF) to operate “outside of the box” of current EW resources with troop- and vehicle-borne gear. The challenge of making it happen is being addressed by two teams from the Royal Canadian Corps of Signals, a component of the CAF’s Communications and Electronics Branch.

Major Darrell Williams, a computer scientist, is the project director; Major Eric McFee, a computer engineer who has been involved with EW for over a decade, is the project manager. “I set what we want,” Williams explained, waving at McFee during a joint interview. “He figures out how.”

EW effectively came into its own during World War II as the Allies reacted to intercepted enemy intelligence. More recently, the Canadian Army used it in Afghanistan, though details are understandably secret – and more likely top secret.

However, Canada did use EW for protection against improvised explosive devices. Insurgents would connect the IED to a receiver and a triggerman waiting for vehicles to pass would signal the IED to detonate. Collaboration with allies yielded a system which transmitted a more powerful signal that rendered the receiver electronically deaf, unable to receive the detonation command.

As for the broader EW world, McFee said, “the way we’ve visualized and conceptualized it has changed quite a bit over the last couple of decades,” to the point where the electronic spectrum is considered “a domain, a place, similar to how we have started to look at cyber.” 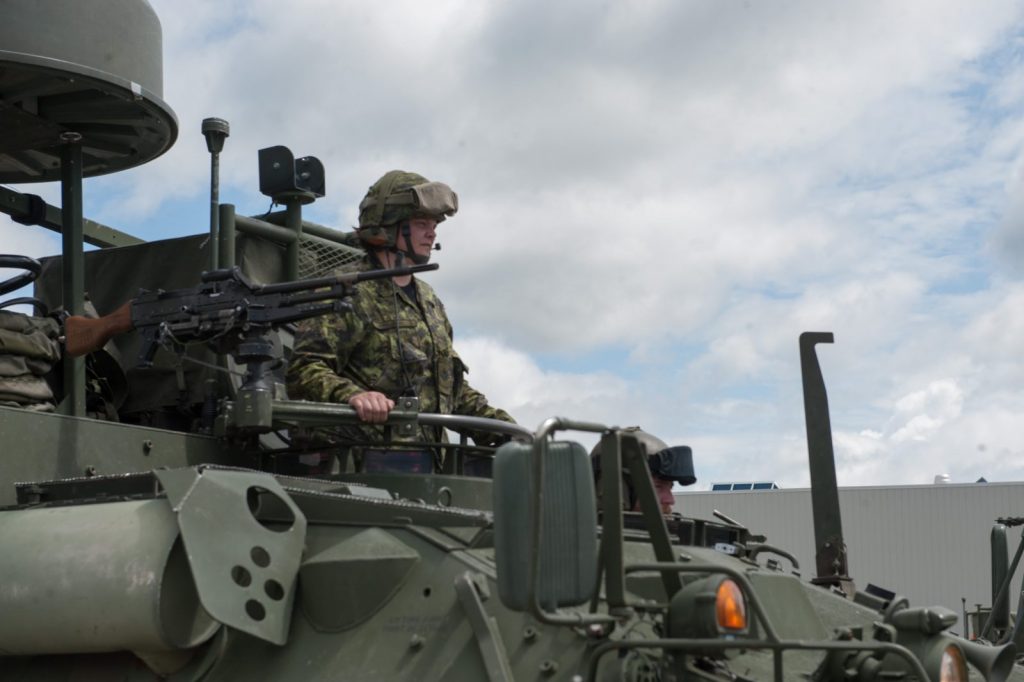 On the parade square during change of command of 21 Electronic Warfare Regiment in June 2016 at Canadian Forces Base Kingston. Photo: Cpl Trevor Matheson

Not everyone looks at it the same way. The Army’s approach tends to be holistic in that all EW techniques and technologies should be used to not only exploit the electromagnetic spectrum, but also to impose the Army’s will on someone else.

So, given the overlap between electronic and cyber, how is it handled? “It depends how you define ‘cyber’,” Williams replied. “For some people, if it runs through silicon, it’s cyber. But that’s not a great way of conceptualizing it, because it ignores all the ‘social’ levels of cyberspace. If it’s electromagnetic, then it’s EW. But, again, that ignores the littoral space between the two. It’s not entirely clear, so it’s still being worked out.”

The Royal Canadian Air Force and Royal Canadian Navy use EW mainly for platform protection. In the Army, it’s more about identifying adversaries’ intentions. Early systems used in some of the Army’s Light Armoured Vehicles and Leopard 2A6M main battle tanks to counter radio-controlled IEDs in Afghanistan “just made a mess of the spectra” by continually transmitting on certain frequencies the Army suspected were being used by the Taliban.

This has evolved to a reactive system in which an adversary’s signal is sensed and the countermeasure targets that particular spectrum. There’s also a hybrid evolution which puts power out in certain spectra while detecting others and reacting; all data are coordinated for better overall situational awareness.

McFee said the current Army approach to visualizing the combat environment has relied on omnidirectional signals in three-dimensional operations. “We believe that’s not going to cut it anymore for visualizing the use of the spectrum,” he explained. “We need visualization that allows us to merge a three-dimensional land picture with something else that is more specialized to the electromagnetic spectrum. What that’s going to be, we don’t know [but it is] a big piece of the project.”

The Army project is unique among key allies in that it could result in “a command piece overlying everything so that when we’re doing anything within the spectrum, you want the adversaries to lose confidence in their equipment,” said Williams. “You want to able to mess with their concept of what’s going on … We’re countering the adversaries’ ability to manoeuvre within the spectrum, and facilitating our ability to move within it.

“By having this complete capability with the command piece overriding it, you can connect it together more comprehensively. The battle group would be roaming around the battlefield, their force protection boxes talking to each other, so they would be able to sense and act at the same time. That’s tied into the conventional EW capability.”

McFee added that there’s a seminal need for communications gear CAF-wide to do more things simultaneously – not technologically viable in the past. But as the Army project began to spool up, it was suggested radios could be sensors too. “Radios are made to listen to the electromagnetic spectrum. When not doing their communications job, why can’t they be collecting information?” he said. The initial response was that it couldn’t be done, but software-defined radio has evolved as a core technology, enabling radios to be easily reprogrammed to do different things.

As the potential CFLEWM budget indicates, there is “a significant dollar value” to industry. Apart from some early DND funding and Defence Research and Development Canada’s development of a technology demonstrator, industry is expected to invest significantly. While much of allied EW manufacturing expertise is held by corporations based in the United States and Britain, Williams hopes a Canadian-based company will be a key player.

He also said that core allies, having “recognized that this is where we all eventually need to go,” are being briefed. “Programmatics in different countries mean that they are different points in their procurement processes.” That includes the US Army, which recently announced it is pursuing a similar approach.