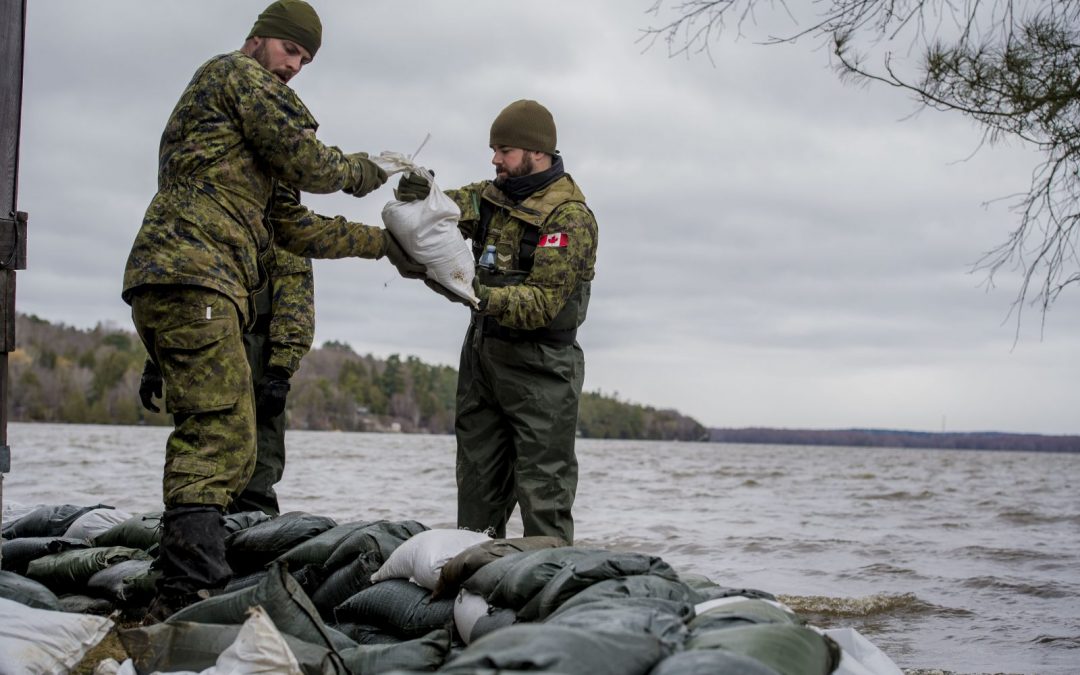 When the LAVs of Duke’s Company, 1st Battalion, Royal Canadian Regiment (1 RCR) squeezed up the congested roads in Constance Bay, Ont. on the morning of April 26, the spirits of the local volunteers who had spent days filling sandbags to protect homes from flooding were lifted. The race to save homes in the small Ottawa River community was in full swing and every hand was required in the effort to build the much-needed barriers around hundreds of houses and businesses.

As the vanguard company of 2 Canadian Mechanized Brigade Group (2 CMBG) and its Immediate Response Unit (IRU), Duke’s Company was the first unit to arrive in the National Capital. Backed by the full Canadian Armed Forces (CAF) structure behind Operation Lentus, they were prepared and well supported.

The mission would be in many ways a model for how the Army effectively responds to Op Lentus events. “The Immediate Response units are high readiness units maintained at each Army Division. They are on standby to provide soldiers toward any domestic crisis on short notice,” explained Lieutenant (N) Tomas Ionson, the J3 Domestic Operations with 4th Canadian Division’s Joint Task Force Central (JTFC) headquarters. “When time permits, a task tailored force of Canadian Army Reservists are stood up to respond during an Op Lentus event, [but] in the Ottawa River spring flood events of 2019, the immediate nature of the request for CAF support meant that a mix of IRU and Reservists was required.”

Op Lentus is the CAF response to natural disasters in Canada. The military maintains a command structure that can respond to any sized event with whatever resources the situation demands. At the highest level, the Canadian Joint Operations Command (CJOC) is integrated with the Government Operations Centre (GOC) in Ottawa, where it responds to calls for assistance and coordinates overall CAF responses.

JTFC in Toronto is one of the six regional joint task forces. Like the others across Canada, JTFC and its Regional Joint Operations Centre (RJOC) partner with the province’s Provincial Emergency Operations Centre (PEOC). The PEOC is the lead provincial agency for disaster responses in Ontario. Op Lentus provides CAF support to the PEOC’s priorities.

While the request for CAF assistance for flood relief was filtering through its approvals, the RJOC was gathering information and planning with the PEOC and the regional office of Public Safety Canada. A CAF regional liaison officer (LO) was briefed up and when the mission to support flood relief in the National Capital Region was approved by the federal government, the LO teamed with a provincial emergency response field officer and moved to the City of Ottawa Emergency Operations Centre. The LO began gathering local intelligence and situational awareness.

When that CAF approval for flood relief was given, 2 CMBG in Petawawa received orders to release its IRU from its JTFC headquarters. Some 400 personnel strong, the IRU is always prepared to deploy on between eight- and 24-hours’ notice to move. However, as the vanguard company for the IRU, Duke’s Company is on 12 hours’ notice. 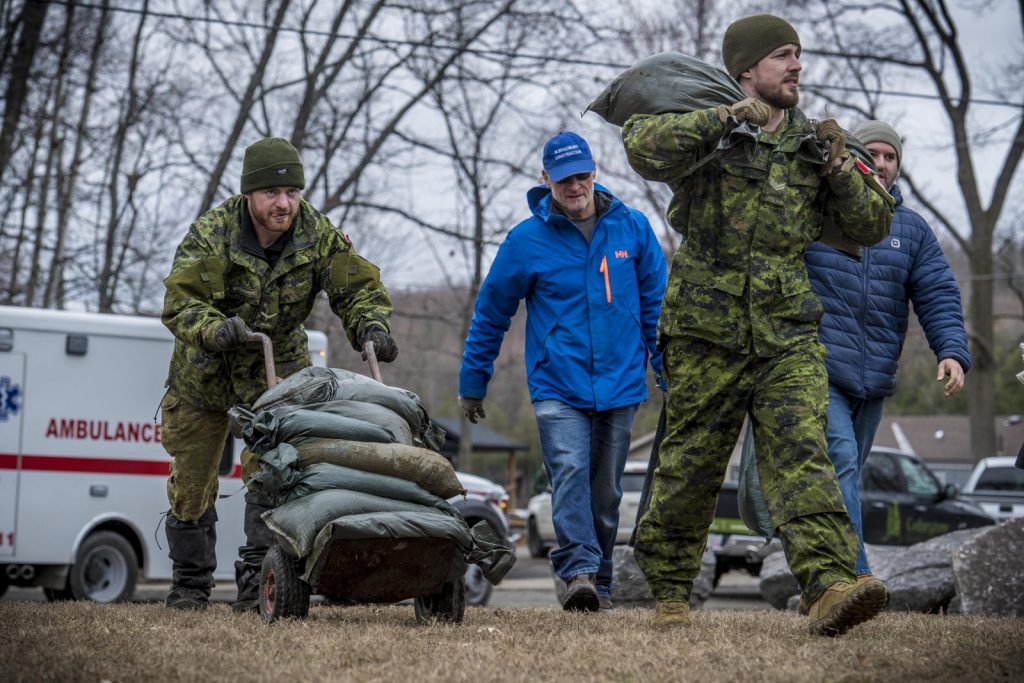 After Lieutenant-Colonel Aaron Williams, the commanding officer of 1 RCR, gave Duke’s Company its orders, they quickly organized, planned their route to Ottawa and into the city, and the 120 members of the vanguard were on the Connaught Ranges in Ottawa’s west end just four hours later. They were joined the next day by members of 2 Combat Engineer Regiment.

The Duke’s Company’s reconnaissance vehicles entering the riverside village of Constance Bay early that morning encountered a long line of privately-owned pickup trucks waiting to be filled with sandbags for the teams building sandbag walls along roads and around houses.

Angela Bernhardt was a manager with West Carleton Disaster Relief. The local group was coordinating the volunteer response in the rural ward that forms the extreme west of the City of Ottawa. “City staff were invaluable but they were spread thin given the long shoreline within city boundaries. We were ecstatic when the first troops arrived and began to organize their assistance,” she said. “We knew what needed to be done, but we needed more hands and more vehicles. The Army was a welcome addition.”

Coordinating the Op Lentus activities with those all-important local volunteers would prove critical.

“There was no change to what we do on operations,” said Duke’s Company commanding officer Major Cullen Downey, whose company had recently completed a tour in Latvia with Operation Reassurance. “The best information we can get is from the people on the ground who live there. In Latvia and the Ukraine, the best idea of what was actually happening came from the locals.”

In this case, the local volunteers from West Carleton Disaster Relief provided that all-important “boots on the ground” perspective. The Duke’s Company command post (CP) was co-located within the same room as the volunteer staff of WCDR.

“They added important detail to what the City and our IRU headquarters had provided,” said Downey. “As the event progressed, the local organizations were valuable partners who provided us with detailed information on how and where our resources were most useful. In most cases, we were able to respond quickly and simply shuffle our on-site resources with no further approvals or orders required from the IRU headquarters or the city.” 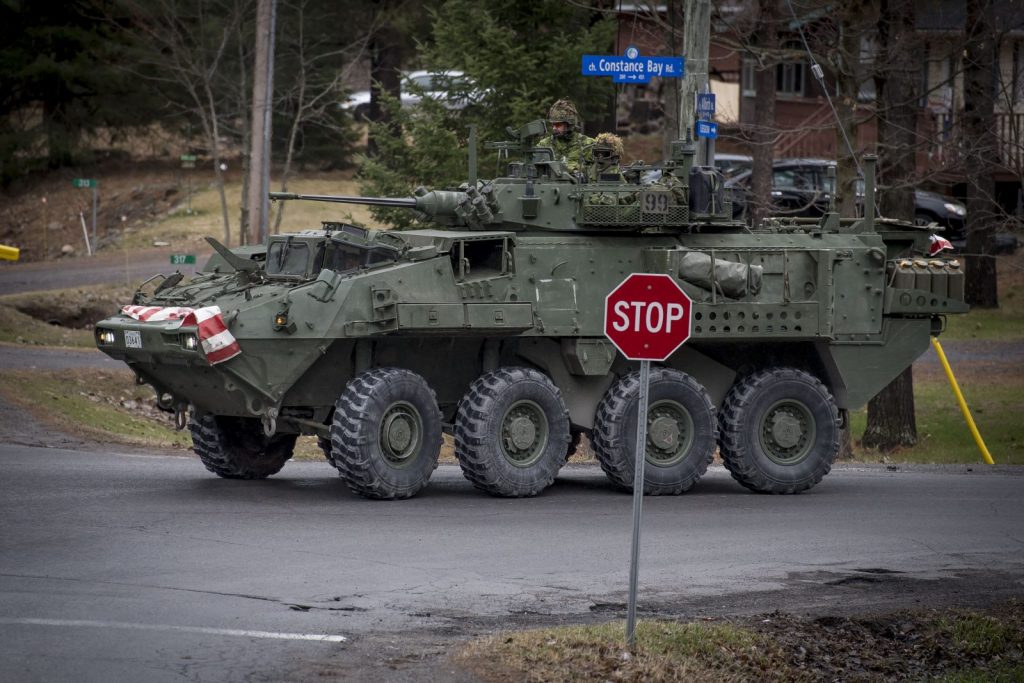 The complicated situation on the ground was typical of the kinds of environments encountered by local Op Lentus command staffs across Canada. Constance Bay is a small rural village, but it is inside the boundary of the City of Ottawa so the city’s Emergency Operations Centre was in overall control of the response.

In this case, city resources included numerous personnel and vehicles. However, in addition to city staff, Ottawa Volunteer Search and Rescue (OVSAR) were deployed to assist in Constance Bay under the supervision of the city. Team Rubicon, a volunteer group comprised of former CAF members, were also working under the direct supervision of the city’s Emergency Operations Centre. Mennonite Disaster Service was also working independently in the same area with a significant number of resources.

Some days up to 700 civilian volunteers were directed and cared for logistically by WCDR, which operated a monitored Facebook page and phone lines to report problems and direct volunteers.

It was into this complicated command and control environment that the 1 RCR and 2 CER troops were deployed. Having a CP co-located with the WCDR group was especially effective in bringing order to the response.

“As requests for sandbags, transport for them or for people to build walls came in to our organization, we could turn to the military across the room and get an almost immediate response, and we knew that if the Army said they could help, then we could move on to other tasks,” said Bernhardt. “The local high school unexpectedly filled eleven thousand sandbags in one morning and the Op Lentus personnel from the combat engineers responded with large trucks to transport the filled bags from the school to the sites they were required. What would have taken the civilian pickup trucks all day to do was completed in three hours.”

Success in flood relief is measured in the number of homes saved and the easing of distress to affected families.  Working alongside and in support of local residents, Op Lentus saved dozens of homes and made a major contribution to the river battle of 2019 in the nation’s capital.