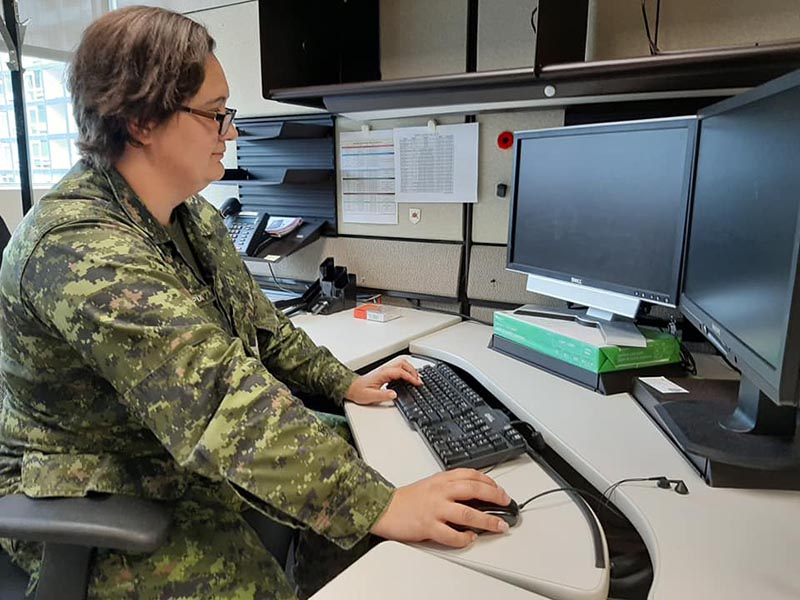 A Canadian Army (CA) member is Canada’s first female Cyber Operator. She says she prefers to stay focused on the pleasures of the job rather than dwell on her place in the ongoing history of female advancement in the military.

“In all honesty I don’t think it really changes much,” said Corporal Andrea Pixley, who works out of the Canadian Forces Network Operations Centre (CFNOC) in Ottawa.

“There is no difference between a male or female – or others – who qualifies for this trade and has a passion for it. At the end of the day were all wearing the same uniform so I don’t really see it as a big deal. It’s interesting little footnote I guess.”

Cyber Operators are a relatively new, and necessarily secretive, addition to the Canadian Armed Forces who work to protect both military and civilian computer networks from attack as well as conducting cyber operations against adversaries.

Cpl Pixley joined the CA more than a decade ago, taking on the role of Communicator Research Operator, which involves the interception and analysis of electronic transmissions.

The Cyber Op trade, she explained, requires skills from her previous job and several other trades. She called Cyber Op a “weird hybrid” of skillsets both technical and creative.

“I have more of an analytical background but then my IT colleagues understand how things are physically put together and so we build a much better bigger picture together. You need to take from all these different areas and that’s why over time Cyber became a trade in itself.”

A native of Alberta, Cpl Pixley holds an arts degree – background she said is helpful in communicating with colleagues. And communication is vital to her role in the unit’s Operations Cell, where she acts as a co-ordinator to ensure the right tasks go to the right people or re-direct issues elsewhere as needed.

“We have to filter out what actually needs to be dealt with at our unit and what needs to be done with other areas,” she said. “I have to be able to take whatever technical data I have and translate it to get people to work on things, resolve issues or in some cases even just a help a user understand something.”

A passion for technology is a definite pre-requisite for the tasking, Cpl Pixley noted. While her civilian educational background may not suggest such an interest, she is extensively self-taught in the DOS and Linux operating systems, as well as other aspects.

“I fix my friends’ and family’s computers in my spare time and, since I never had any formal training in how to fix hardware, it has been a fun side adventure. I also play video games.”

Cpl Pixley said one of the pleasures of the job is that she is effectively solving a new series of puzzles each day.

“It doesn’t matter if it’s a technical puzzle or if I’m dealing with a weird email that comes in – I need to figure out what happened. What is this person actually trying to say? What actually happened to the computer system? It’s just trying to bring the whole picture back together. That for me is really rewarding.”