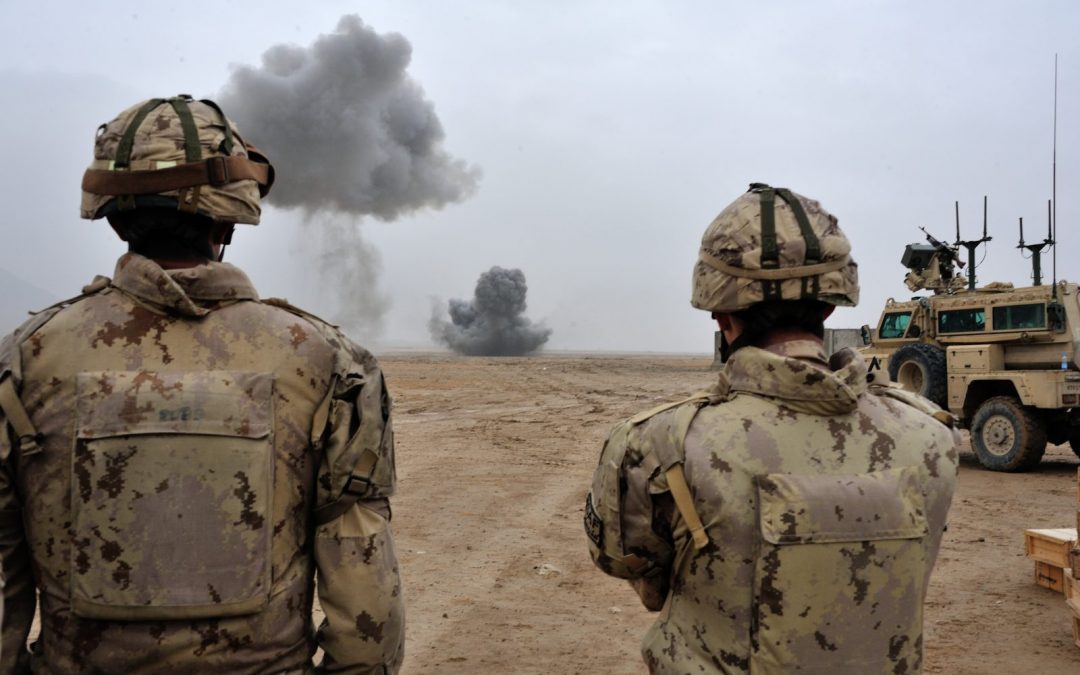 Many of the lessons of Afghanistan were hard learned, none more so than countering the threat of improvised explosive devices (IEDs). The blast of roadside bombs was by far the greatest cause of injuries and fatalities during the conflict.

The Canadian Army responded with the rapid introduction of a suite of explosive ordnance disposal (EOD) tools and heavily armoured expedient route opening capability (EROC) vehicles for engineers – the Husky to detect threats, the Buffalo to investigate them, and the Cougar to transport EOD personnel – using urgent operational requirements to steer the projects through the procurement system.

While the initial bang of IEDs was a wake-up call to the gap in the Army’s capability at the time, the response was an impressive array of detection and defeat tools considered to be among the best in theatre.

“The technology the adversary has will always increase, therefore we must increase our technology as well and maintain the advantage against explosive threats.”

Through a project called Advanced Improvised Explosive Device Detect and Defeat (AIEDDD), also referred to as initiative 37 in the government’s defence policy, Snelgrove is identifying the requirements for a four-component program that includes updating and modernizing EOD and IED operator suites, replacing EOD robots, and acquiring standoff detect and defeat systems – a notable gap in the Army’s capability.

The first will likely be the most straightforward. Protective wear such as bomb suits and helmets, viewing aides and x-ray systems, water-projecting disrupters, even wire cutters and other basic tools, are reaching the end of their shelf life or have the ability to be improved upon significantly.

“We are seeing companies demonstrate technologies that are continually improving, some significantly – there have been magnificent improvements in portable x-ray technologies, for example,” he said.

The second should also be relatively uncomplicated. The Army currently operates a family of three EOD robotic systems. The largest, the German manufactured Telerob Explosive Ordnance Disposal and Observation Robot (also known as Teodor), which is able to pull a car, is expected to remain in service for another 10 years and will eventually be replaced through the Army’s Future Family of Unmanned Ground Vehicles project.

But the mid-sized Vanguard Mark III, manufactured by Allen Vanguard, and the smaller Cobra, from the ECA Group, will need upgrading or replacing by the time AIEDDD delivers around 2025.

The other two components – new systems to detect and defeat IEDs from a distance – may require a deeper dive into emerging technologies. At present, the Army detects explosives with the Mark I eyeball or through ground penetrating radar (GPR) and metal detection mounted on the Husky.

“The problem is that once you find a device, you are on top of a device,” said Snelgrove.

The preferred solution is an unmanned ground vehicle (UGV) with a Polaris or Argo-like chassis, mounted with a long-range sensor suite of some 18 potential technologies, including long wave, passive infrared, atomic spectroscopy, and hyperspectral remote sensing.

“It could be two or even three small vehicles, with a wire detector, a magnetic duplicator system, ground penetrating radar, an IED neutralization tool, etcetera,” he said.

Defeating an IED is currently done with a disruptor, either handheld or mounted on a UGV, plastic explosives or with a round from a .50 calibre rifle, all of which have their problems. The solution for true standoff defeat, Snelgrove said, will likely come from emerging capabilities such as a high energy laser, a high-powered microwave system, or fuel-air explosive rockets. Electronic jamming offers an option for remotely controlled IEDs, but it is only a part of the eventual requirement.

“In my opinion, a laser is probably the best option for stand-off defeat in close quarters like an urban environment. Other high-energy platforms work very well in an open environment,” he said.

A fifth aspect to the project, which is expected to enter the options analysis phase of the procurement cycle in 2019, may be an unmanned aerial system, likely a quadcopter, to enhance operator situational awareness. 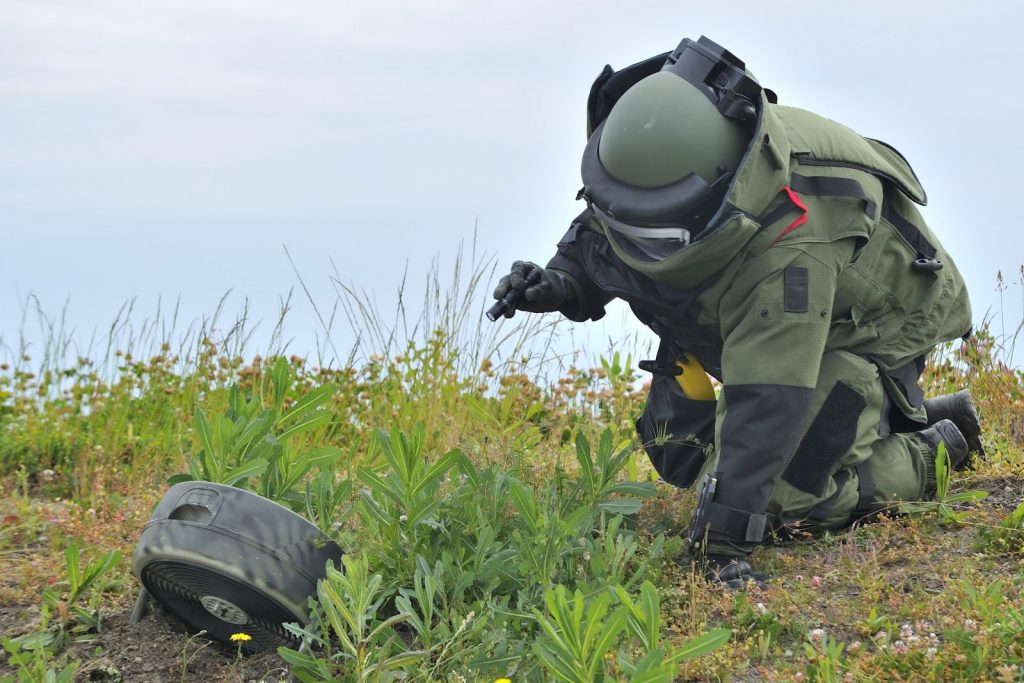 Snelgrove, an engineer, is refining the high-level mandatory requirements, but he noted both the detection and defeat systems will need auxiliary power units. To fit on a new UGV, the detect components will need to be fairly small. But high-powered microwaves or energy lasers will require large power and cooling sources and therefore a larger vehicle. The Cougar or Buffalo might offer a short-term solution, but he’s also talking with the Armoured Combat Support Vehicle (ACSV) project, which is seeking a replacement for the M113 and LAV 2 Bison vehicles, and with the team delivering the new Textron Systems Tactical Armoured Patrol Vehicle (TAPV).

“The ACSV is going to deliver almost around the exact same time period as AIEDDD,” he said, “so we are in talks to see if a system like this could be incorporated into an engineer variant of the ACSV.”

Then there is the network. While several UGVs, working in tandem with a quadcopter, will have the sensors to detect an IED, determining how to respond will likely be done from a control centre in a support or command vehicle or a headquarters.

“You are going to have robotic systems with a communications architecture that can feed the data back through a processing system in real-time, so the computing, the robotics, the communication, the sensing – it’s a bit of a technical challenge,” he said.

Not only must the data be secure in a signal-degraded environment, the UGVs will need algorithms to operate autonomously if the link is jammed, such as returning to a home vehicle or completing the task. Consequently, he’s also looking to leverage jamming and anti-jamming capabilities that might be delivered through the Army’s electronic warfare modernization project.

Other considerations at this early stage of the project include all weather, all conditions sensing tools, handheld detection capabilities for dismounted soldiers, heads-up displays for UGV and quadcopter operators, and the ability to defeat buried threats.

“Buried threats pose a demanding challenge,” Snelgrove acknowledged. “There are limited methods to both detect and defeat them.”

The introduction of new equipment can often come with a steep learning curve for operators, but Snelgrove suggested the greater challenge might be for the maintenance technicians tasked with keeping robots and specialized sensors humming in austere conditions. “These new systems will likely require robust technical maintenance,” he admitted.

When it was first launched, the AIEDDD project was tasked with addressing the threat of swarming unmanned aerial systems – “you can interpret them as an explosive device” – but that challenge has since been assigned to the ground-based air defence (GBAD) project. 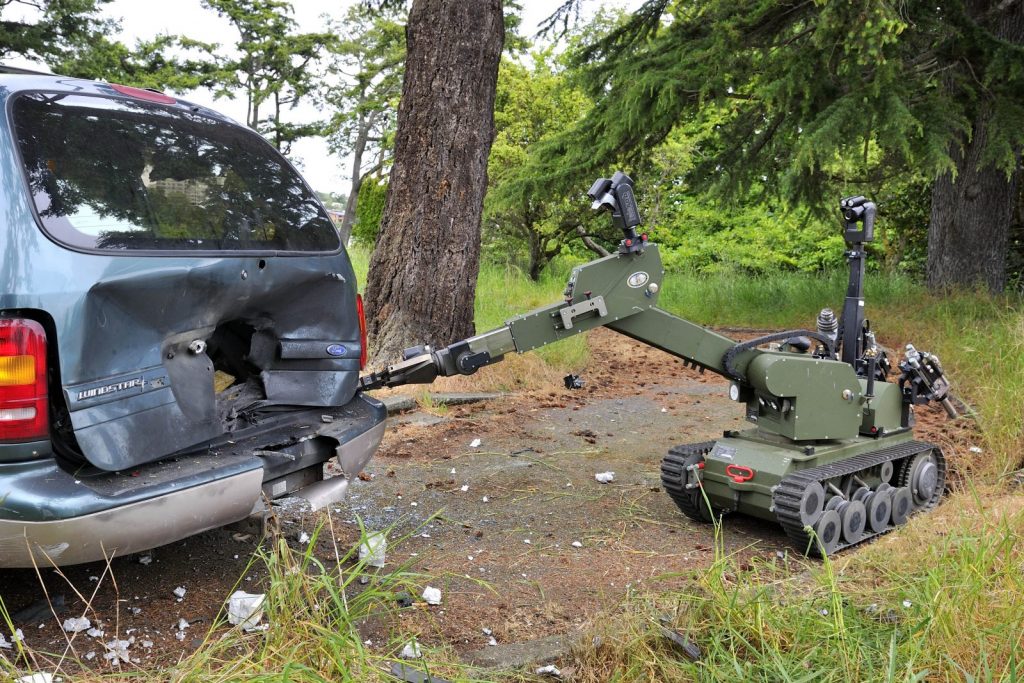 While AIEDDD is intended to upgrade equipment and close gaps in the Army’s current capability such as standoff detect and defeat, it is also a stepping stone to future projects, including the future family of unmanned ground vehicles (FFUGV) and rapid route clearance capability (R2C2), what Snelgrove calls EROC 2.0, a far more expensive program that will likely tap into artificial intelligence (AI) and other autonomous technologies.

“Each project leads into the next one very deliberately in terms of the technology that it is procuring,” he said. “The counter explosive world will evolve even further after that with the area access control project, which is a new method of denying an area or opening it with smart mines and smart fuses. I’m not sure how fast AI will evolve for that purpose, but I believe it will vastly improve our capability.”

Identifying which technologies will work best is being done in conjunction with Defence Research and Development Canada scientists, who have mounted high energy laser and directed energy waveform systems on a Cougar as part of ongoing concept trials. And he’s also drawing from allies, particularly the United States, which is keenly investigating detection technology and robotic applications.

But Snelgrove believes industry will have solutions readily available by the time the project reaches the request for proposal stage in the early 2020s and the equipment is delivered beginning in 2025.

“I don’t have any concerns on the technology readiness level,” he said. “But this is a very heavy technologically-focused project. We’re literally talking about robots with lasers on them.”

“Some of these things will rewrite our standard operating procedures (SOPs) and our rules of engagement,” he added, noting the legal and ethical issues that will affect the use of laser weapons, including United Nations protocols. “We have to overcome those issues.”