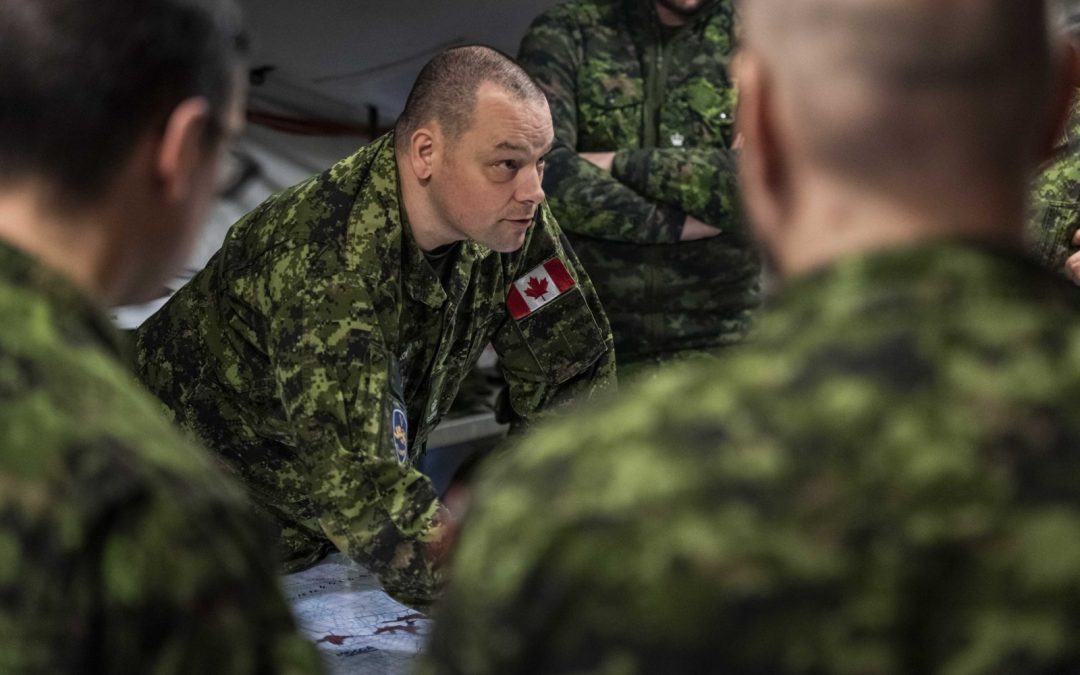 There’s a classic line sometimes attributed to Samuel Mayer, the legendary Hollywood mogul. When asked what made for a great movie, he said. “Get your hero up a tree, then throw rocks at him.”

Exercise Unified Resolve boasts none of the characteristics of a Hollywood classic, no lantern-jawed hero, no wisecracking female lead, but it certainly follows Mayer’s rules: For six hectic days in February,  the headquarters components of 2 Canadian Mechanized Brigade Group (2 CMBG), with some elements from 1 CMBG and 5 CMBG networked in, found themselves up the military equivalent of a simulated tree, while military personnel and civilian contractors working from the Canadian Army Simulation Centre (CASC) in Kingston tossed metaphorical rocks at them.

In a nutshell, the scenario for the 2020 version of Unified Resolve boiled down to this: Aggressive Ariana and its neighbour, Atropia, were at loggerheads, the result of historical divisions in an unstable region and third-party influences. The situation had so deteriorated that a multinational force, of which 2 CMBG was a member, found itself tasked to protect the peaceable Atropians. The Arianians were not to be cowed, however, and their forces crossed the border. Given a mandate by the United Nations, the multinational division then had to push out the invader.

The 1st Canadian Division headquarters played the part of the higher formation, and reflecting the multinational nature of the force in the simulation, a group of soldiers from Britain’s Household Cavalry Regiment served as the divisional reconnaissance unit, the task they carry out in for the British Army in addition to their role of providing the mounted troops who guard the Queen.

In the past, the focus of the exercise has been on asymmetric warfare. In the last couple of years, however, the emphasis has shifted to a near-peer adversary, one equipped with mechanized infantry, artillery, armoured vehicles and combat aircraft, according to Lieutenant Matt Howse, the public affairs officer for the Canadian Maneuver Training Centre, the formation in overall control of the exercise.

The broad strokes of the exercise come from an operational training tool known as DATE (for Decisive Action Training Environment) developed by the United States Army. The particular version in use for Unified Resolve – there are four – is based on the Caucasus region of central Asia. DATE generates the challenging landforms and numerous waterways simulated on computer screens throughout the exercise, and “bakes in” some of the general history and politics of the area. From this, the planners work up a scenario that tests the training audience – 2 CMBG in this case – in a variety of battle tasks: a river crossing, for example, or dealing with a possible chemical warfare decontamination. All are designed to test the brigade’s ability to plan operations, exercise command and control, and synchronize and control the employment of resources.

Unified Resolve is a dynamic exercise and tactical success or failure is entirely in the hands of the training audience. Were the brigade to be routed or rendered combat ineffective because of casualties, however, the controllers could step in and make subtle adjustments to keep the exercise going and provide useful lessons.

While the overarching scenario is demanding enough, the brigade staff also have to deal with “injects,” the sort of real-life situations that can come up in the course of an operation, but can’t be built into the simulation or assumed. Anything from the crash of a helicopter to a report that the enemy is using child soldiers, they can potentially distract from the operation, but have to be dealt with. Just one more set of rocks to pitch at the training audience once they are up the metaphoric tree.

Unified Resolve’s elaborate scenario and its set battle tasks involved a year-long design and development effort that also included the establishment of a network to link three different Canadian Forces Bases, so that 1 CMBG and 5 CMBG could also participate.

The battle tasks are part of the groundwork for 2 CMBG as it prepares to become the Army’s high readiness brigade effective July 1. In that role, 2 CMBG will be responsible for providing personnel and material support for the current operations in Latvia, Ukraine and Iraq, as well as providing individual augmentees for various deployments.

The injects as much as the scenario are about preparing the brigade for the unexpected. As Colonel Jason Adair, 2 CMBG’s commander, put it: “I am not worried about any of those missions, I am worried about the one we don’t anticipate. We’re training to fight and win the first battle of the next war.” 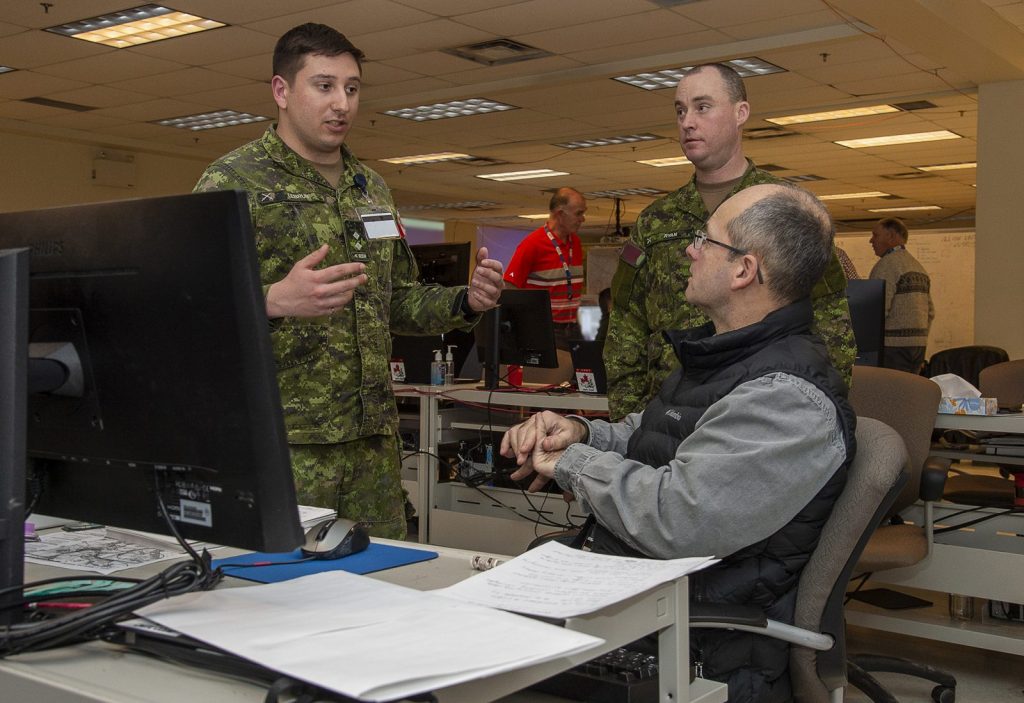 For many (though not all) of the participants in Unified Resolve, their connection with the exercise is through a computer screen. To an outsider at least, what they see isn’t greatly different from computer games played for fun, or even military board games of yore: The base is a map, showing contour lines, towns and roads, military units are shown as little rectangles, blue for good guys and red for the bad. Roll over these with your mouse, and it’ll tell you precisely what the unit is. Minefields, anti-tank ditches and, for some reason, refugees, appear in green. There are messaging systems on-screen, and a VOIP capability.

What is remarkable, however, is the degree of ‘scene-setting’ needed to create this simulated environment. What is seen on-screen is the product of not one, but more than a dozen software systems working together. For example, the images picked up by UAVs flying over the battlespace are created by an imaging software called Virtual Battlespace Simulation, working in conjunction with DLCSPM (Director of Land Command Systems Project Management) 4609 Video. Another software, JCATS (Joint Conflict and Tactical Simulation), is great for simulating the movements of aircraft.

Making sure they all work together is in no small part the job for ADGA Training and Simulation Engineering Centre. “These systems aren’t necessarily compatible right out of the box,” said Dan Bergeron, a former signals officer who leads ADGA’s team. Working in their lab in Kingston, the company’s software experts test and develop ways to configure the systems, creating what is termed the “Simulated Software Baseline” that the Army needs to carry out such complex exercises. Because software is constantly being updated, and new programs created, the work on the baseline runs year-round. Work on next year’s Unified Resolve began almost as soon as this year’s version ended.

Bringing that simulation to life, so to speak, also requires a good deal of human input. Tucked off in a corner of a large room in the Canadian Army Simulation Centre that resembles nothing so much as a high school cafeteria stuffed with computers and map tables, sits the Arianan army. Seated under their national flag, a nasty-looking banner featuring flames and crossed swords, some dressed in uniforms and others in civilian clothes, they are putting 2 CMBG and the other participating units through their paces as the Opposing Forces, or OPFOR.

The civilians are employees or contract workers for Calian, retired military personnel with collectively hundreds of years of experience in armour, infantry and every other branch of the Army. Their other job was to play the role of the manoeuvre units for the exercise – both the OPFOR and the subunits under 2 CMBG’s and the multinational division’s command. As noted, one of the training goals was to conduct a chemical decontamination. “We were fortunate to have such expertise to lend,” said Ray Wlasichuk, a veteran of the Armour Corps and the exercise control main lead. Of the 1,100 people in Unified Resolve, Wlasichuk said, 191 were from Calian. 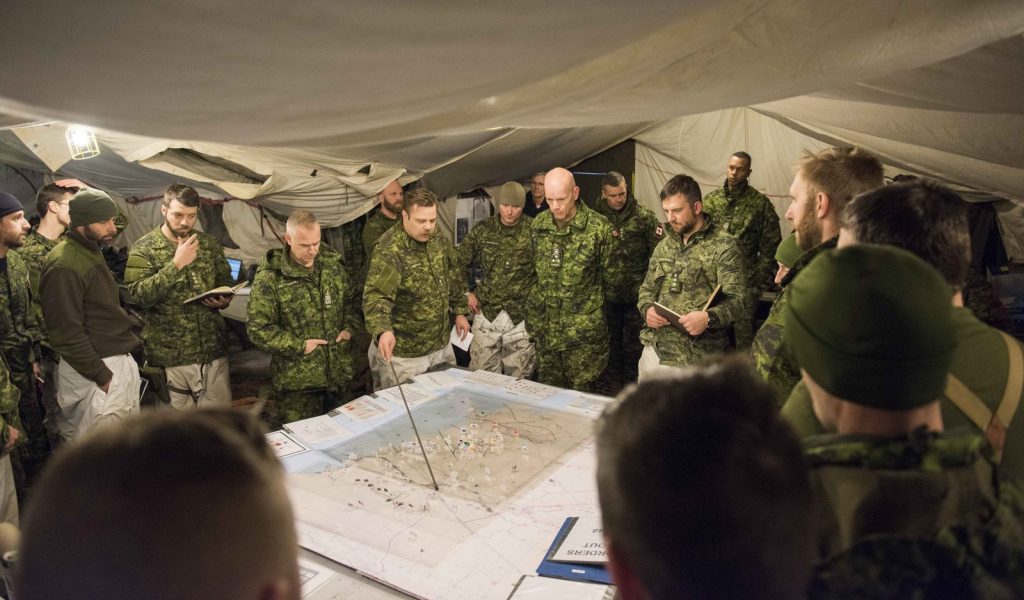 “Nothing at the end of the day can replicate being in the field and being cold, wet and tired.” Adair’s point is well taken. A simulation, even one as elaborate as Unified Resolve, has its limits. It is one thing to state that you are operating in tough conditions, another altogether to be immersed in them, trying to do your job.

To that end, the 400-odd personnel who were part of 2 CMBG’s headquarters spent the six days of the exercise working – and living – in tents, in temperatures that dropped to as low as minus 20 Celsius.

“We wanted to practice command and control on the move,” said Adair. Rather than being parked at a terminal, “in a gymnasium or hangar somewhere,” he worked from a vehicle with a radio. And as with a live operation, the various headquarters components were dispersed over a broad area. If you needed something, “you can’t just go around the corner.” They even used dispatch riders on snowmobiles to deliver orders and maps. Moving everyone into the field had other benefits, observed Adair. “You just get closer with someone if you share a tent.”

And at the end of the day, “we’re Canadian soldiers who need to be able to operate in winter,” he said.

Adair and his staff weren’t aware of what events and actions precisely they were being evaluated on, but, “I can tell you now that we were challenged from the beginning to the end. This is a competitive exercise, and no one wants to lose.”

Combining a committed foe with random, unpredictable injects “forces the staff to be agile, but at the same time you can’t be distracted from the main effort.” Needless to say, they got it right. By day four, the observer controller team, the exercise staff evaluating 2 CMBG’s performance, announced the brigade had hit its goals, but the simulation would continue running for the remaining two days. “I never say no to more training,” said Adair.

In the year that follows as the high readiness brigade, they may or may not find themselves in a real conflict, facing not virtual rocks but real combat. Whatever comes their way, Unified Resolve will have helped them prepare.