The federal government’s 2017 defence policy proposed to increase the Regular Force by 3,500 to 71,500 and the primary Reserve Force by 1,500 to 30,000, and to expand the roles and responsibilities of the Reserves to include combat capabilities such as direct fire, mortar and pioneer platoons.

When you’re the individual training authority for the Canadian Army, numbers like that can send sizeable ripples reverberating across the training system. Colonel John Errington, commander of the Combat Training Centre (CTC) in Gagetown, New Brunswick did the logical thing. He called a meeting.

“I brought all the different schools together for a strategic planning session to make sure we were looking at all the options,” he said. “If we’re recruiting more people to grow the force, it is one thing to get them in the door. But if they don’t get trained, they don’t get to the field force.”

On any given day, several thousand students will be participating in over 130 courses. In a typical year, the centre will oversee 600 different courses. 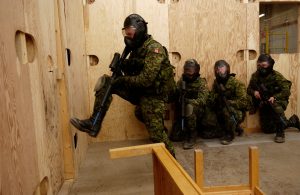 A soldier prepares to kick open a door as the rest of the section prepares to enter. Soldiers from The Royal Winnipeg Rifles and The Queens Own Cameron Highlanders were using the Simunition Range at Canadian Forces Bases Shilo. Photo: Cpl Bill Gomm

An influx of new candidates into the training system, whether Regular or Reserve force, presents a challenge. And Errington wanted contingency plans from all the schools. What resources would be required to increase capacity?

“I have tried to inculcate throughout the CTC that we are going to receive people, no matter what rank or experience or background, and get as many of them qualified and back into the field force to meet the international and domestic demands of the country,” he said.

Securing funding might seem like an obvious first priority. But money is not the biggest hurdle CTC will face.

“It’s the extra instructors and the time,” he said. “We’re built to run a certain number of courses. If you want to add 20 percent, that means I need to add more instructors. And it’s not like I have 20 percent more instructors I can take from somewhere. They are already teaching.”

Additional instructors to augment the schools will have to come from the field force. At a time when the Army is as busy as it has ever been on domestic and international operations, negotiating for more instructors with operational colleagues is “a careful communications balance,” Errington said.

And creating two days of instruction on cyber operations for a signals officers, for example, requires more than finding a capable instructor. The proposed curriculum must first be assessed and approved by CTC before it can be accepted and delivered by the communications and electronics school.

“It takes nourishment to make something grow, and if you want to increase by 5,000, that is going to take an investment in the institution to make that happen,” he said.

Like the rest of the Canadian Armed Forces, the Army has its share of retention challenges, including keeping the very people from which it will look to draw many of its instructors.

It’s also in the process of acquiring and accepting new or modernized vehicle fleets, unmanned systems and digital technologies, all of which must be validated and incorporated into the training curriculum and courseware of the respective schools. Like Jeremy Clarkson of Top Gear, who had no difficulty driving the latest high-performance car but often seemed baffled by the menus of interactive dashboard screens, the ease with which advanced technology is accepted can vary depending on the age of the candidate.

“The plan for how we implement a new capability or technology affects the schools and how we teach,” said Errington. “If it’s just a machine gun for the infantry, that’s easy to do. If it’s a new type of vehicle platform, that can be a little more complex. But when you get into the signals school in Kingston, with the speed at which technology changes, some courses need to be updated almost every six months.”

The government proposal to grow the CAF also comes as the Army begins to purpose-build its Light Forces. Errington, a career light infantry officer, has been closely following the evolution of the Light Forces concept and welcomes “the fact that we are codifying and stating the strategic employability and deployability of a light force that can project and meet strategic intent.”

But he acknowledged that transferring certain capability to the Light Forces will require changes in curriculum and courseware. How the artillery and the light infantry deploy mortars, for example, will be different, meaning new skills will have to be added to infantry training programs.

“We are cross-talking between corps to make sure [we know] which capabilities will be good for a light battalion that can be quickly deployable and employable to achieve the effect, and not as heavy or technical as, for example, what a combat military engineer would do.”

To offset some of the demand for instructors and perhaps move candidates through programs more efficiently, the Army is investing in simulated training systems. Large projects such as the Land Vehicle Crew Training System provide one solution to reduce wear and tear on equipment. 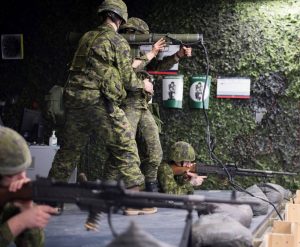 But the Tactics School is also exploring with industry “different technological ways that we can do simulation” on a much smaller scale, Errington said. Among the options currently being trialed within several of the schools are virtual reality goggles. For a vehicle mechanic, for example, VR can provide an immersive environment in which to rehearse a process repeatedly.

CTC is also looking outside the Army for some instruction. Do electricians, for example, necessarily require all their qualification training from a serving member, or could some of that be delivered by the private sector, a university instructor, or a retired member?

That could also involve more cross-training with other services and with allies. Army and Navy divers may have different areas of focus, “but there are some savings by working with our counterparts to get best practices and save some resources overall,” Errington observed, adding that just recently the Navy had inquired about sniper training practices.

“With 600 courses across eight schools, it’s one step at a time as we update the courseware while we also continue to run the courses,” he noted. “We have no choice if we are going to increase capacity. But we need to do it as efficiently as possible without assuming risk in the output.”

One of the more noticeable changes in recent years that will have to accelerate as more candidates entre the training system is a shift in how courses are taught. With a decade or more of experience between instructors and students, instructing the instructors on how to communicate with a new generation of soldiers is often the first step in preparing any course.

“The communication aspect of how to teach the next generation is slightly different,” Errington acknowledged. “We need to be able to answer, ‘why?’ If soldiers understand why they are doing something, then they can think on the battlefield, they can react and adjust. The old days of saying, ‘you do this because I told you to’ doesn’t work today. That’s not to say there’s no discipline, but ranting and raving aren’t really conducive to adult learning.”