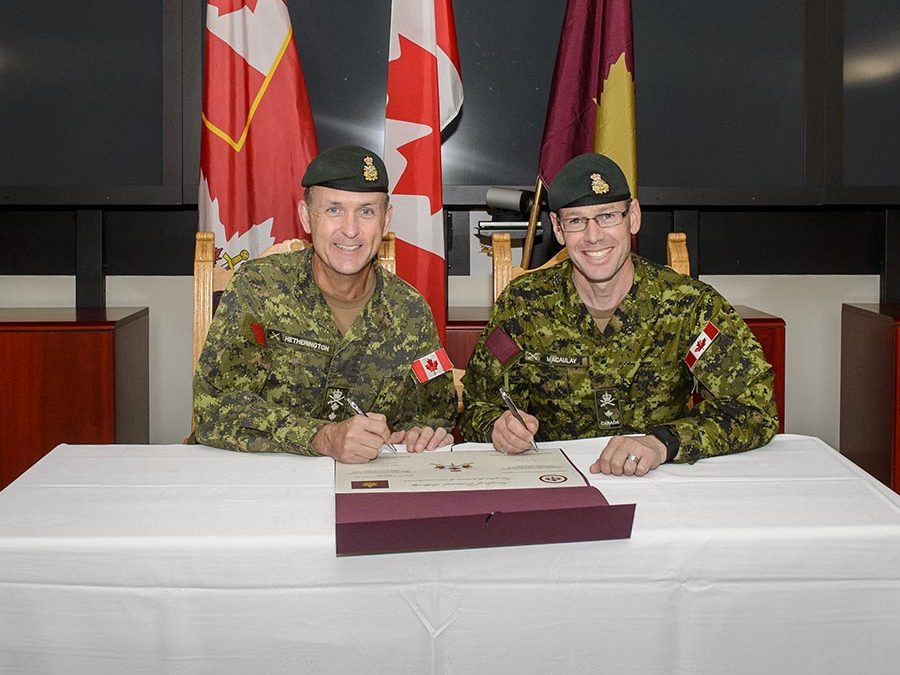 In an historic move, the Canadian Army is transferring command of several key operational enabling capabilities to 5th Canadian Division, headquartered in Halifax.

In early October, command authority for the Canadian Combat Support Brigade (CCSB) was handed over from the Army’s Doctrine and Training Centre (CADTC) to 5th Canadian Division, the first Regular Force brigade to serve under the Atlantic Canada command element.

CCSB is a new brigade established to institutionalize the training and operations of critical functions such as the collection and management of intelligence, surveillance and reconnaissance information; the conduct of information operations intended to have behavioural effects in support of a mission; and operational support to missions, including engineering and artillery.

“I am honoured to be a part of this proud moment in Canadian Army history as the Canadian Combat Support Brigade becomes a part of the 5th Canadian Division and the implementation of this great organization continues to progress,” said Col Marc LaFortune, CCSB’s first commander, during a ceremony in Kingston. “The operational enabling functions that serve with the Canadian Combat Support Brigade provide incredible value to Canadian Armed Forces missions at home and around the world and we look forward to training troops that will support all types of operations.”

“You provide the Canadian Army with a unique capabilities and critical combat support functions that enable operational excellence and deliver key effects to Canadian Armed Forces missions,” said Brigadier-General Derek Macaulay, commander of 5th Canadian Division, in welcoming the brigade. “There is an ever-increasing demand for your capabilities which stems from a recognition that your contribution to success on operations is enormous.”