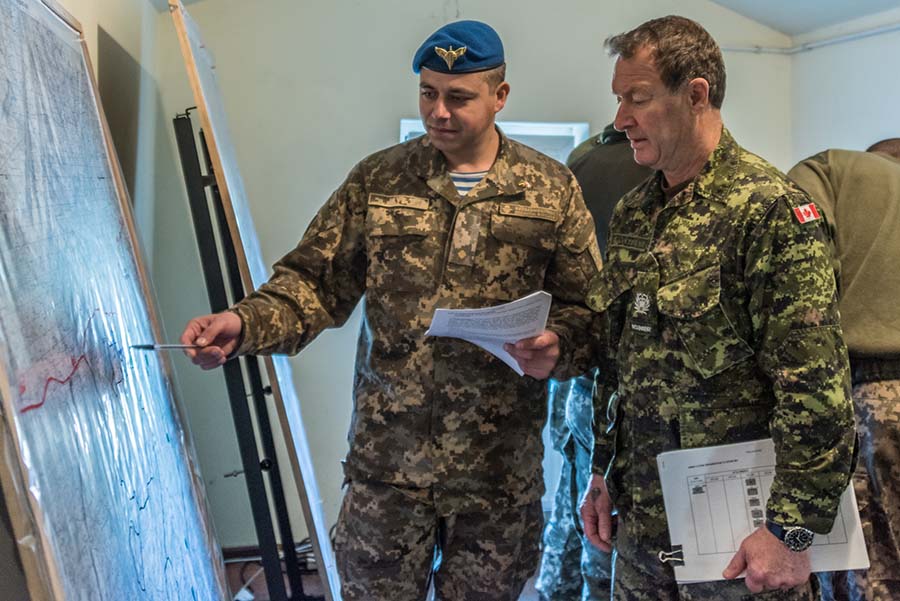 Master Warrant Officer Roch Lanteigne, born and raised in Caraquet, N.B., is a member of the North Shore NB Regiment and one of 14 Canadian soldiers in Dȩba, Poland supporting a multinational army training event, 5-16 November, 2017.

With 42 years of service as an infanteer – much of it as a paratrooper – and deployments across five contingents, MWO Lanteigne has a wealth of knowledge and experience to share, and he is putting it to good use as a mentor in Exercise Maple Arch 2017. 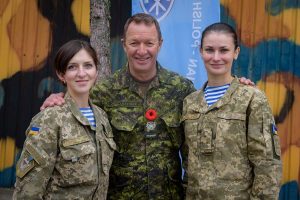 “This is my third Maple Arch and what I notice most is the change in technology we use. The computer training is highly sophisticated, which means we can simulate many situations that requires the training audience to have to analyze and find solutions,” said MWO Lanteigne.

Exercise Maple Arch 2017 trains headquarters staff to employ the Military Decision Training Process, a step-by-step guide which ultimately leads to a decision by a commander on how best to accomplish his/her mission.

“What I’m noticing is a shift towards placing younger officers in key leadership positions. On this exercise we have Ukrainian company and battalion commanders that are in their early thirties in charge of hundreds of soldiers. It’s an incredible responsibility but they are well educated and up to the challenge,” stated MWO Lanteigne.Many of the Ukrainian soldiers who Canadians are advising have recently returned from Anti-Terrorist-Operations in Eastern Ukraine. “They are battle tested and have a wealth of experience. On this exercise there is a healthy exchange of knowledge and both Canadians and Ukrainians are learning from each other.”

A glimpse into the past
With more than four decades in uniform – 35 years as a Regular Force soldier with The Royal 22nd Regiment – and a Reservist with the North Shore NB Regiment since 2011, MWO Lanteigne’s life story could easily fill the pages of a book. As a Master Corporal he met Terry Fox in 1980 while Terry was passing through Petawawa, ON on his Marathon of Hope. Impressed by Terry’s relentless dedication to raise money to find a cure for cancer, MWO Lanteigne promised Terry that in his honour he would do a marathon in full military gear including a sixty-pound pack each year until he reached his fiftieth birthday. True to his word, MWO

Lanteigne ran no less than 25 marathons (sometime two a year) and helped to get his community behind the cause.

Growing up in a military home, MWO Lanteigne followed in his father’s footsteps, who fought in the Canadian Army infantry in World War II. The second youngest of five brothers, MWO Lanteigne was raised like many of that generation, to be self-reliant, work hard and contribute to the community. A highly decorated soldier he is a veteran of Somalia, Cyprus (three tours), Golan Heights, Egypt and combat missions in Afghanistan. He has seen humanity at its best and worst being injured twice.

When it came time to be a father himself, together with his wife, MWO Lanteigne raised his two daughters with the same principles, building them to become strong and independent. He taught them how change a tire on a car, air filters in a home, read a map and compass, and took them hunting. The girls became heavily involved in sports and took up running – something MWO Lanteigne does every single day. Now fully grown, one daughter is a psychologist, the other runs a personal business; they are mothers of their own and lead an active life-style, having run many Ottawa marathons. Last year the pair finally got a better time than MWO Lanteigne and poked fun at him calling him too slow – at 59 years old he did it in approximately 3 hours and 30 minutes – a time most twenty year olds can’t hold a candle too.

The principle of perseverance never abandoned MWO Lanteigne as he pursed his passion to be a paratrooper in the Canadian Army, and now holds the NATO record for most jumps – 1,136 to be exact – under 1,000 feet. So impressive is his achievement, that a drop zone in Valcartier, QC carries his name. No stranger to working with other nations, MWO Lanteigne has earned jump wings from ten countries and served with the elite Canadian Army paratrooper demonstration team, the SkyHawks, in 1997-98 and 2004.

MWO Lanteigne remembers the old army – where public support was low and the pay and benefits so abysmal that it was not uncommon for soldiers to use the food bank to make ends meet. He himself volunteered to be a Canadian Armed Forces test jumper – trialing parachute prototypes, which earned him danger pay that he desperately needed to support his family. That was hard-earned money – he deployed his reserve parachute 27 times while conducting the trials.

With four months shy of his sixtieth birthday and compulsory retirement, MWO Lanteigne is by the army’s definition an old soldier. He was there when in 1989 Sandra Perron, the first female infantry officer, arrived at 22nd Regiment and recalls being proud of the occasion – yet many others did not share his progressive views. Perron recounts her experience in her memoire, Outstanding in the Field, and the isolation she felt. MWO Lanteigne has seen women medics hands covered in blood while bullets were flying and calmly giving life-saving skills to injured soldiers in Afghanistan.

For MWO Lanteigne gender has never played a role in determining the quality of a soldier – it’s the actions of the individual that matter, because as he said, “you never know who is going to save your life.”