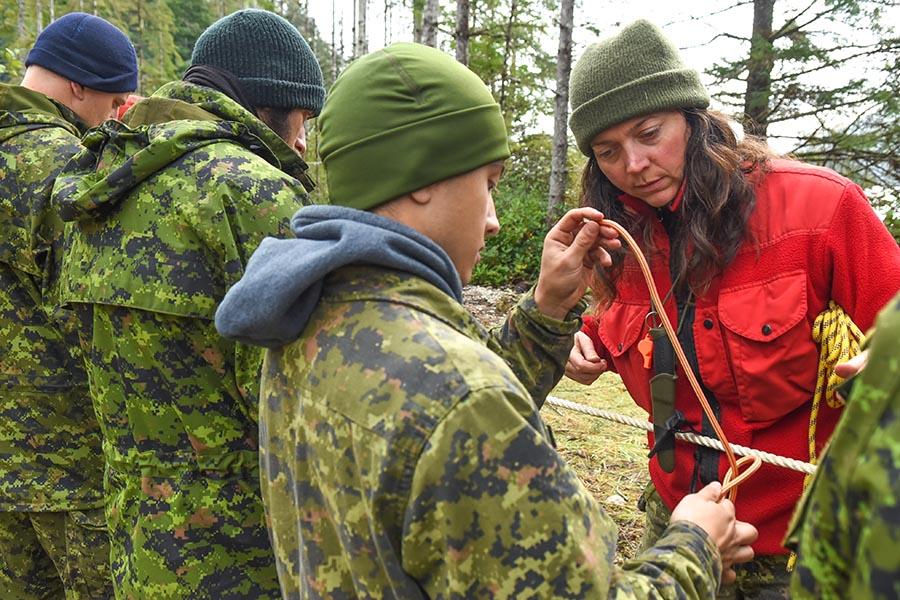 Coal Harbour, British Columbia — For members of 4th Canadian Ranger Patrol Group (4 CRPG), operating in austere environments is second nature. Rangers are the Canadian Armed Forces’ eyes and ears in isolated, northern, and coastal communities and know how to effectively work in a variety of conditions to assist with domestic missions, including search and rescue operations.

4 CRPG members shared those skills in an Enhanced Wilderness Survival Training (EWST) course for soldiers from 3rd Canadian Division in Coal Harbour on the north coast of Vancouver Island in autumn 2019.

The course is delivered in two phases. In the first, the Rangers teach all the practical skills needed to survive in the wilderness alone. This includes building shelters, starting fires, making and using tools such as axes and saws, foraging and hunting for food, finding water sources and desalination of water, and the psychology of wilderness survival.

“With this course, the Rangers are stressing that it is one thing to survive, but it is another to thrive in the wilderness,” explained Warrant Officer James Vogl, 4 CRPG’s Alberta/Saskatchewan Company Sergeant Major. “We are focusing on the more advanced practices of bushcraft skills and bush living.”

After learning the practical knowledge, each candidate is dropped off in an isolated spot and required to spend three nights alone with minimal supplies. In the field they have the clothes on their backs and are issued a number of tools – including an axe and sharpening stone – as well as shotguns, and a radio and satellite phone.

Before going out to the field they are weaned off of food and introduced to wild edibles and game. Once out in the field, they have one wellness check a day so a medic and a Ranger can make sure they are healthy and able to continue. While in the field, participants are required to perform various tasks, including building a shelter, starting a fire, and securing a water source.

“This course isn’t about just suffering through like they may on a Basic Wilderness Survival course. This is about being out in the field and being more effective and sustainable with what they do have,” added WO Vogl. 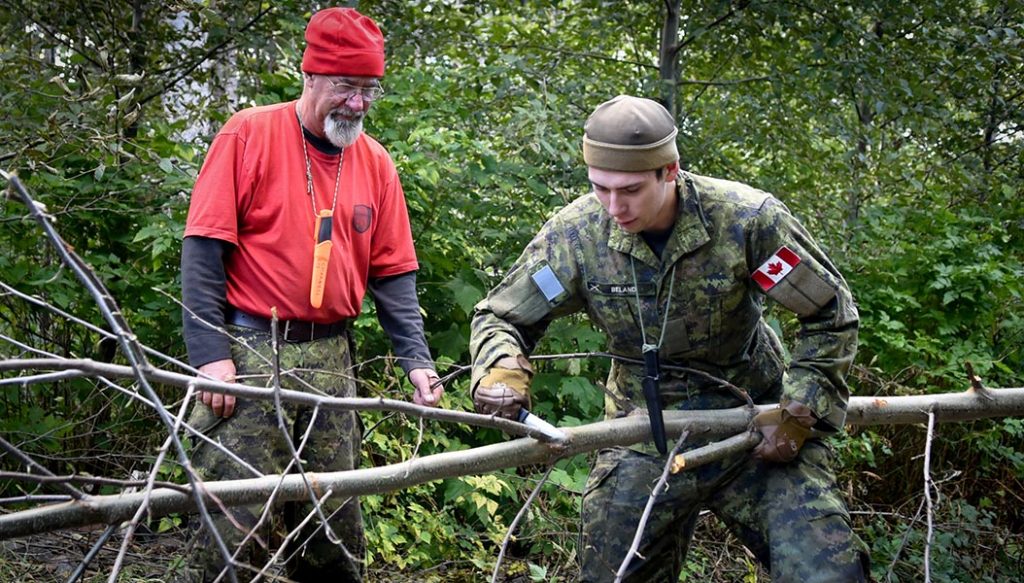 Canadian Ranger Sergeant Emily Coombs, Patrol Commander for the Ucluelet Canadian Ranger Patrol, was one of the instructors on this year’s EWST course, but it wasn’t long ago that she was a student herself.

“Four years ago, when the first EWST course was held I was a student,” she recalled. “When I first arrived on course, I didn’t know I was going out to the field by myself, so I had to get over that mentally. During the instruction I was focused on trying to absorb as much knowledge as possible.”

“In the field for me the nights were the hardest part,” she added. “I would wake up every couple of hours to fix my fire. Without eating you feel the effects on your body. I got through about two days before I hit my low point where for the entire morning all I did was sit and poke at my fire and hope it didn’t go out. The biggest thing for me was to stay positive and keep going. I wasn’t going to just sit under a tree wait for someone to arrive.”

Sgt Coombs said her students now have important lessons to pass on to their colleagues.

“The hope is that these soldiers will go back to their home units and pass on the knowledge they have gained from the course and help their peers with learning these wilderness skills,” she said. “Should they ever find themselves in the unique situation of being alone in the woods they have the basic knowledge and skills to get them through the night.”