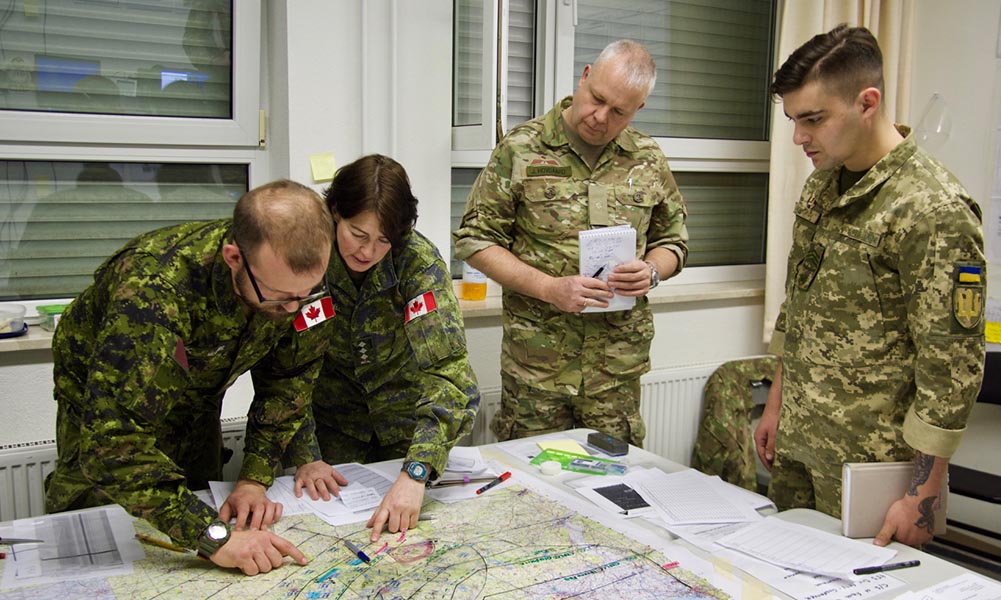 In the spirit of multi-national interoperability and joint readiness, a Canadian contingent participated in Exercise DYNAMIC FRONT 2019 (Ex DF19) alongside soldiers from 27 Allied nations from March 1-9.

Their role was to plan, synchronize, coordinate, and direct fire from six nations with additional surveillance and target acquisition and air defence assets. Throughout the exercise, these joint fire activities were conducted under the banner of Artillery Systems Cooperation Activities (ASCA), a multi-national operating standard that Canada has recently adopted.

“The Canadian Army’s contribution to Ex DF19 helped refine our role as an integral member of the ASCA network, while strengthening our relationships with gunners serving with our Allied nations. Interoperability and joint readiness is all about getting to know your Allies, ensuring you can speak same language on the battlefield in order to execute operational effects when it truly counts,” said Lieutenant Colonel Paul Williams, Commanding Officer, 4 Regt (GS).

“I believe that we achieved this with our United States Army counterparts and the multi-national representatives that served with the 453rd Multinational Artillery Division on Exercise DYNAMIC FRONT.”

The professional development and relationship building that took place during this exercise was also well-received by Canada’s international partners.

“Our training with the Canadian Army on Ex DF19 was focused on developing standards for Artillery Systems Cooperating Activities which is the common language for Division Artillery organizations across the NATO federated mission network,” said Colonel Patrick Macklin, Commanding Officer of the 53rd DLD.

“This training builds joint readiness by enabling staffs to network infrastructure and doctrine with this common language. Interoperability is a fundamental condition of how our armies plan to fight tonight, tomorrow, and in the future,” he said.

Col Macklin noted, “4 Regt (GS) brought a group of professional soldiers who are passionate about training and take pride in their work. I believe that together, we made progress on ASCA development that will enhance artillery training and operations in both of our nations.”

X Battery of 1st Regiment, Royal Canadian Horse Artillery, currently serving as part of eFP BG Latvia, participated in the exercise by conducting live-fire training missions from their forward deployed location. Throughout the exercise, they served with a Division Artillery organization comprised of soldiers from four nations: the United States, Czech Republic, Latvia and Spain. The Canadian Army contributed artillery assets at the operational and tactical levels and worked closely with multi-national partners to enable learning at all levels.

“As Canadian gunners, we are used to operating in very cold temperatures,” said Lieutenant Tyler Gilchrist of eFP BG Latvia.

“This has given us expertise in operating all of our equipment in a winter environment. Our M777 Howitzers are essentially identical to those used by the American Marines also taking part. They, however, do not have the same experience operating the guns in a cold environment and therefore have experienced some technical difficulties. As a result, a professional development session is being organized to allow our Canadian gunners to pass on some of their cold weather knowledge to their Marine counterparts.”

In addition to passing on tactical knowledge that is inherent to being Canadian, Canadian soldiers in Latvia also shared lessons with their international counterparts that go beyond gunnery practices.

“It’s really a great experience to have the opportunity to work with other nations,” said Captain Genevieve Lachance, eFP BG Latvia. “We can learn more about their artillery capacity but also about how their operations work. Even if their basic shooting discipline remains the same, each nation has its own way of operating its gun line and its command position. When speaking with them, we realize that the challenges we encounter during a firing mission are much the same.”

Capt Lachance continued, “We had the opportunity to work closely with the Czechs which allowed us to create beautiful relationships and help each other through the various exercises / artillery operations, especially with regards to logistics. We were able to support them with replenishment and put them through a structured replenishment process, which they were not very used to,”

Serving as representatives of the Canadian Army and ambassadors for Canada, the Canadian gunners who participated in Ex DF 19 left the exercise with some lessons learned and some new friendships which characterized a successful mission for everyone involved.