Blackjack: Army hits 21 with new ace in the sky 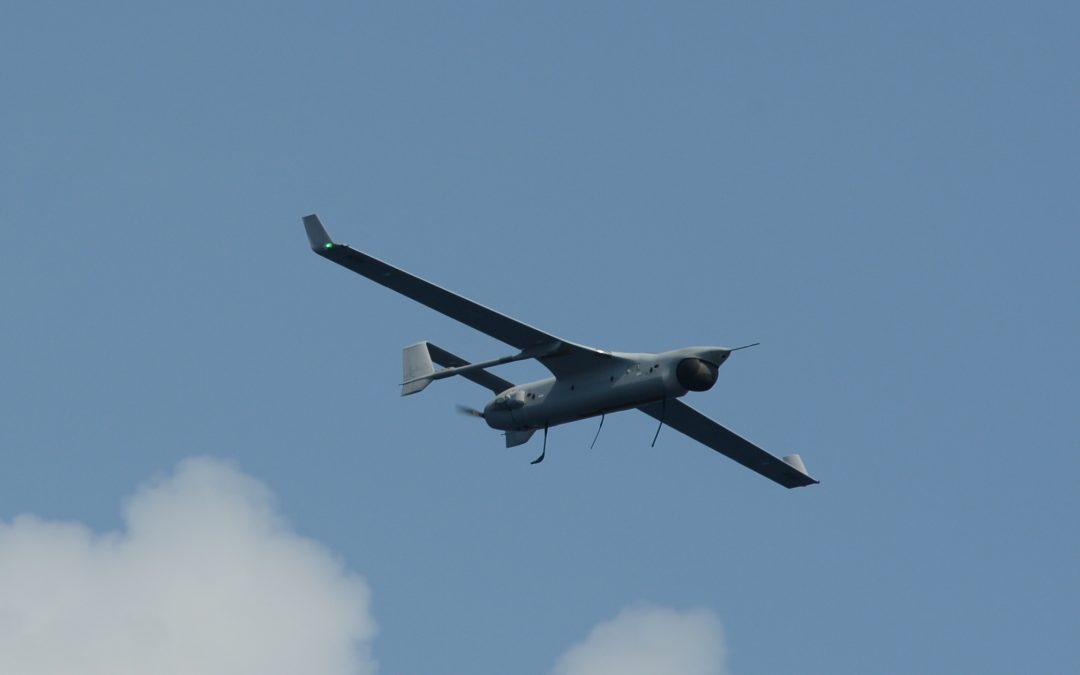 As capabilities go, unmanned aircraft systems (UAS) are old hat to the Canadian Army. For over two decades now, soldiers with the 4th Artillery Regiment (General Support) and other artillery and armour units have trialed and experimented with remotely piloted aircraft, often to great effect in exercises and operations.

Those UAS, however, were usually acquired in test or lease arrangements, and frequently operated in partnership with private industry. The arrival this fall of the Insitu RQ-21A Blackjack, soon to be renamed the CU172 Blackjack, will mark the first time the Army has fully owned and operated a small UAS.

“The [mini] CU173 Raven B is all we have in the Army at the moment and it is being used beyond its intended purpose,” said Captain Matthew Shoniker, a field artillery officer who, for the past three years, has led the family of unmanned aircraft systems project, part of a larger Land Force Intelligence Surveillance Target Acquisition and Reconnaissance (LFISTAR) program.

Along with a medium range radar, the ISTAR project has sought to deliver a family of unmanned aircraft systems to provide brigade, company and platoon commanders with more eyes on targets and terrain for both domestic and international operations.

In the summer of 2014, the Army received its first member of the family, the Raven B, a hand-launched mini UAS built by AeroVironment and provided under contract by MacDonald, Dettwiler and Associates (MDA). Employed by the 4th Artillery’s surveillance and target acquisition batteries and by armoured reconnaissance squadrons, the Raven B offers company and squadron commanders “an integral non-line-of-sight sensor to improve their situational awareness,” Shoniker said at the time.

But as the only UAS asset, the mini aircraft has been in heavy demand from brigades and battalions. “It’s being used for much more than [company or squadron requirements] in training and on operations,” he said in a recent interview.

The RQ-21A Blackjack system, valued at US$14.1 million, includes five aircraft, two ground control stations, and a launch and recovery system, and will give the brigade its first owned and operated over-the-horizon capability. The system, the first of two the Army intends to acquire, will be configured to land force specifications this fall and delivered to the 4th Artillery Regiment’s UAS troops by December. 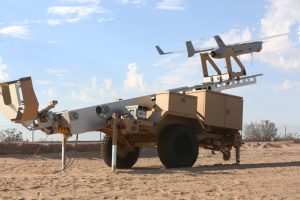 The Canadian Armed Forces (CAF) has been evaluating UAS capabilities since the 1960s when Canadair led the design and testing of the CL89 Midge. But the first UAS to be acquired and operationally deployed was not until 2003 with the Sagem CU161 Sperwer in Afghanistan.

The Air Force has since been assessing and operating medium altitude, long endurance aircraft as part of the Joint Unmanned Surveillance Target Acquisition System (JUSTAS) project. The CU170 Heron, an Israel Aerospace Industries intelligence, surveillance and reconnaissance (ISR) drone leased for two years in 2009 through MDA, was introduced as the Sperwer was phased out.

Smaller and so-called mini and micro capabilities, however, have remained the purview of the Army. Between 2008 and 2014, the Army leased the Insitu CU165 ScanEagle, a smaller sibling to the Blackjack, with operational support from ING Engineering (now ING Robotic Aviation) of Ottawa. It also briefly deployed the Skylark‑I, a hand-launched small UAS delivered by Thales Canada and Elbit Systems for tactical surveillance and reconnaissance, and the Maveric, a foldable one-kilogram mini UAS from Prioria Robotics. The ScanEagle, however, did most of the heavy lifting, logging over 30,000 flight hours in Afghanistan to meet the constant demand of mission commanders for ISR data.

In the Blackjack, the Army has acquired a proven ISTAR system, well suited for dull, dirty, and dangerous duties that previously might have tied up manned platforms, said Art Crowe, Insitu’s business development executive for U.S. Marine Corps programs. The aircraft has a 6,000-metre operating ceiling, a normal cruise speed of 60 knots – though it has achieved 90 – and a flight time that has exceeded 18 hours.

Like the ScanEagle, which was leased by the Marines in 2006 for Operation Enduring Freedom, the Blackjack was developed in partnership with the Marine Corps and U.S. Navy to meet a range of tactical multi-mission requirements. The aircraft is based on a commercial platform, the Integrator, which was trialed and validated in Afghanistan in 2014. The Blackjack reached initial operating capability (IOC) in 2016, and has since deployed to Iraq. “[We have] well over a million hours between the ScanEagle, Integrator and Blackjack platforms,” said Crowe.

The Canadian Army acquired the CU172 under a foreign military sale and will be the first non-U.S. military customer to operate the system.

While the Blackjack is limited to a payload of 17 kilograms, the modular design allows for the rapid change of sensor systems. The standard sensor package includes an electro-optical imager, a mid-wave infrared imager, a laser rangefinder, an infrared marker, and a communications relay, with 350 watts of dedicated on-board power. But both the Marines and Insitu have tested around 100 different payloads, Crowe said.

“It is a very easily configured interface,” he said. “Most manufacturers’ systems have been able to interface with this system.”

The Army will start with the baseline package, Shoniker said, but “we are absolutely looking at other payloads.” One example that has caught his eye is video detection and ranging (ViDAR), a sensor for search and rescue that resolves the soda straw effect by providing a wide area scan to identify distinct shapes or inconsistencies in the terrain for closer inspection.

The Blackjack takes off from a pneumatic launcher, the Mark 4 developed by Hood Technology Mechanical, and is recovered via a skyhook, both of which are towed. But the robust system does not require a landing pad, a key requirement for a dispersed force.

“It’s got a pretty big footprint,” Shoniker acknowledged, noting the ground control station (GCS), maintenance bay and miscellaneous components each require separate sea containers. “But one of our biggest requirements is runway independence.”

The control station features Insitu’s open-mission management command and control software and requires a single aircraft and payload operator. The open mission architecture could allow the Army to integrate and operate other unmanned ground and aerial systems from the same station.

“As long as the plane and the ground control software are STANAG 45-86 compliant, they will be able to talk to each other. And I think more companies are moving toward that,” said Shoniker. “We should be able to go from system to system using the same ground control station.”

Crowe noted that the processing, exploitation and dissemination (PED) software is built into the GCS and integrated with the mission management program, meaning “not only are you looking at real-time, full-motion video, but [you have] the ability to evaluate and manipulate that data.”

Insitu has trialed the ScanEagle with the Royal Canadian Navy and continues to market the Blackjack as a potential solution to its UAS requirements. While interoperability with the U.S. Navy is part of the pitch, so is enhanced land-sea integration.

“In an ideal world, we all would have gotten the Blackjack because it is built for a littoral environment,” said Shoniker. “That is the concept of operations for this: to launch it off a ship, and then hand off to somebody in a ground vehicle to use it. Whatever system the RCN get, both need to be compatible so we are able to work together.”

Each aircraft can also serve as a data relay, extending the operating range of the entire system, especially if one of the ground stations is mobile. “We’re not going for a mobile GCS right off the bat, but that is something we’re looking at for the future,” Shoniker acknowledged. 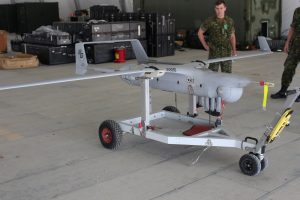 Though the CU172 Blackjack is an Army asset, it must first be confirmed airworthy by the Air Force, a process that includes accrediting the 4th Artillery Regiment as UAS pilots and an air maintenance organization.

Both electronic-optronic technicians and designated vehicle technicians spent the summer on the Air Force’s common core course, the initial training program for every aircraft technician, at the Canadian Forces School of Aerospace Technology and Engineering (CFSATE) in Borden. Shoniker noted that a more specific course would eventually be refined for UAS maintainers.

And an initial cadre of sergeants with ScanEagle experience began a 10-week operator training program in September at Insitu’s facility in Bingen, Washington. They will form the first core of instructors for the regiment and the artillery school.

While the Army is well acquainted with unmanned systems, the family of UAS project represents a significant change in terms of ownership. The program is expected to achieve IOC around 2019 once the last pieces of the medium range radar and UAS systems are delivered and trained, but the Army is already looking ahead to micro aircraft – it will conduct a buy-and-try with a Black Hornet Nano from Prox Dynamics to understand its utility with light infantry platoons – and to eventual upgrades and expansion of the existing systems through UAS recapitalization and ISR modernization projects. That could include quadcopters, which can carry a larger payload but lack the endurance of a fixed-wing aircraft.

Despite three years of talking to leading-edge companies and attending countless conferences, Shoniker has yet to become too enamoured with unmanned technology – “I don’t own one,” he admitted. But he believes we might only be seeing the tip of their capability. “Automation, the amount that is going to take over is…,” he finished with a wide gesture with his arms.