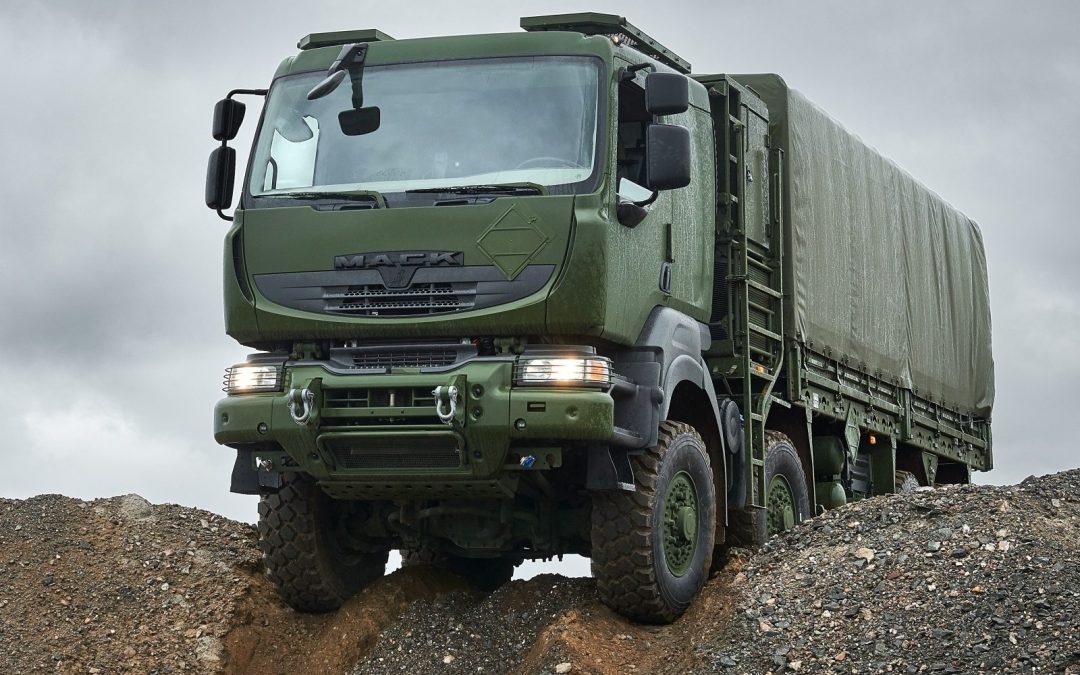 Two of the 9.5-tonne capacity four-axle SMPs, from Pennsylvania-based Mack Defense, were unveiled in September at Canadian Forces Base Petawawa, where senior officers and the troopers who will operate and maintain the vehicles were joined by Defence Minister Harjit Sajjan and Mack Defense president David Hartzell.

“I was really happy to hear one of the corporals say this is literally the best vehicle in the Canadian Armed Forces fleet,” Sajjan said afterward, explaining to Canadian Army Today that the high praise from the trooper was clearly warranted.

“This is light-years ahead,” he agreed, recalling previous generations of trucks, dating to when he was in basic training. 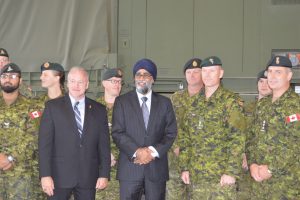 Sajjan repeated the government’s mantra about giving the Canadian Armed Forces what they need for missions at home and abroad. “When our members know that they’re being looked after properly … you know that they’re going to have the confidence to be able to do their job even better.” And easier – no more grinding the gears because the new trucks have automatic transmissions, an accelerating trend in civilian trucking.

The procurement from Mack began in July 2015 when the government awarded contracts worth a total of $834 million for the new trucks, trailers, armoured protection systems and in-service support. Petawawa was the second base to take delivery, Edmonton being the first. The total truck order is 1,587 and once the last is delivered in 2020, more than 100 units across Canada will be assigned at least one and as many as 70, the number tailored to individual mission requirements.

There are five variants: a basic troop transport comprising 38 percent of the fleet; a load-handler capable of loading, transporting and unloading the maximum capacity (47 percent of the fleet); a material-handler equipped with a rear-mounted crane (three percent); a mobile repair team vehicle designed to carry a workshop (10 percent); and a gun tractor (two percent.)

The SMPs are the fourth element of the Army’s Medium Support Vehicle System (MSVS) project, the first part being a completed buy of 1,300 smaller off-the-shelf commercial trucks. Navistar Defense supplied the rolling stock to DEW Engineering in Ottawa. The second and third elements, also completed, were six “shelter” variants, essentially ISO container-based workspaces. Four were manufactured and kitted out by DEW as the prime contractor; the two others were subcontracted to Weatherhaven in Vancouver. The fifth phase involves ongoing minor infrastructure upgrades at various bases.

That the project is fully-funded – as set out in the Liberals’ April 2017 defence policy – has smoothed its progress. “Defence policy is not just about having a laundry list of projects; there is a plan in place,” Sajjan said. “The cost of the entire defence policy has been carved out of the fiscal framework, which means I don’t have to ask for money for any projects …This project has gone very well. I want to give a shout-out directly to … Mack as well.”

As with most major military equipment buys, the SMP truck deal is subject to the government’s industrial and technological benefits (ITB) policy, which requires that for each dollar spent on the procurement, the contractor must put a dollar back into the Canadian economy.

Hartzell said Mack Defense is easily on track. “At the end of 2018, we expect to have credit for more than $600 million in … offsets and, by the end of the program, we will far exceed the value of the program,” he told Canadian Army Today. “We’re pretty proud of that.” 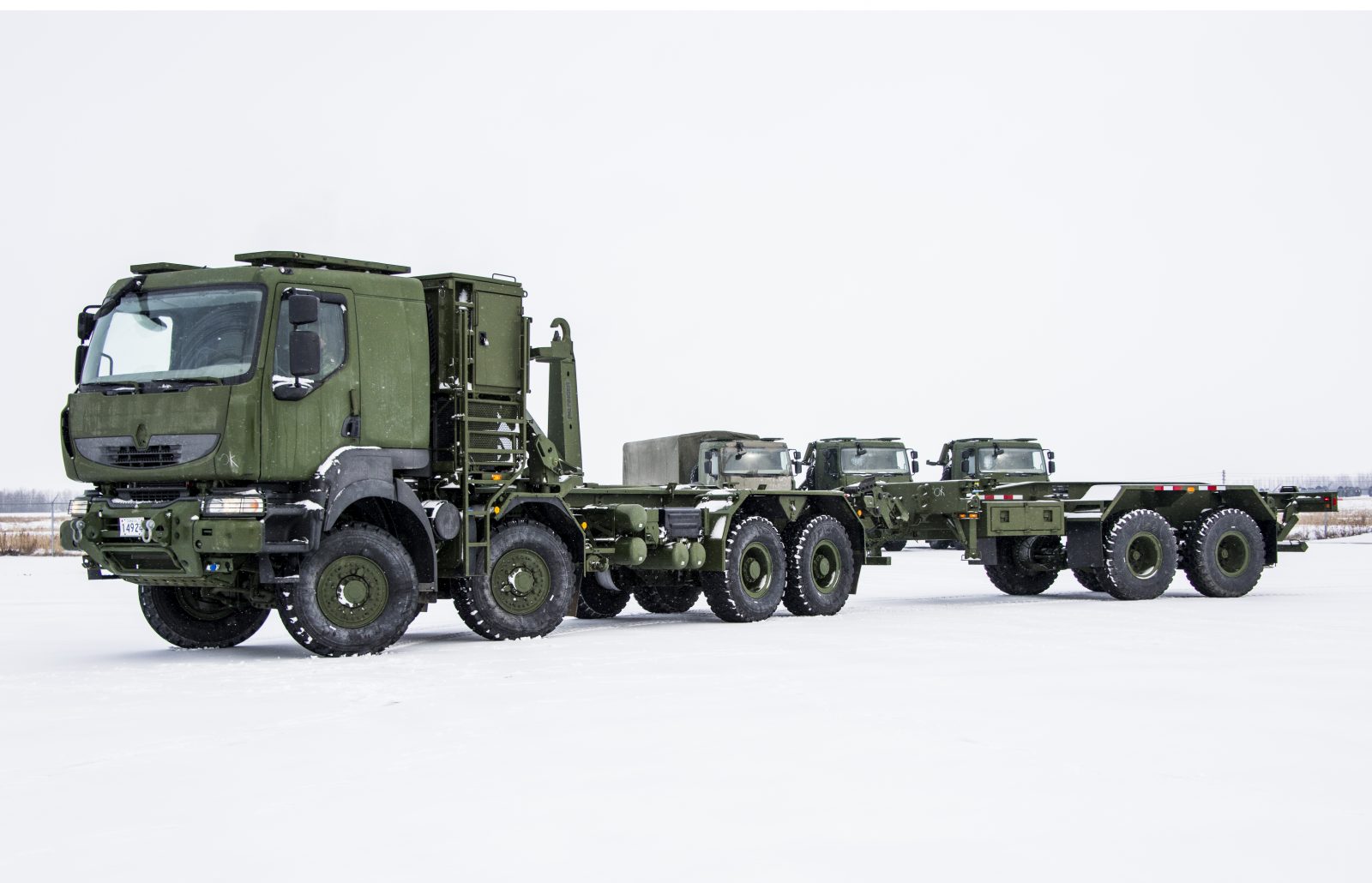 Lieutenant-Colonel Patrick Heebner, commanding officer at the 4th Canadian Division Support Group in Petawawa, expects lifecycle management to be much easier than it was with the previous generation of trucks. “There were more than 100 variants of those and now we’ll have only five, which means less spares, less personnel managing systems. Easier and cheaper to maintain: that’s the concept behind it.”

He said the sheer volume of the vehicles and their modularity are welcome advances. “These are TEU 20-foot equivalents (Twenty-foot Equivalent Units are used to determine container ship capacity) and you can swap or play those out as you need. You can do office, command posts, turn it into a medical unit or a field kitchen. These are capabilities … we didn’t have in the past.”

Asked whether that means more rapid deployment, he agreed that should at least be the case when the Army is tasked domestically, as in helping civil authorities to deal with natural disasters. Transporting the older medium logistics trucks, in service since the 1980s, meant the vehicle and the container had to be shipped as a unit. “That was expensive and complex. Now we can separate them and send those capabilities to different locations at different times, and link up later, which is a good capability.”

Shipping overseas usually is done by ship, a cheaper option, but when time is of the essence, the Royal Canadian Air Force’s fleet of Boeing CC-177 Globemaster IIIs, flown by 429 Transport Squadron out of Trenton, Ont., would come into play.

Colonel François Lavoie, the MSVS project manager, highlighted the armoured cab option. “It’s a full 360 protection – ballistic and blast – so it brings in added flexibility to swap vehicles if anything should happen to the remainder of the vehicle.” He said it takes three people, a total of 30 person-hours, to change out the conventional “soft” cab for an armoured one.

Hartzell pointed out that every SMP, built at the rate of four a day on a dedicated line parallel to Mack’s commercial line in Allentown, Pa., which can push out 100 vehicles a day, is delivered with a commercial cab. The 160 armoured options, mostly steel and composites, were a separate deliverable by Dumur.

“The requirement was that it had to be swapped in 48 person-hours or less. When they have a vehicle that’s going to be going into an area of threat, they’ll basically pull the commercial cab off and put the significantly heavier armoured cab on. All the interfaces align; the mounts change with the cab itself, but the suspension and the rest of the vehicle is the same.”