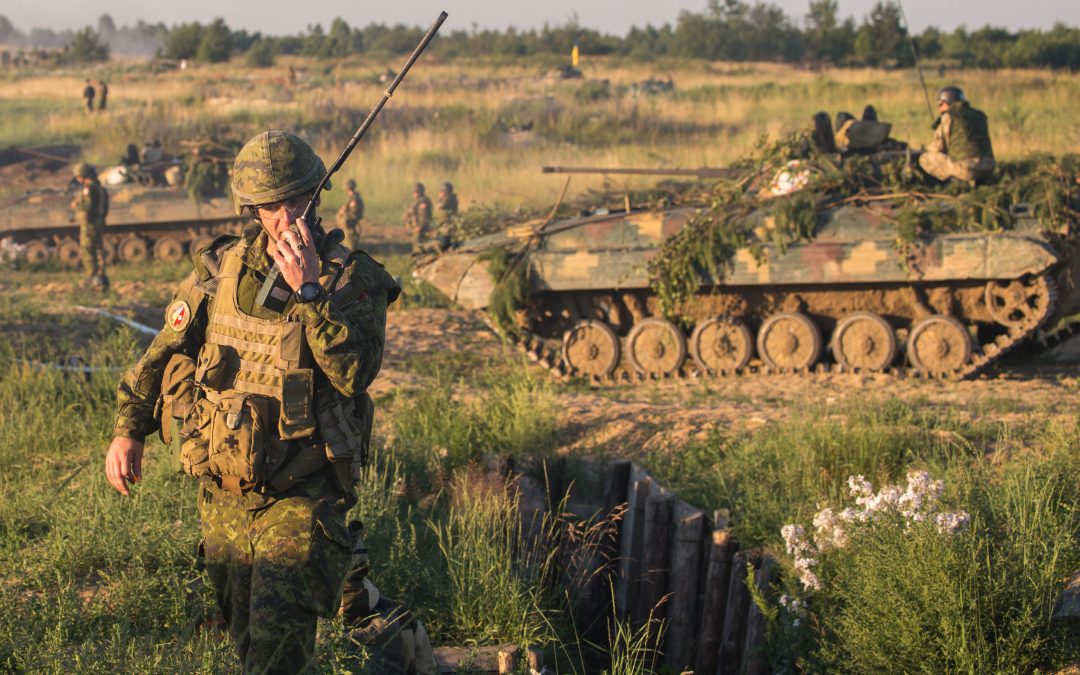 The deployment of Canadian Armed Forces (CAF) to Ukraine in 2014 was intended to bolster NATO’s assurance measures against Russia’s invasion of Crimea and its ongoing support for the conflict in the Donbas region.

However, the training mission is not only helping the professional development and modernization of the Armed Forces of Ukraine as it strives to blunt a threat from the east. It’s also supporting Ukraine as it looks west toward military compatibility with NATO by 2020.

Equally important, Operation Unifier has provided the Canadian Army with what the commander of Joint Task Force-Ukraine (JTFU) calls a “battle lab for hybrid warfare” against which to gauge the effectiveness of its standard operating procedures (SOPs).

Well before Lieutenant-Colonel Kris Reeves and a team of about 200 personnel, many from the 3rd Battalion, The Royal Canadian Regiment of 2 Canadian Mechanized Brigade Group, departed for the edges of the old Soviet Empire, they conducted a mission analysis, pouring over the history and culture of Ukraine and the causes of the recent conflict. They understood that memory runs deep, and any effort to shape the future direction of the nation’s military would be complex and riddled by politics.

“Trying to help another nation’s army get better, especially when there is such a divide between start points, is a lot more than just teaching somebody how to fire a rifle,” Reeves, the JTFU commander, said in a recent interview from Ukraine. “We have to be respectful and mindful of the goals. And those goals need to be set by Ukraine.” 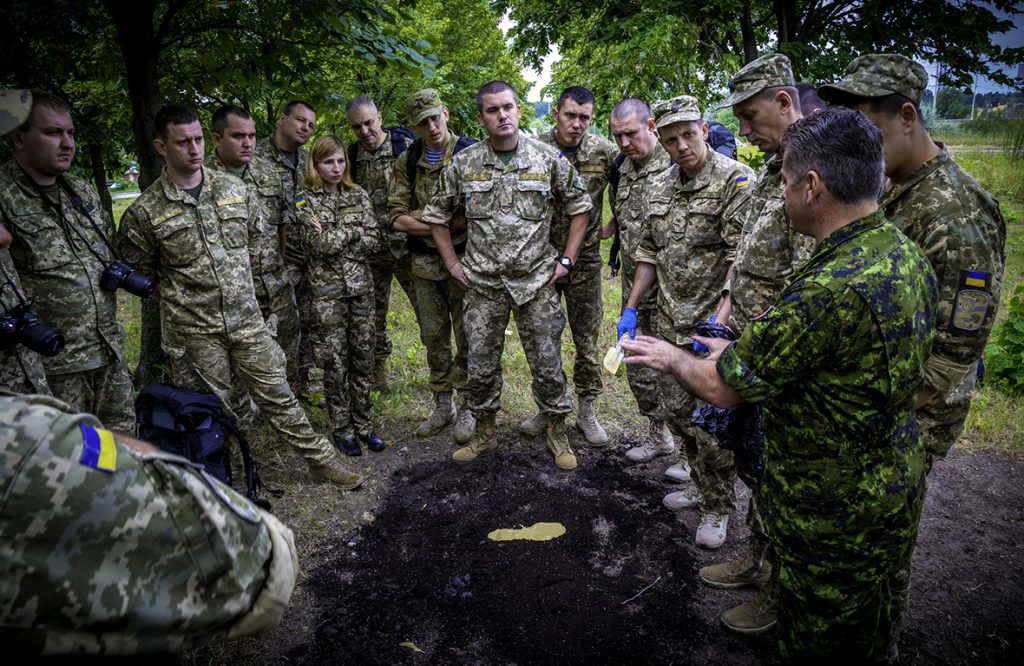 Officially known as security force capacity building, the mandate for Op Unifier – which currently runs until the end of March 2019 – has recently transitioned from a direct skills and tactics training mission to a broader one of mentoring both individual soldiers and military institution. With a new direction, the task force has also surged by 48 additional Army members from the infantry, artillery, armored and logistical corps.

The multinational mission includes representation from the United States, Britain, Lithuania and Poland and began with a focus on individual training – weapons and marksmanship, movement, explosive threat recognition, communications, and command and control. The evolution to mentoring includes strengthening the decision-making power of junior leaders and non-commissioned officers (NCOs) to reshape a decades old post-Soviet model based on rigid Division and Corps control.

The Canadian emphasis on the brigade group and the disaggregation of lower elements for potentially long duration “was alien to them,” said Reeves. “The idea that you could cut and splice and task organize your elements, even down to combat team level like we do, does not make sense to them yet. It is getting there.”

Likewise, the sustainment and medical systems are constructed for a fight very different from typical NATO operations. “It is hard for them to resupply many small elements,” Reeves noted. “The medical system, they do from point of injury right back to the hospital, one stop,” rather than the Canadian approach of multiple triage points at the platoon, company and battalion level.

Learning to become more flexible in all aspects of manoeuvre and support is a core focus of the Yavoriv Combat Training Center, a training lab that allows the Armed Forces of Ukraine to experiment as they adopt NATO approaches to combat, explained Major Pat Newman, responsible for tactical team training.

“Ukrainians don’t have that delegation to the point of discomfort. Where we are comfortable with that and will give direction in such a manner to achieve that, they are not there yet. We’re trying to help them get that delegation down, that authority, knowledge and responsibility to achieve such missions…They are very smart individuals, it is just that they are changing a system a little bit at a time and it is a big system to change,” he said.

“The overall impact of this place on the Armed Forces of Ukraine is growing and it is our opportunity to have more influence helping them think, shoot, move and communicate to become that much more of a professional army and that much closer to NATO compatibility.”

To achieve that, the international partners have changed how the Ukrainians approach exercises. “The post-Soviet model is big live fire training where there is lots of rounds going down range,” Reeves noted. “It is very exciting, but it is very scripted. We are teaching them a way to approach training that is what we call force-on-force: you use a thinking, live enemy, the scenario is instrumented and simulated, and you focus on the integration of all your assets and on decision-making.

“As they add more tanks, more combat vehicles, more soldiers and equipment, all of that money and their strategy goes in through this NATO approach to training and comes out as a much stronger force that is able to withstand Russian aggression in the East. It took about two years to get there but we are very much into getting their institutions to a stronger, more robust western focused mindset.”

While tactics remain a part of the training, the transition to mentoring means a more reciprocal relationship as young officers and NCOs seek out information from their Canadian counterparts. “At my level, they want to get back to decision making and flexibility,” said Reeves. “They always ask, how do you get the trust from the generals to allow your majors and sergeants to have so much flexibility? And I tell them it starts with being allowed to think for yourself.”

For officers and NCOs alike, one of the fundamental challenges is resolving basic issues like pay, housing, and resources to support military families. All of those affect the ability to post people, and the training centre desperately needs more instructors.

“They are getting paid better, and the president is committed to paying the armed forces well. However, housing is in short supply on all their bases and they don’t have the benefits that Canada enjoys, like paid moves,” Reeves observed. “It is difficult to move their people around the country. And it is also difficult to retain them.” 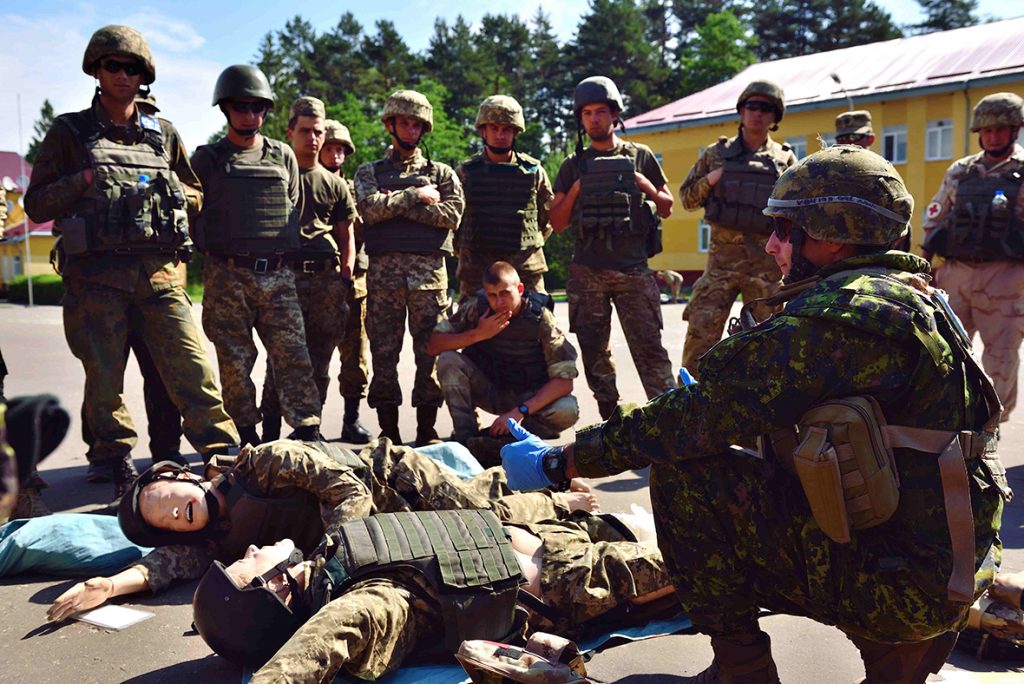 While not officially a diplomat, Reeves admitted a large part of his responsibility is diplomatic in nature. The conversation on the ground might be about building a combat training centre, but he frequently works through the Canadian ambassador to raise reform issues like NCO development, soldier pay, housing – “the kind of things I never thought I would be getting involved with.”

“We really embrace that warrior-diplomat role. And it is not just me. We have master corporals who have spent time in Lviv, sergeants who have spent time in Kyiv and other places doing the same thing. They brief Ukrainian three-star generals on the good work of their Ukrainian counterparts. At first the Ukrainians don’t believe it, but we try to put to good use the credibility the Canadian uniform brings to any conversation.”

Reeves has extended that credibility well beyond the confines of the military. As part of the pre-mission analysis, his team recognized they could not operate solely in a bubble on a base. To mentor Ukrainians, they needed to “live” the culture.

“Our outreach needs to connect us with the local population,” he said. “It has to demonstrate our commitment, but it also has to be meaningful for our own troops.”

Through Padre Capt Humberto Lopes and others in the command team, members of the Joint Task Force have acquired boots for young children, worked with young adults, hosted a camp for orphans and children in foster care, and participated in Commonwealth Remembrance Day and Ukraine’s Day of Defender ceremonies.

“[These] have been opportunities to connect, to learn, and to show who we are as Canadians,” Lopes said. “Our soldiers come back really empowered. We know that we are blessed in our country and you want to show that.”

In preparing Ukrainian forces for compatibility with NATO operations, the Joint Task Force has been exposed to the whole spectrum of conflict, an environment Reeves called a battle laboratory for hybrid warfare.

In an interview with a Ukrainian business magazine, he said battlefield encounters are providing the Canadian Army a foretaste of the tactics and capabilities that will shape future conflicts.

“We’ve seen the implications of soldiers having smartphones on the frontlines, which is not something that had previously been a major issue. We have become aware of the enemy’s ability to send text messages to individual soldiers and to engage in other forms of psychological warfare. Drones have been jammed as soon as they are launched, while communications systems have served to attract accurate enemy artillery fire.” 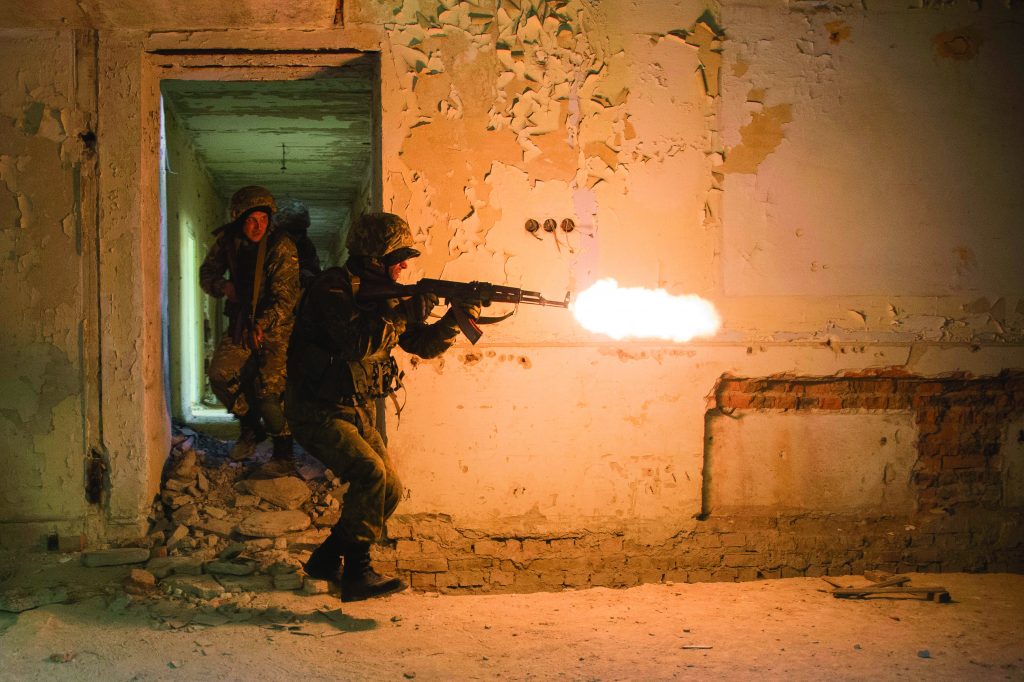 A Ukrainian soldier engages a target as part of the urban warfare training provide by the Canadian military. Photo: DND

Information operations are not new, but the tools and how they are used are. The speed and power of information warfare has been eye-opening, he said. “We have to steel the minds of our people. That’s not to brainwash them, that is just to prepare them to think critically and build that resiliency. The Ukrainians are bombarded on a daily basis with information warfare.”

Russia, he noted, recently released its first new currency since 2006 prominently featuring symbols of Crimea. “They are experts at this and the Ukrainians have to figure out every day what is real and what isn’t in the news. At our level, for the soldiers, it creates a tendency to mistrust information and it’s very hard to get away from that.”

Newman said much of what Canadians are experiencing is validating SOPs, which they’ve been able to share with their counterparts. But the task force is also absorbing lessons from Ukrainians. “They have learned the hard way, but they’ve learned a lot of ways of dealing with this,” he said of technically savvy junior officers and NCOs.

Those lessons will be passed on to the next Canadian Army rotation on the road to high readiness and incorporated into the training cycle. “We are learning how their enemy uses information, electronic warfare, unmanned aerial vehicles and indirect fire,” said Reeves.

“We’re also learning the way they collect human intelligence. We think in terms of tactical, operational and strategic assets. In this theatre of operations, tactical, operational and strategic are happening side by side, instead of one on top of each other. In the same battlespace, because it is so compressed, you will have people who are trying to conduct strategic intelligence gathering at the same time that they are trying to achieve freedom of manoeuvre at a tactical level.”

The foundation for Canada’s strength as mentors may lie in peacekeeping, but Reeves believes the Canadian Army performs training and mentorship well because “we come from a position of respect for these types of missions. We assume that we can both learn from each other and that we have shared goals.”

“Our men and women know the military is a force of last resort and therefore we’d better be damned good at what we do, because as the last resort there is no one behind us. But until there is a point where we need to pull the trigger, we have to exhaust all other options. We learn that right from day one of basic training and we approach the mission that way.”