Back to Basics: Return to Training Army Reserve Soldiers 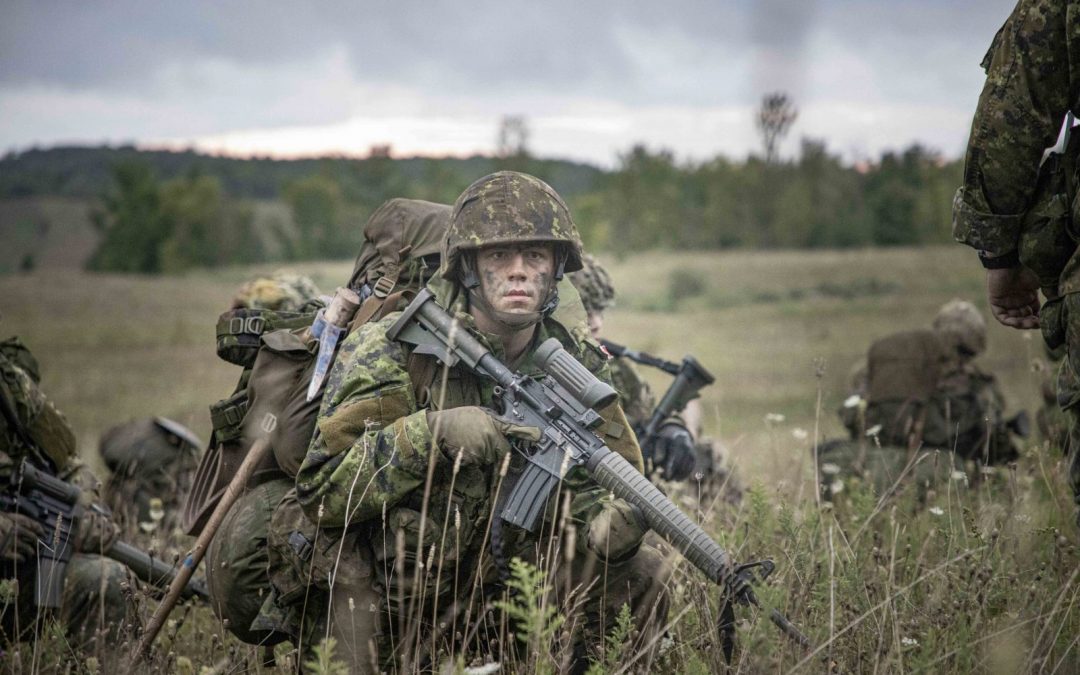 Training a large number of new recruits is a challenge for Army Reserve formations at the best of times. Add a global pandemic to the mix, and a team effort becomes even more of a priority.

31 Canadian Brigade Group (31 CBG), Canada’s Army formation responsible for all of Southwestern Ontario, has adapted to the new realities it faces in training the hundreds of new soldiers it recruits on an annual basis.

Utilizing local training establishments, an experienced cadre of instructors, new Force Health Protection measures and the sprawling training areas of 4th Canadian Division Training Centre (4 CDTC) in Meaford, the Brigade has seen recent success in running basic training in the “new normal.” We followed one such course “from flash to bang” during the Reserve Summer Training period in August, once training had resumed following the long delay caused by COVID-19.

Basic Military Qualification-Land 0378 (BMQ-L) began on Aug. 13, 2020 at Wolseley Barracks in London, a base with a long history of serving as a regional training hub, and producing generations of Canadian soldiers. BMQ-L is the land component to Basic Training for all Army trades except infantry, where the basic standard in ground warfare skills – like operating machine guns, learning rudimentary offensive and defensive operations and other tactical lessons – must be met for all soldiers in the Canadian Army Reserve. 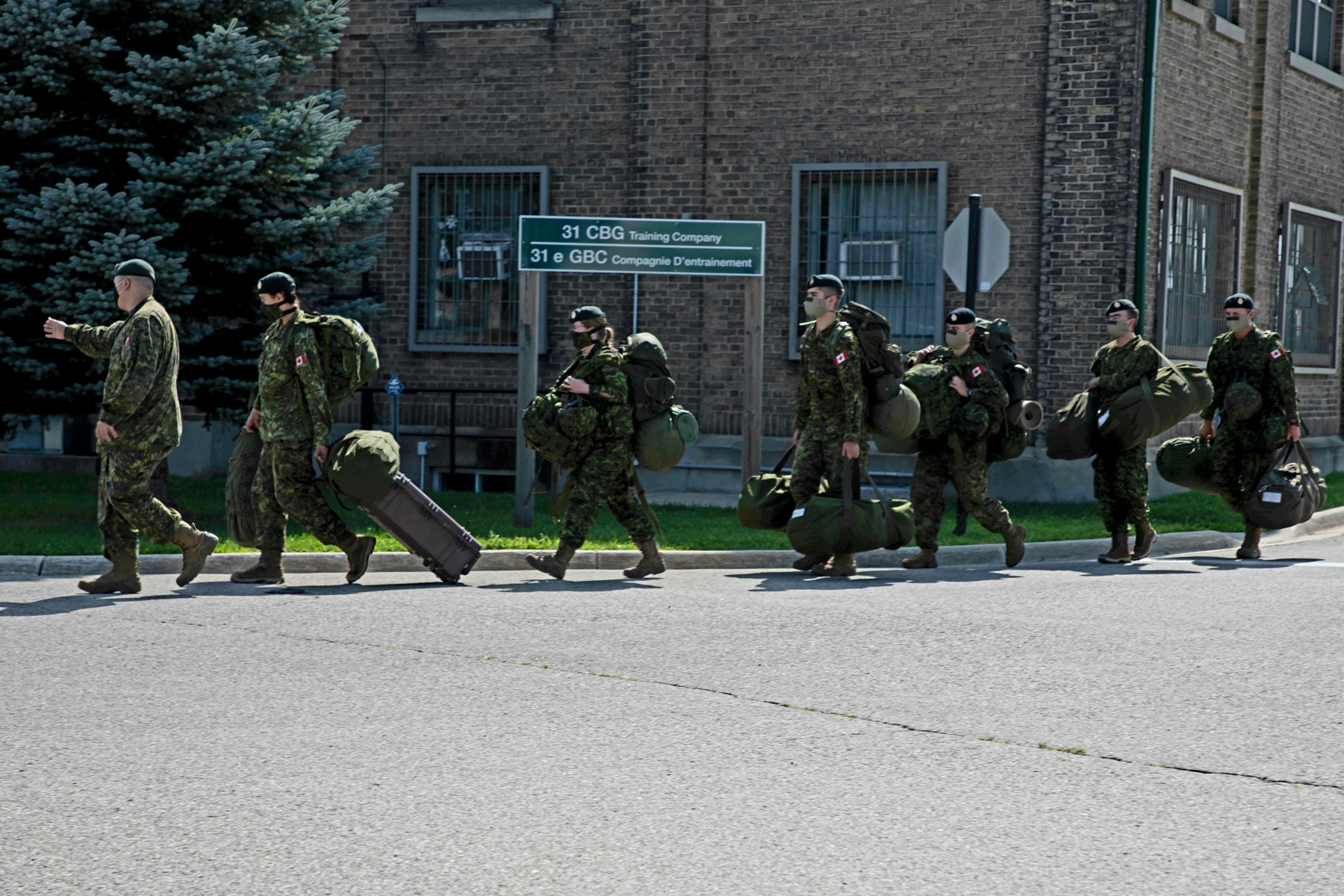 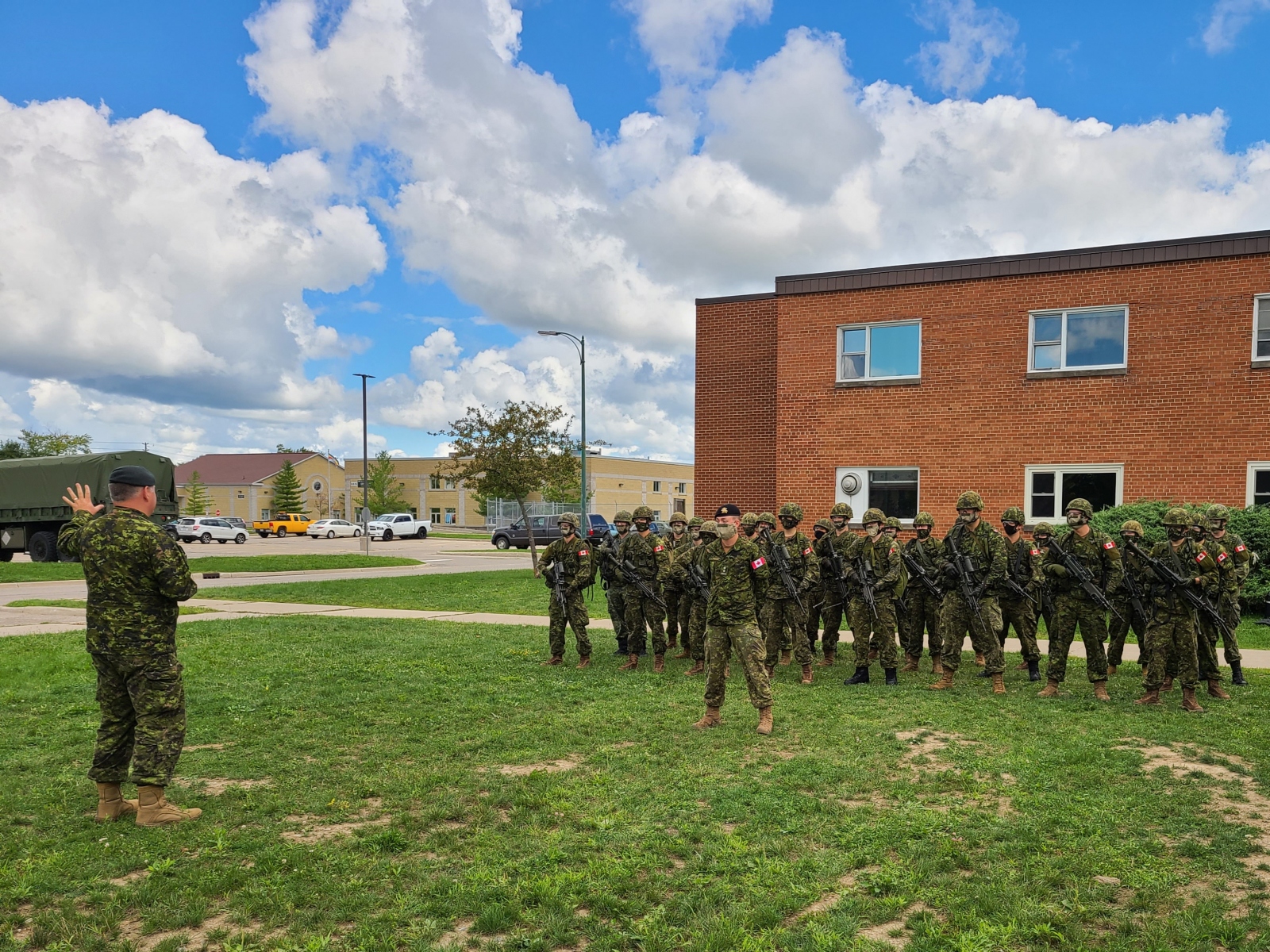 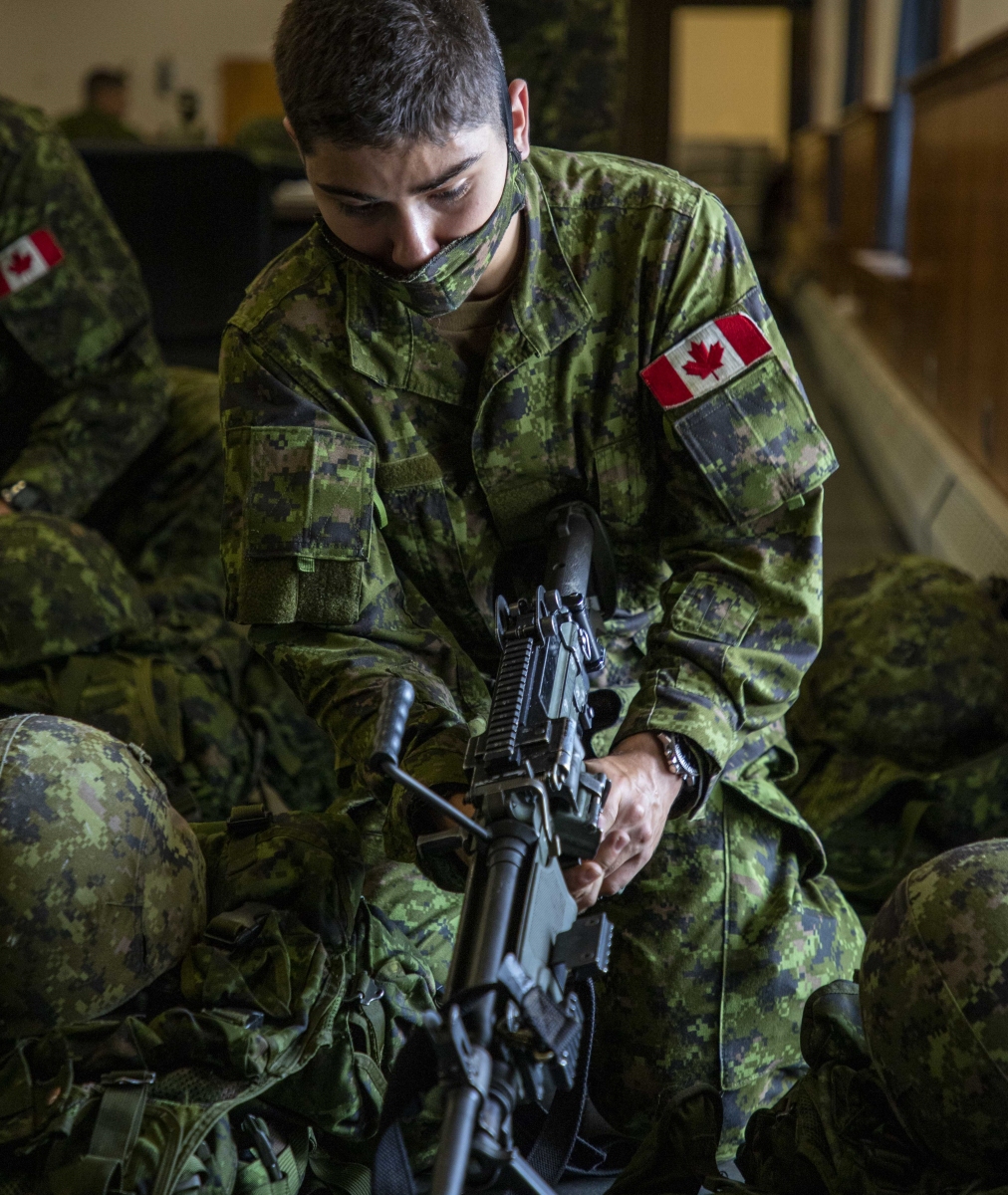 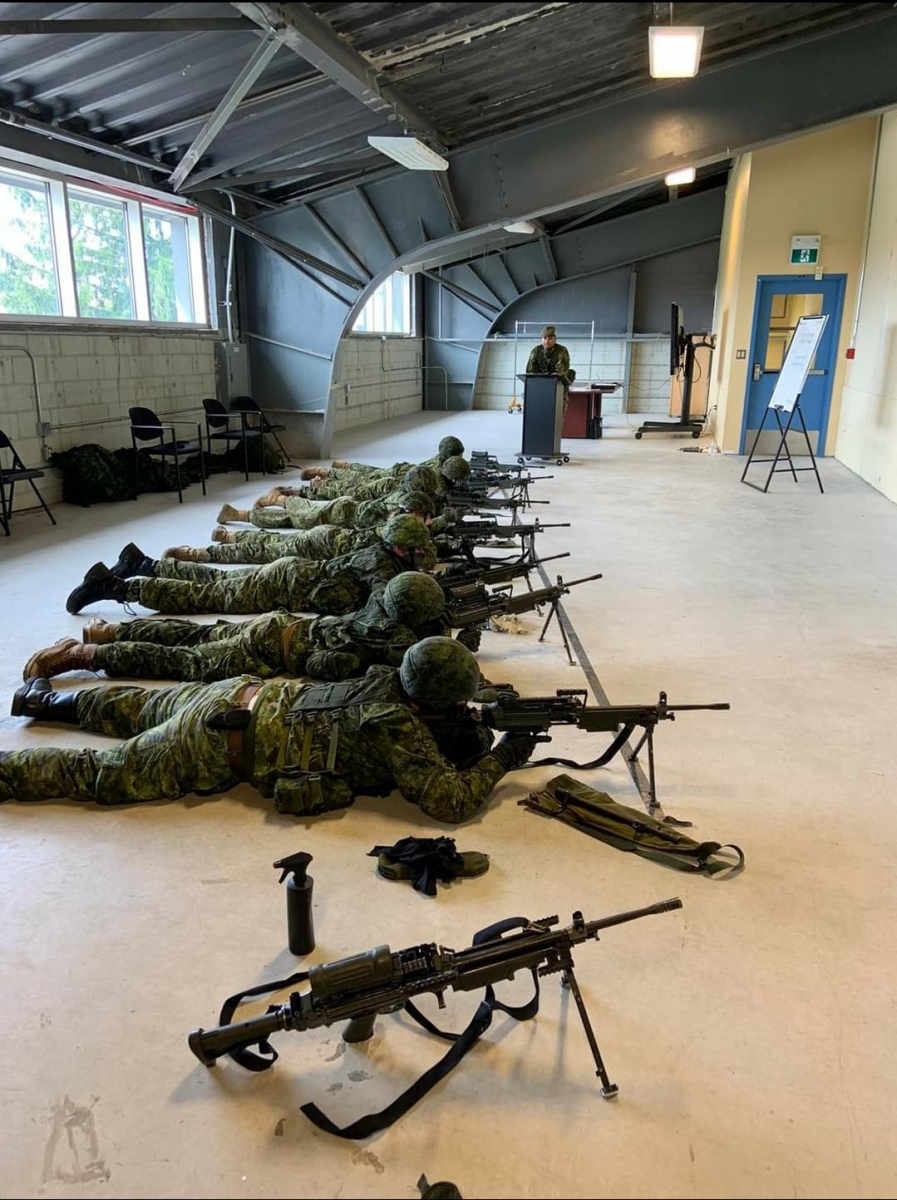 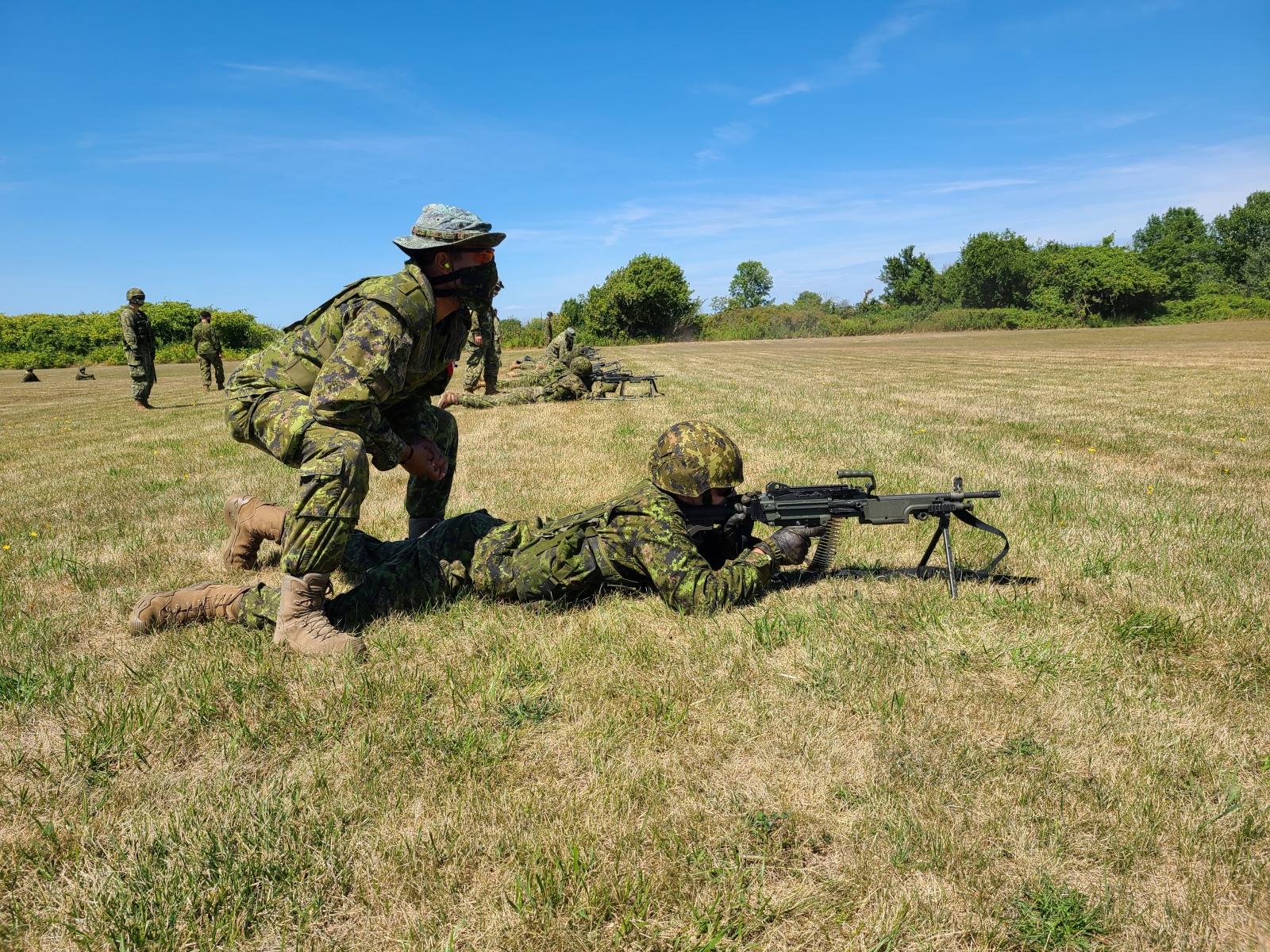 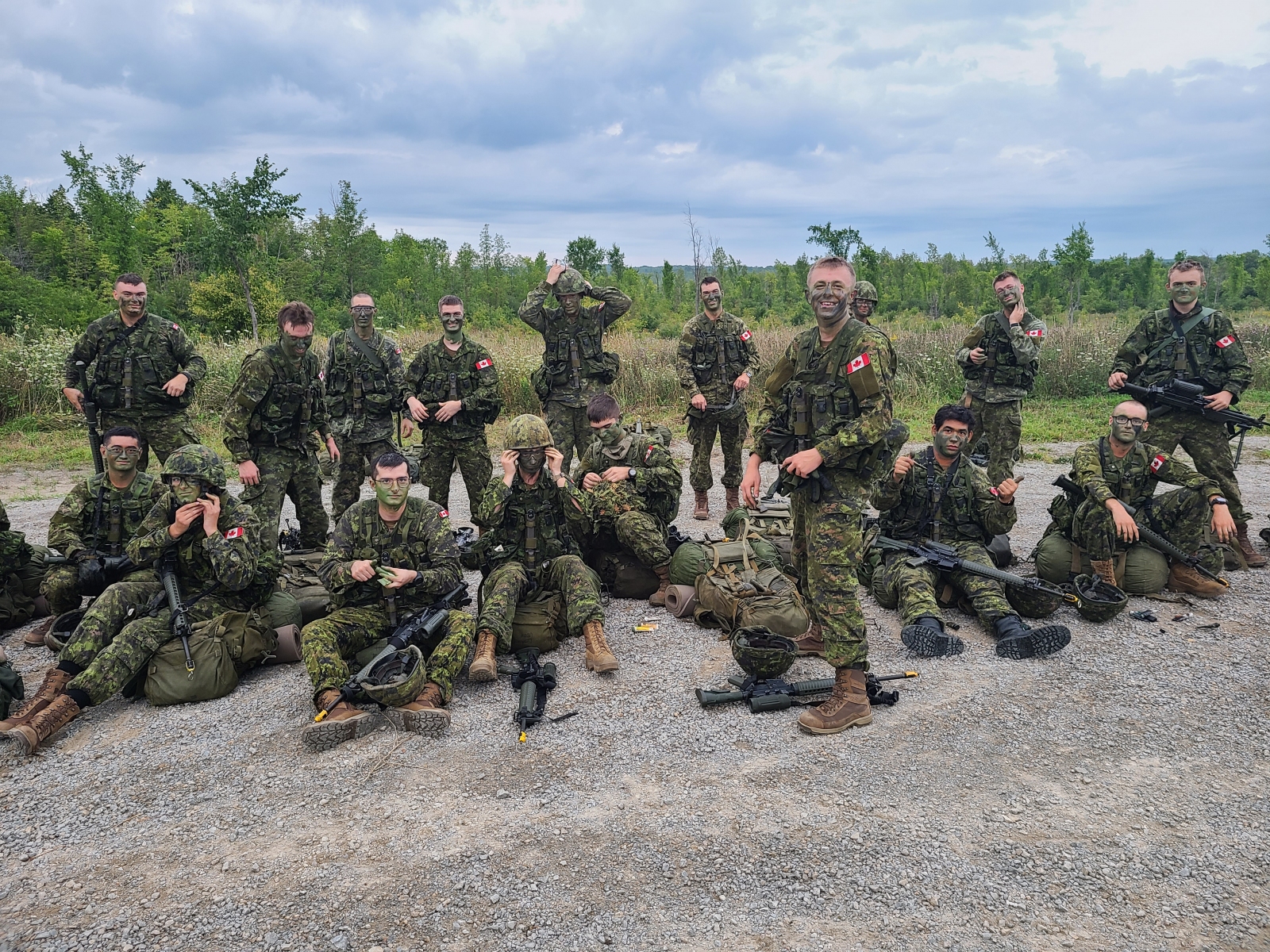 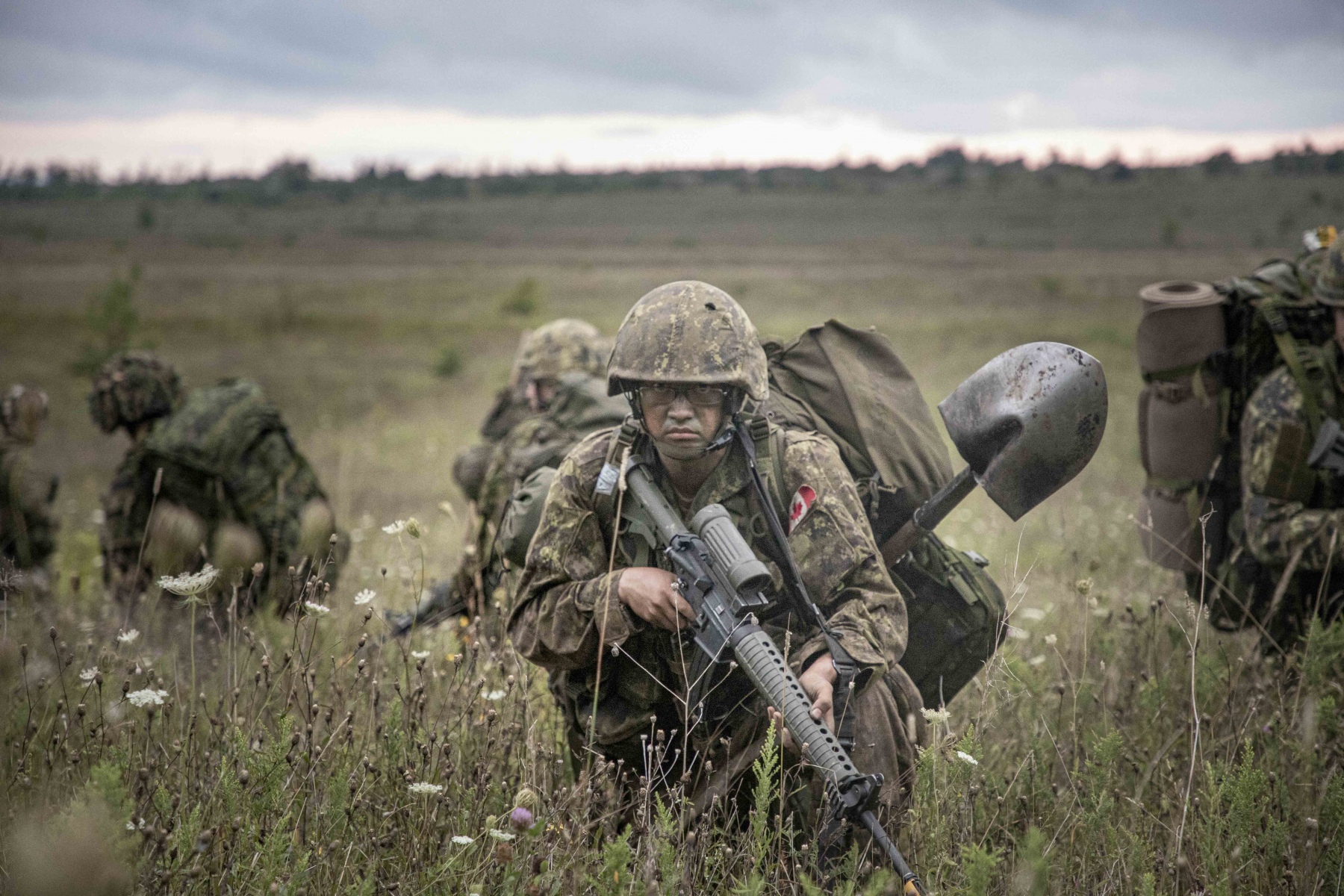 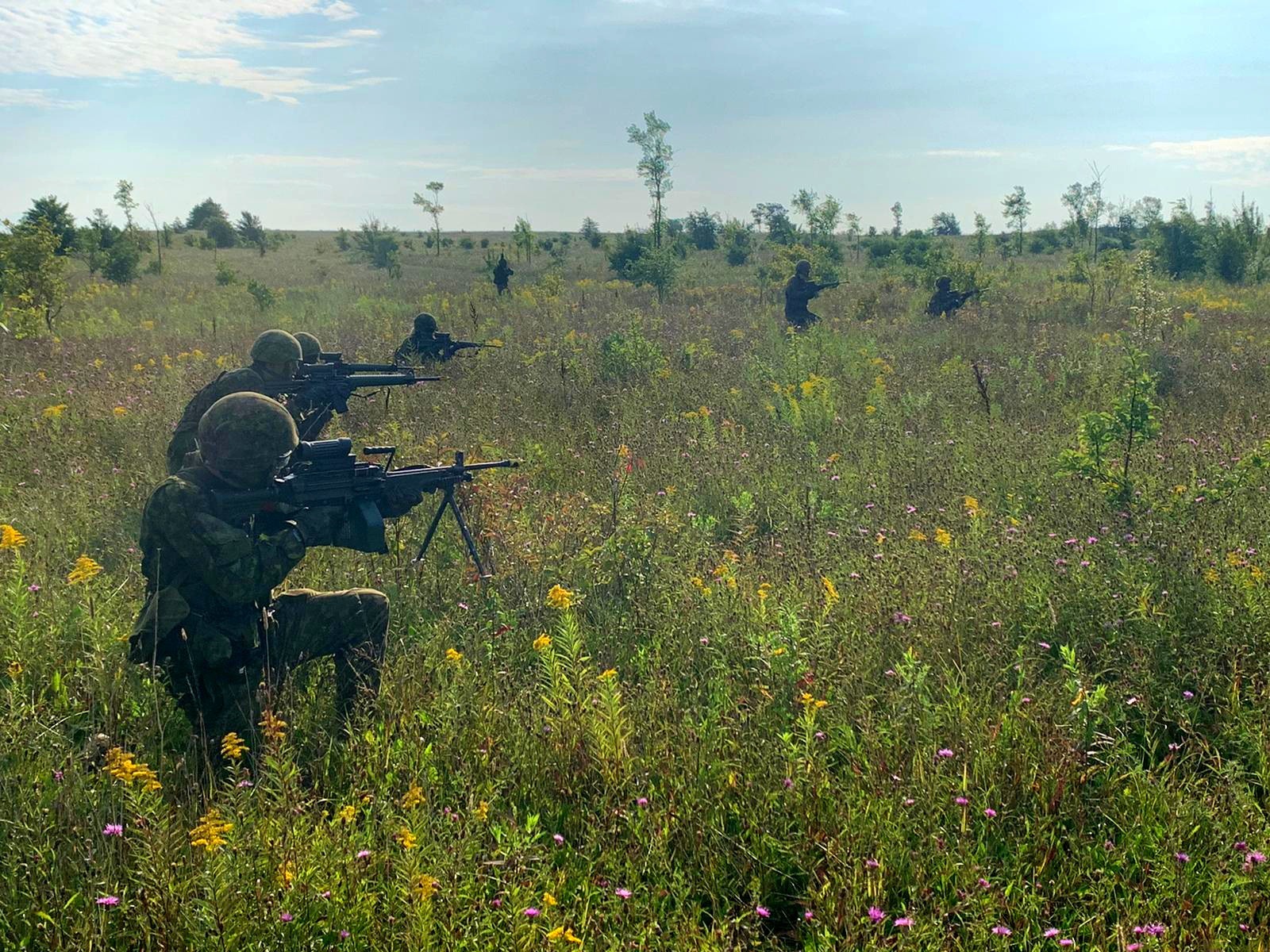 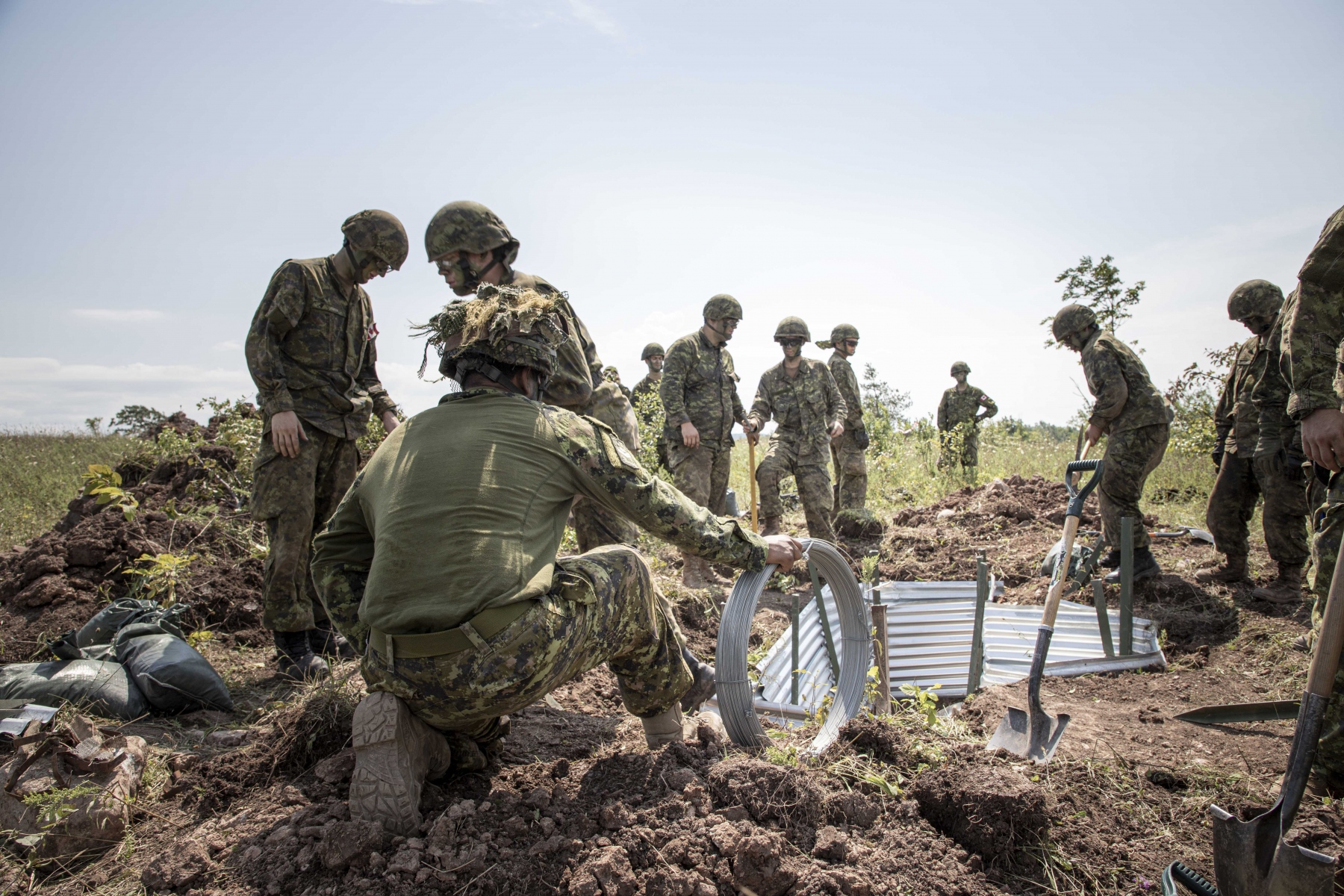 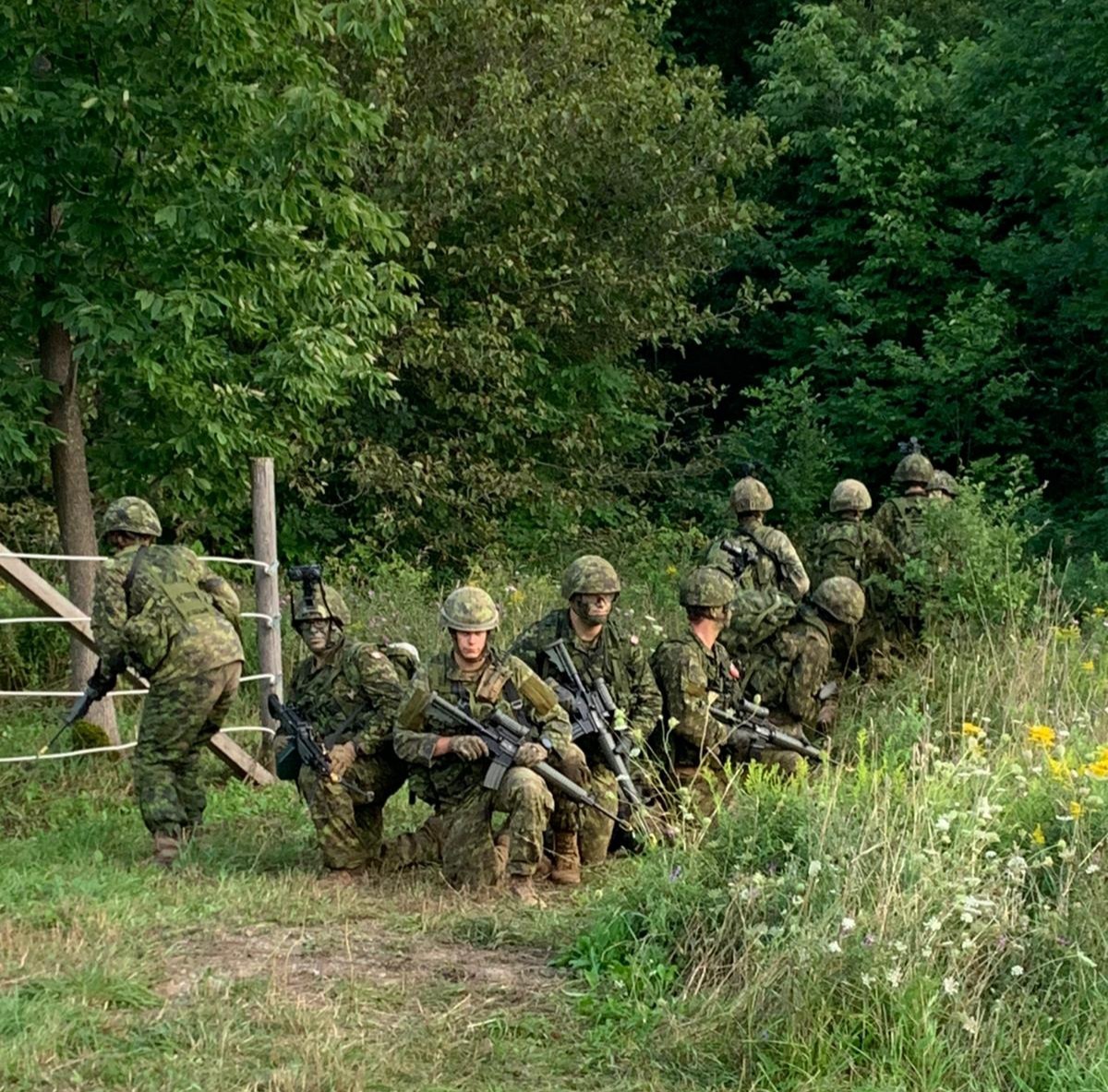 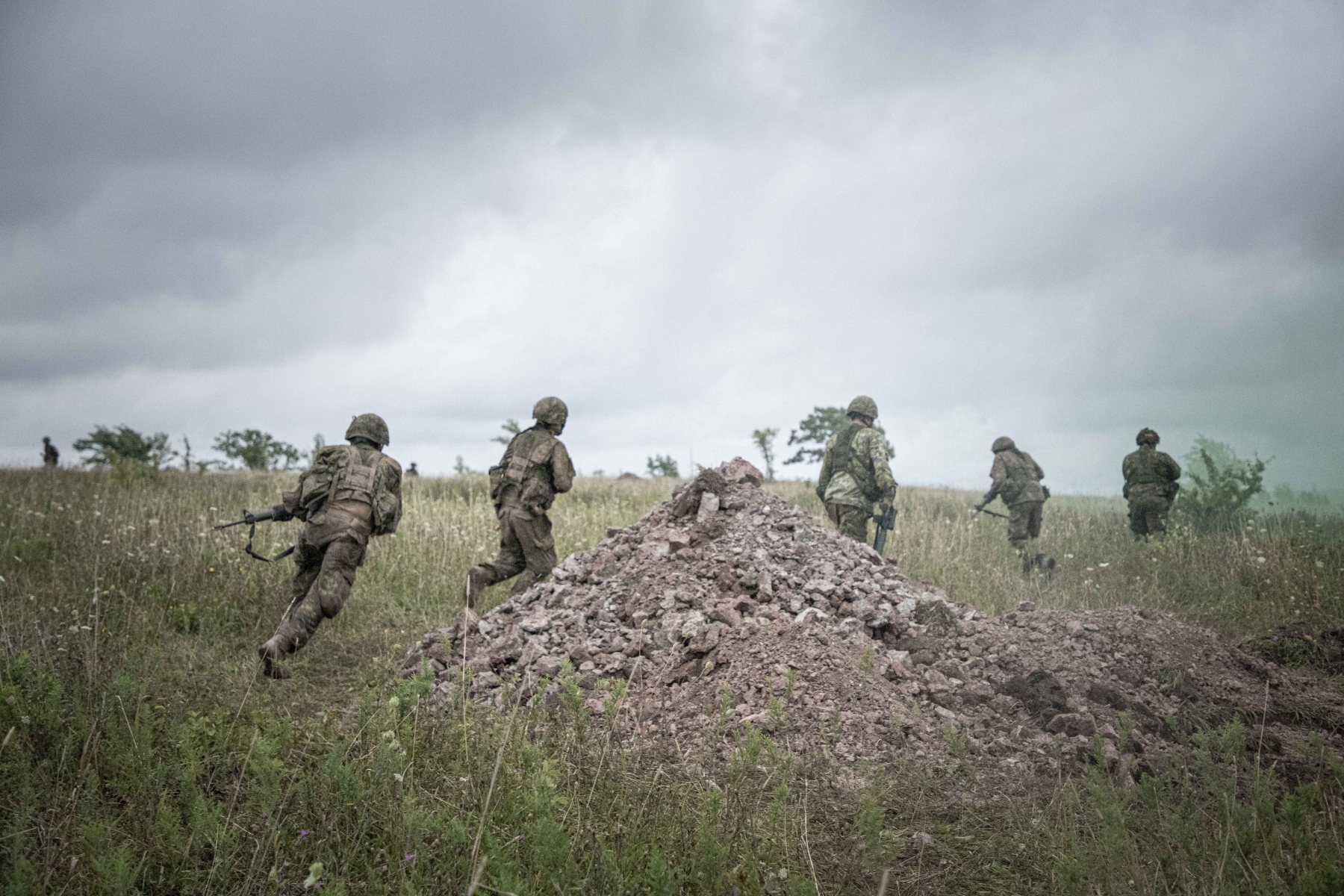 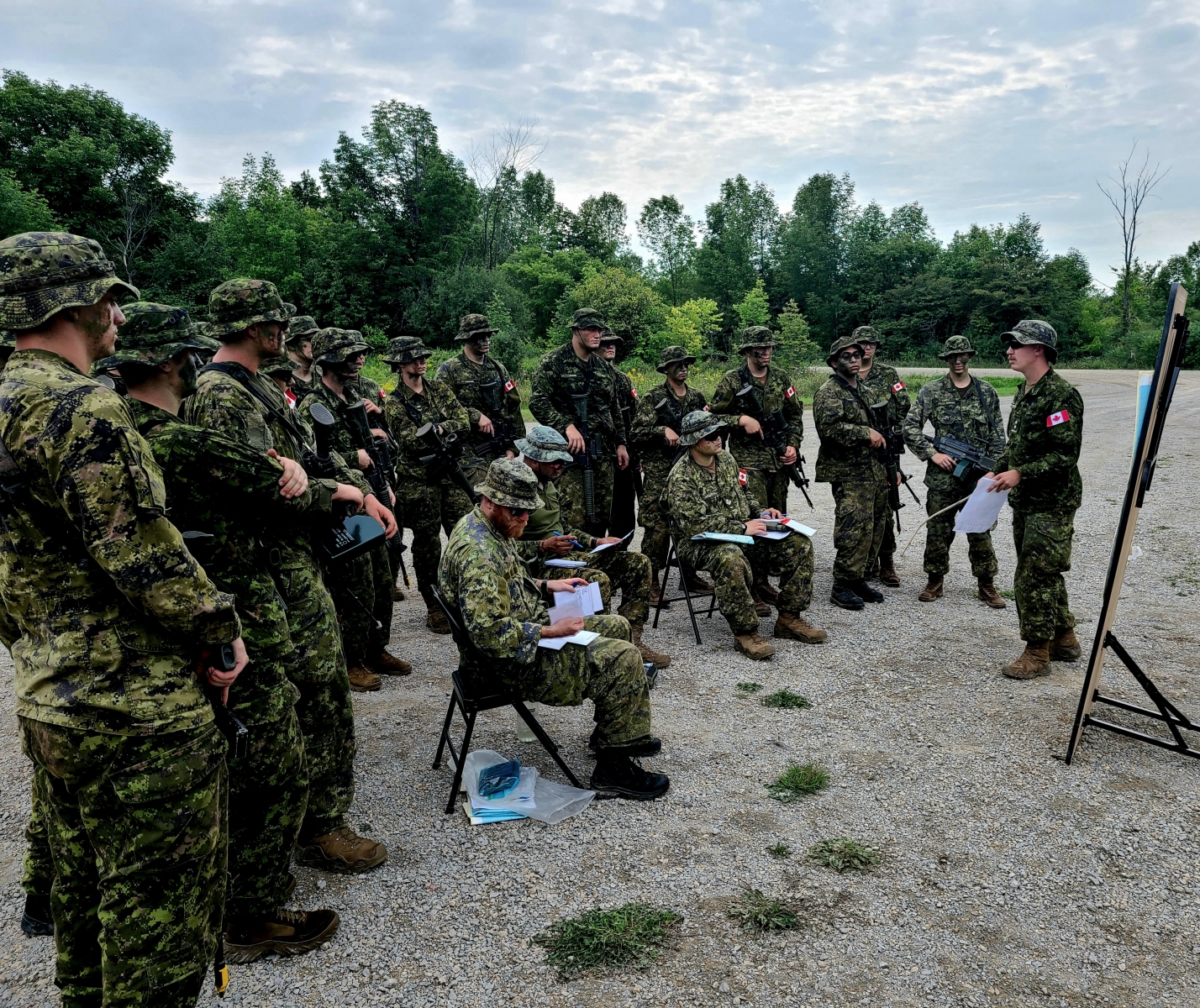 Candidates were organized into a course “bubble” meant to ensure public health and Force Health Protection (FHP). This included wearing masks where appropriate and possible, meticulous hand-washing and sanitizing of spaces, and physical distancing measures.

Candidates first completed their administrative entrance processes and set up living quarters in the gymnasium, and prepared learning spaces all around the base. The first days of their journey were spent in classroom settings, where communications, weapons familiarization and other basic skills were taught by experienced 31 CBG Battle School instructors, drawn from units all across Southwestern Ontario.

The four sections making up a platoon on the course conducted C9A2 Light Machine Gun (LMG) familiarization classes in preparation for their initial Weapons Handling Test, a precursor to the Personal Weapons Test (PWT). The initial familiarization classes and subsequent tests taught recruits how to safely and effectively operate weapons they could be issued back at their home units, once qualified.

These in-class sessions were followed by a familiarization shoot where candidates fired the LMG for the first time.

Communications are critical to mission success, and lessons on proper comms procedures, equipment operation and maintenance were important components of this BMQ-L training. Candidates learned the basics of military communications, including an introduction to common field radios of the Canadian Army that soldiers must learn to maintain and operate effectively. Multi-band, multirole, multifunction tactical radio communication transceivers provide capabilities for various operational roles, and once in the field on their final confirmation exercise, candidates would need to operate these systems on a basic level in order to report information up the chain of command and amongst supporting forces.

The soldiers then departed London for Winona Rifle Range, outside Hamilton, for their familiarization shoot before their final field phase began at 4th Canadian Division Training Centre Meaford – where they would be evaluated in a simulated combat environment.

“Force Generation is our top priority,” said Robinson. “Once we ironed out the issues with instituting and practicing strict Force Health Protection measures, we were able to restart our training programs safely, and effectively.”

The commander sees value in visiting and speaking with the troops as frequently as possible. “When the candidates see the Commander and Brigade Sergeant Major, and hear from us about our own experiences, it can really encourage them to work hard, as a team, and get through what can be a very challenging few weeks of intense training.”

BMQ-L 0378 began conducting familiarization shoots at the live-fire range at Winona Rifle Range on Aug. 20. Candidates were evaluated in safety, maintenance and basic operation of their weapons, before the final ranges that awaited at 4 CDTC Meaford, which would test and record accuracy and efficiency.

The troops finally got “all cammed up and ready to step off on their FTX” on Aug. 22, for conducting “section attacks, recce patrols and a defensive,” according to Warrant Officer Justin Chaston, the Course 2IC. The troops of BMQ-L 0378 faced several days of intense simulated combat, and were evaluated in tactical maneuvers, fitness, endurance, and teamwork, amongst other qualities.

In an effort to simulate realistic and mission-critical teamwork, candidates “even took part in orders for the Section commanders as ‘flies on the wall’,” said Chaston.

Familiarity with the orders process allowed individual soldiers to gain an understanding of the larger mission they would participate in, and provided situational awareness of “two-up intent” that benefits the general practice of mission command; even if at the most fundamental level.

This process would serve them well once they were engaged with the OPFOR (Opposing Force), made up of available, and more experienced soldiers. The candidates started on the offensive, with their teams’ mentors leading the way.

After weeks of preparations, candidates were led into simulated combat by their Section commanders — fully qualified and experienced members of the Directing Staff specifically chosen from 31 CBG units to train new recruits. The mentorship these instructors provided is critical to several aspects of simulated combat, as the scenario provided realistic training for candidates in advance-to-contact, support-by-fire and other tactical maneuvers, testing their new skills; but also offering invaluable and practical exercises for the experienced instructors.

“During the offensive portion of the exercise, the course conducted section attacks and reconnaissance patrols (by day and night), while living out of a patrol hide,” said Chaston. The course performed well and took several simulated objectives while confirming their skills as a team.

“Next up was the defensive portion.” After two days and a night of taking the fight to the simulated enemy, the candidates of BMQ-L were back at their hide, trying to catch up on sleep that remained elusive throughout the course that demanded constant movement and engagement. The respite didn’t last long. Word came down that OPFOR was preparing to assault their positions. The next lessons would be in the art of the defensive, where the troops would build static positions complete with barbed wire, trenches and mutually-supportive arcs of fire.

The final battle on most BMQ courses is an all-out slugfest, where ammunition is expended, and the course’s composite unit is either overrun, or victorious in the face of the attacking OPFOR. For BMQ-L 0378, the battle lasted several hours, and their defensive positions and newly acquired skills were just enough to hold off the assault on the night of Aug. 24-25. The three sections, organized into a platoon but made up of smaller fire-teams of two and three soldiers, consolidated their positions, conducted hasty after-action reviews with their instructors, washed up, sanitized their kit, and donned their masks once again for the journey back to London where it all began, almost two weeks prior.

As one of the first BMQ-L serials to be conducted by 31 CBG BSL in the “new normal” of the COVID-19 environment, success was apparent.

“Our soldiers and directing staff really stepped up in the face of these new challenges,” said Robinson. “And they proved once again that whether it’s working together to organize the use of facilities at several locations, following Force Health Protection measures, or facing a simulated enemy together, the key to success is working as a team.”

The lessons they learned were second only to the friendships they made and solidified. The key takeaway from this and every Canadian Army Reserve training serial was clear: the true path to success in any environment remains teamwork.