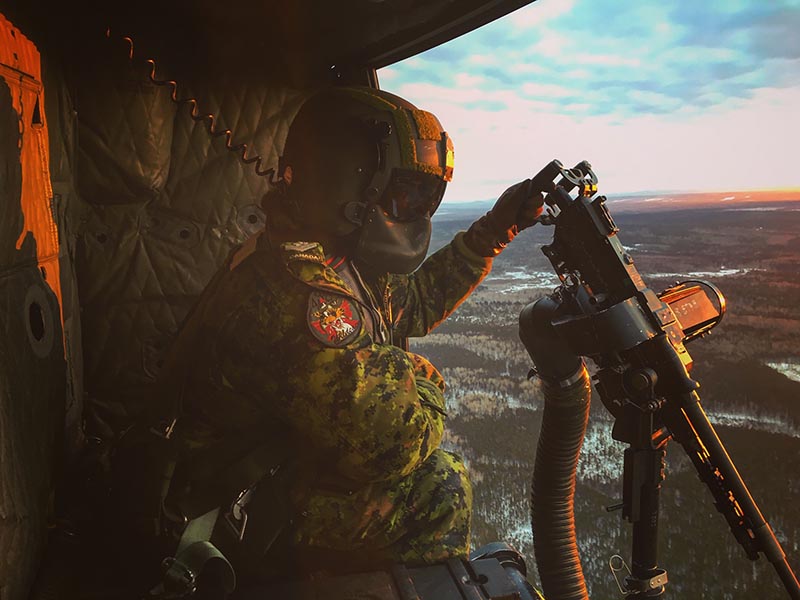 A Montreal-based Army Reservist has attained the distinction of becoming the second female door gunner in Canadian Army history.

While Sergeant Brigitte O’Driscoll of the Royal Montreal Regiment (RMR) does not consider herself a trailblazer in that sense, she does hope others will see what is possible for themselves by her example.

“People give me congratulations and it’s fun but in the end that’s not really why I’m doing it. If it inspires other girls and women to look into a career in the military or just encourages them to push through their limits and not be held back, that’s great.”

Door gunners are Army members trained to provide cover to those on the ground and the crews and passengers on CH-146 Griffon helicopters, which are operated by Royal Canadian Air Force personnel. Griffons are employed in a variety of missions ranging from search and rescue, reconnaissance, and casualty evacuations.

Door gunners are drawn from the Army’s combat arms trades, O’Driscoll explained, because they already have relevant training. That said, training for the job within Air Force lines did present challenges.

“In terms of weapons handling and the actual tactics it wasn’t that hard,” she recalled. “But in terms of learning about the Air Force and how it works, the information coming at you is like a fire hose,” she recalled. “I remember sitting in my first brief and not understanding a single thing that was being said. So learning the terminology they use, the way that they operate, it took a lot of time and studying but you catch on pretty quickly once you get the gist of it.” 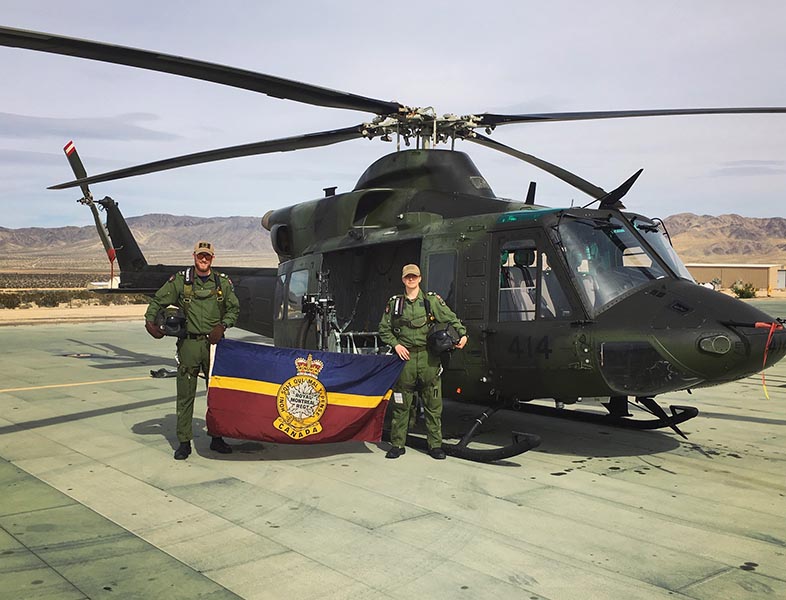 Sergeant Brigitte O’Driscoll and Sergeant Chris Lamb, who are both members of the Royal Montreal Regiment, during their Door Gunner training at the U.S. Marine Corps’ Air Ground Command Center in Twentynine Palms, California. Photo: Provided by Sgt Brigitte O’Driscoll.

“We flew down to California from Saint-Hubert in the Griffons, which was an awesome experience,” she added. “To fly over the Rockies and the Grand Canyon and things like that was pretty cool.”

O’Driscoll decided to pursue the opportunity after seeing a flyer advertising a door gunner selection process at RMR’s headquarters and saw it as an opportunity to expand her knowledge and skillset.

“Flying around in a chopper is not something you get to do every day in the infantry and it’s always a big treat,” she said. “And it’s just a different environment than what you’re used to in the infantry. It’s a whole new world basically, so I was really keen on learning a lot more.”

She hopes to eventually deploy and apply the training in an operational environment – an ambition that has been stoked by speaking with another Montreal-area Reservist who has served in Iraq.

“Hopefully I’ll be deploying next year or maybe the year after but, yeah – it’s a huge goal to be able to deploy and operate as a door gunner in theatre.”

O’Driscoll joined the RMR in 2013 and said she would recommend it to anyone.

“It’s just a great job for pushing your limits, making new friendships, and exploring a lot. I know it’s the typical thing that people say, that you get to travel a lot, but I have been to a lot of places and done things that I wouldn’t have been able to do if I wasn’t in the military.”