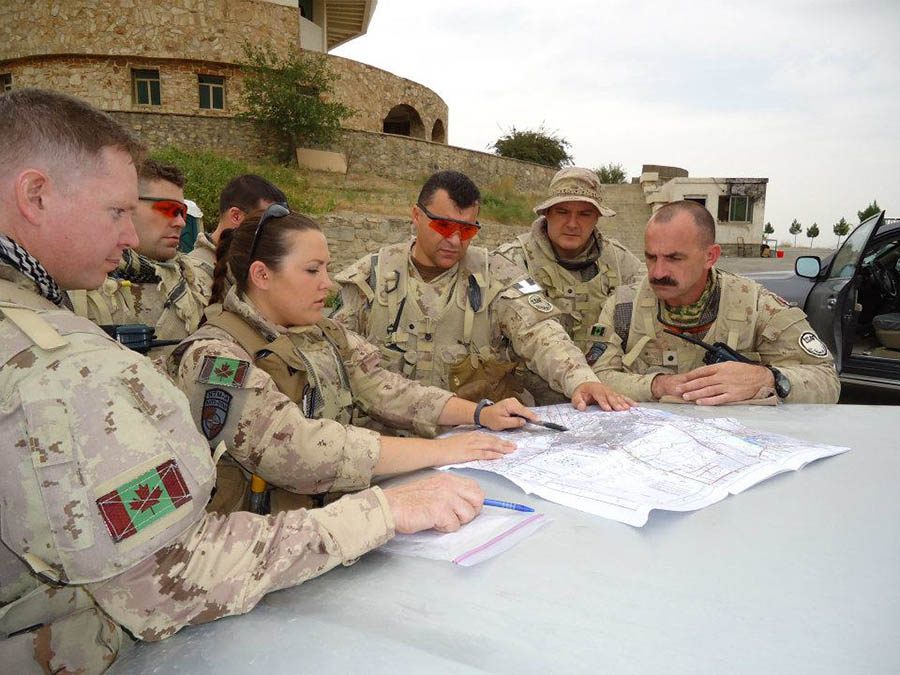 “First In – Last Out.” No one holds the first part of the motto of armoured reconnaissance squadrons truer than Major Gillian Dulle, Commander of the Saskatchewan Dragoons.

“First In – Last Out” is the motto of their trade because they go ahead of the main force to obtain enemy information and then provide a screen for moving troops.

When Maj Dulle took command of her Moose Jaw Canadian Army Reserve regiment in May 2016, it marked the first time in the history of the Canadian Armed Forces that an armoured reconnaissance commanding officer was female.

She didn’t know it at the time and it made little difference to her when she learned of it. She simply set out to continue doing what she knows best: leading her troops.

“I was already the Commanding Officer before someone informed me that I was the first female armoured commanding officer. It wasn’t something that I knew when I took the job. I try not to make a make a big deal about it,” said Maj Dulle. “I got to this position because I am competent and capable, not because I am a woman.”

“It is interesting and it is a footnote in history. It is bizarre though, that it has been over 30 years since women have been allowed in the Combat Arms and we are finally starting to see female commanding officers and female sergeants major,” she said.

“It is a part of history and shows how our military has adapted and changed. We are at a point in history where those changes are starting to catch up on the command level.”

‘Combat Arms’ is a collective term used to describe the four combat-focused occupations within the Canadian Army: armour, artillery, infantry and engineer. Infantry directly engage and destroy enemy forces, while the others provide firepower and destructive capabilities on the battlefield.

Maj Dulle joined the 38 Canadian Brigade Group’s Saskatchewan Dragoons in Moose Jaw, Saskatchewan in 2003 as a non-commissioned member. Still in high school, she looked at the job as a way to earn money and it was certainly better than her alternative plan of working at the local gas station.

In 2009, she deployed to Kandahar, Afghanistan where she worked to build and improve strategic relationships in the region.

Her second tour in Afghanistan was in 2011-2012 with Operation ATTENTION Roto 0, where she mentored Afghan soldiers at the Afghan National Army Staff College in Kabul, Afghanistan. During this deployment, her gender became a point of contention for the first time in her military career.

“The only time that I have truly faced challenges as a woman in my career was when I was mentoring the Afghan National Army. That was more of a cultural barrier and once they learned that I knew what I was doing and that I had combat experience in Kandahar, my street credit went up and it wasn’t an issue anymore,” said Maj Dulle, who added that throughout her training, courses and deployments, being female has otherwise never been a negative for her.

“I joined the Combat Arms, so I have always been in the minority. It was always a concern in the back of my mind, not anymore, but when I first joined. Nothing ever materialized.”

Reservists have more women in the Combat Arms than the Regular Force: 5.6 per cent to the Regular Force’s 2.4 per cent as of 2016. The totals are rising and the Combat Arms’ officer occupations with the highest representation of women are artillery and engineer. Among the combat arms’ non-commissioned member occupations, artillery and armour have the highest representation of women.

When it comes to the difficulties of the position, Maj Dulle faces the same obstacles that other commanding officers of a Combat Arms Reserve regiment face.

“Time is always a challenge. The Reserves are part-time, but when you’re commanding a regiment, it is not part-time,” she said.

“You are trying to manage a civilian job, family life and asocial life and encompassing all that is the fact that you are in a command position. The job doesn’t just warrant your time one evening a week and one weekend a month. You are always in command and things come up,” said Maj Dulle.

“It is challenging managing the various aspects of the position and trying to lead a normal life, but it is a very, very rewarding job.”