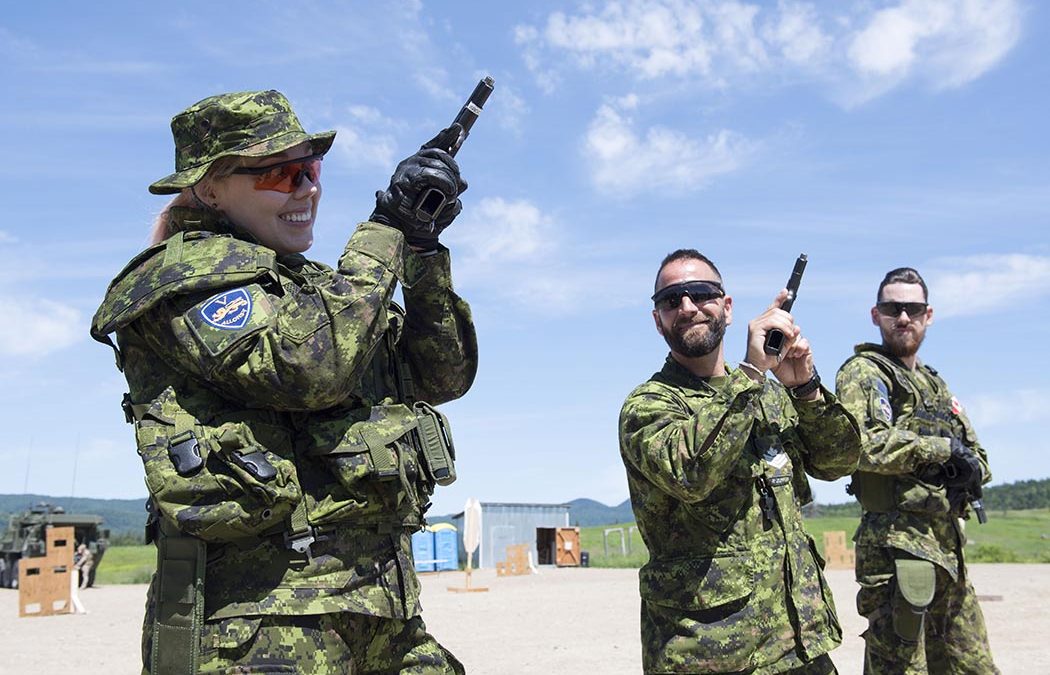 Stéphanie Harvey – known as “missharvey” by the international video gaming community – is a five-time world champion in the Counter-Strike shooter video game. In July 2019, she was at 2nd Canadian Division Support Base Valcartier to learn how to shoot with real weapons.

Ms. Harvey is a video game designer at Ubisoft Montréal, as well as being a prominent professional player on social media. She is followed by 116,000 people on Twitch alone, a platform where live video games can be watched.

During her visit on July 18, Ms. Harvey was accompanied by four members of 1e Battalion, Royal 22e Régiment. After donning Army battle dress, the young woman was driven to the training areas where she was able to test her shooting skills. She was able to learn how to use the C6, C8 and C9 machine guns. She also tested a 9mm Browning pistol and a C14 Timberwolf sniper rifle.

With a smile on her face, while being very attentive to the instructions of the military, Ms. Harvey practiced for nearly an hour under a blazing sun. She compared this rather physical experience to her workouts in the gym.

This incursion into the military world was not the first for the professional player. A few weeks previous, she parachuted with the Canadian Armed Forces Parachute Team, the Skyhawks at 3 Wing Bagotville. She then emphasized the similarity between the teamwork of the military and that of professional video game players.

Corporal Cédric Sabourin was one of those who accompanied Ms. Harvey during her visit to the Valcartier base. He said that she was enthusiastic and had a number of questions. Cpl Sabourin noted that the professional player was able to make impressive group shots with a pistol, a rare occurrence for someone starting out.

Ms. Harvey finally had the opportunity to practice urban combat as part of a simulation at Building 3 of the Militia Training Support Centre. According to Cpl Sabourin, she observed a number of parallels between the actual attack strategies and those advocated in the Counter-Strike video game as “coverage angle monitoring.”

Ms. Harvey advocates for women’s rights in video gaming. A few years ago, she spoke out against sexism and gender discrimination among professional video game players. She stated that barely 5% of professional players are women and deplores the disparities between the incomes of women and men in this area. She also denounced the daily verbal attacks and sexual harassment perpetrated against women video game enthusiasts.

“I was a pioneer in my field when I started playing video games professionally. It was not easy. On the Internet, people do not care about the repercussions of insulting someone else. They do not see the sad faces behind the screens. I had to grow a really tough skin to be able to succeed,” Ms. Harvey said in an interview.

In 2016, in collaboration with other professional players, she founded Misscliks, an online community offering a healthy space to promote the presence of women in the professional video gaming community.