A tests of combat arms leadership 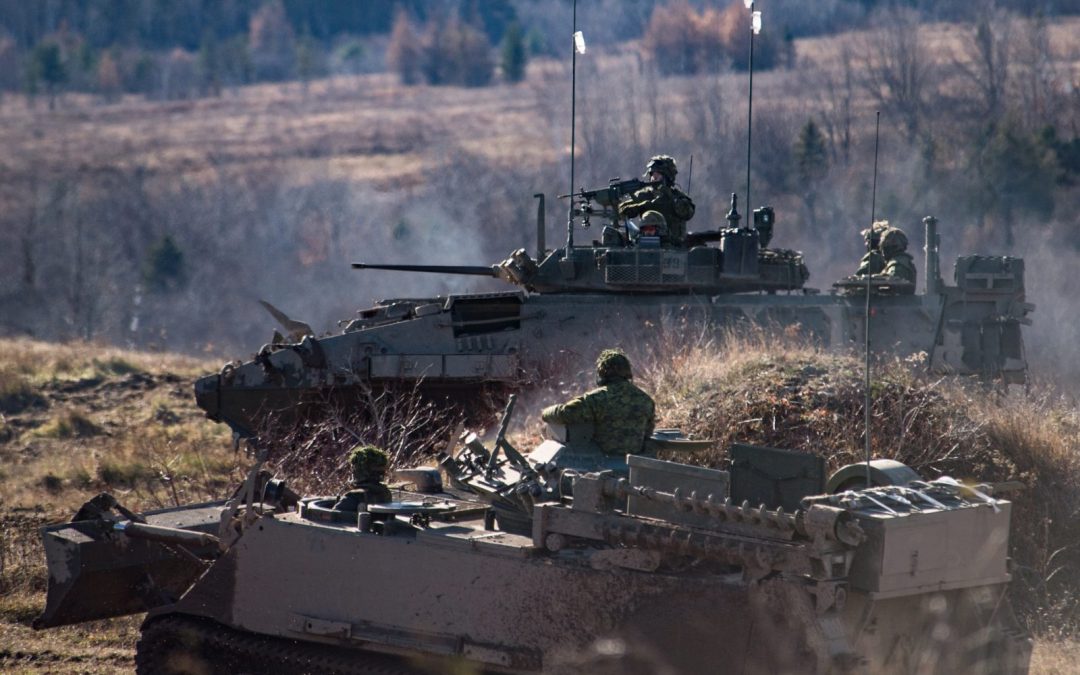 It is arguably one of the more difficult exercises in the career of a major or seasoned captain – Exercise Common Ground. For an intense 24-hour period, young leaders are thrust into command of a combined arms team for the first time in a scenario that replicates many of the stresses, friction, teamwork and communication of combat.

“It does feel like they are in a command role in a real operation,” said Major Jonathan Hubble, chief instructor for the Army’s Tactics School at the Combat Training Centre in Gagetown, N.B., and the deputy exercise director of Ex. Common Ground 2018, held in the unexpectedly frigid conditions of mid November in the 5th Canadian Division Support Base Gagetown training area. “They have a better feeling for what it will be like under the pressure of an operational situation.”

Common Ground serves as the culmination exercise for the Combat Team Commander Course, the final 13 days of a tough six-week program to hone leadership skills and the knowledge to integrate armour, artillery, infantry, engineers and other enablers in a combined arms teams, the Army’s core fighting element.

“It’s a lot of training compressed into a small window,” acknowledged Hubble, but a crucial stepping stone to earning command of a sub-unit, such as a company, squadron or battery.

Candidates on the course command a company or squadron group, this year provided by the 2nd Battalion of the Royal Canadian Regiment Battle Group (2 RCR BG). For an armoured squadron, that is often three troops of main battle tanks, a headquarters element, sustainment echelon, plus attachments such as an infantry platoon or entire company, an artillery tactical group (forward observer team) to call for artillery fires, and other reconnaissance assets such as recce teams or CH-146 Griffon helicopters from 403 Tactical Helicopter Squadron.

“These combined arms teams are mission-tailored for specific tasks,” Hubble explained. “It’s based around the concept of modularity. We task-tailor our mission elements to the task itself, as opposed to saying this is an armour job, this is an infantry job. That level of coordination is very realistic and challenging. Candidates have to come out of their armoured or infantry command and control spheres and [reach] into the larger battle group sphere to request and employ assets. The exercise is fundamentally designed around getting them to command a sub-unit or combat team in the combined arms setting within the battle group context.”

To fully test the capabilities of the 33 infantry, armour, engineer and artillery officer candidates on the course, the 2 RCR BG supplied the blue force with two rifle companies, a squadron of tanks from the Royal Canadian Dragoons (RCD), and combat support elements from the 2nd Regiment of the Royal Canadian Horse Artillery (2RCHA) and 2nd Combat Engineer Regiment (2 CER). In addition, 2 RCR also provided a company of opposing force (OPFOR).

“Without that support the exercise simply would not function,” said Hubble.

While the candidates of the Combat Team Commander Course are the primary training audience, Common Ground, now in its fifth iteration, also brings together soldiers from the Company Sergeant Major Course, Squadron Sergeant Major Course, Advanced Sniper Course, Infantry Officer Course and Advanced Reconnaissance Patrolman Course. Training objectives might be different, but the large-scale exercise provides the common scenario – a Canadian Mechanized Brigade Group in a multinational coalition force confronting a near-peer enemy occupying a friendly nation – in which to achieve them.

And many objectives align. The Company and Squadron Sergeant Major Courses fit well together, for instance, “because as soon as you have a company, you have a company sergeant major, so there is an opportunity for that training to happen concurrently across elements of the combat team, from the highest level of command to the grass-roots soldier on the ground,” said Hubble. 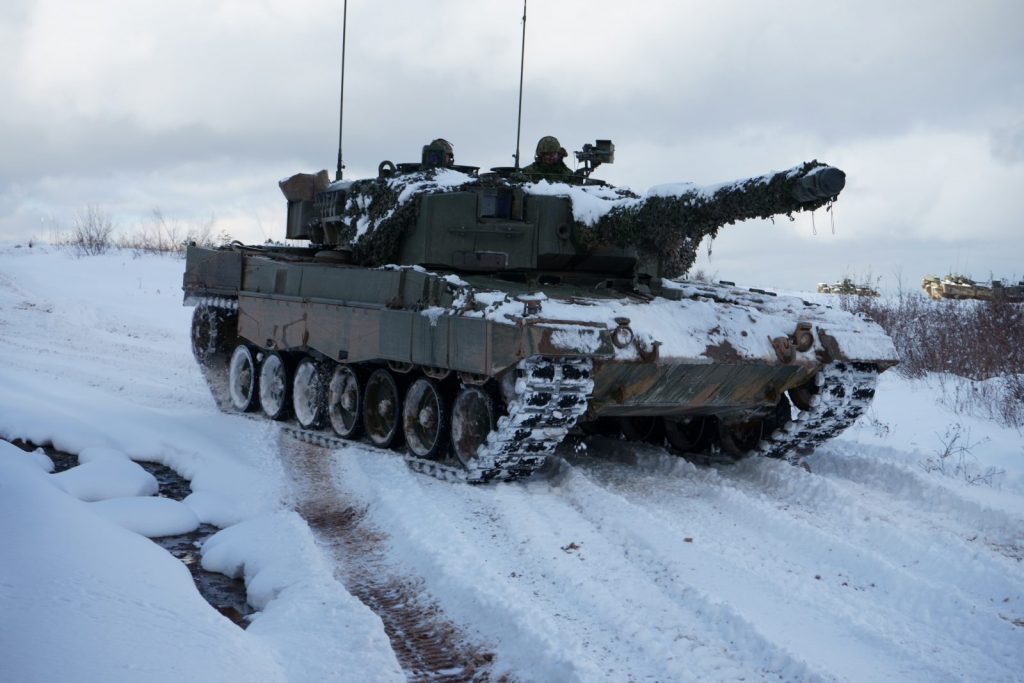 IN THE HOT SEAT

Weather is always a factor on operations, but few candidates were expecting the freezing rain, sleet, snow and bone-chilling temperatures that converged on the training area over the two weeks. Nonetheless, it became one more element to battle as officers and their assigned sergeant majors developed plans for their 24-hour assessment periods.

A day before assuming command, candidates briefed the commanding officer of the 2 RCR BG on their proposed battle procedure, received feedback, and conducted a table-top rehearsal of their mission. Hours later, they repeated the process with the various sub unit leadership elements of their combat team.

Though the primary task is assigned well in advance and can range from advance-to-contact with a deliberate attack, to a delay operation, a hasty attack or a flank guard, candidates are often given additional tasks in the heat of the battle.

“They may anticipate a change or extension to their mission, but the dynamic situation means that these changes will only become clear to them within an hour (or perhaps minutes) before they must execute a task,” said Hubble. “They have an element of the unknown at certain points in their task. That is to replicate the friction of a dynamic situation.”

A deliberate attack might involve coordinating armour and infantry to take an objective from OPFOR, manoeuvring tanks into fire positions to fix the enemy in place while an assault force uses the cover of artillery fire and concealment to advance on the objective. It might also involve an inject such as enemy obstacles that require engineers to breach.

A similar deliberate attack scenario was also conducted in an urban environment, where candidates were tasked to seize a building containing high-value equipment. “It changes the nature of the problem sufficiently to give them a challenge,” said Hubble. “It’s still done in the context of the all-arms battle. You need that artillery fire-support, perhaps with smoke to cover your movement, or illumination at night, or precision fires on a specific target to minimize potential collateral damage. And the engineers are critical in an urban fight for mobility and counter mobility.”

New for 2018, Common Ground challenged candidates to conduct a delay task as part of a larger defensive plan within the brigade, setting hasty defensive positions and engaging the enemy along a route for long enough to give a higher commander sufficient time to prepare defensive areas.

“They are walking a fine line between withdrawing to the next successive battle position and becoming fully and decisively engaged,” said Hubble. “We find this is a very challenging manoeuvre to do. Part of the planning would be identifying what the engineers do to slow down the enemy, and how to use artillery fire-support to provide cover as you withdraw, all in combination with the manoeuvre plan.”

Very little of the exercise is notional. With the exception of higher brigade or division headquarters, everything is conducted as a real operation. That includes the creativity of the enemy. “[They did] a good job of making the candidates think on their feet. They used the ground the way a thinking adversary would, which is what we need in a realistic training environment.” 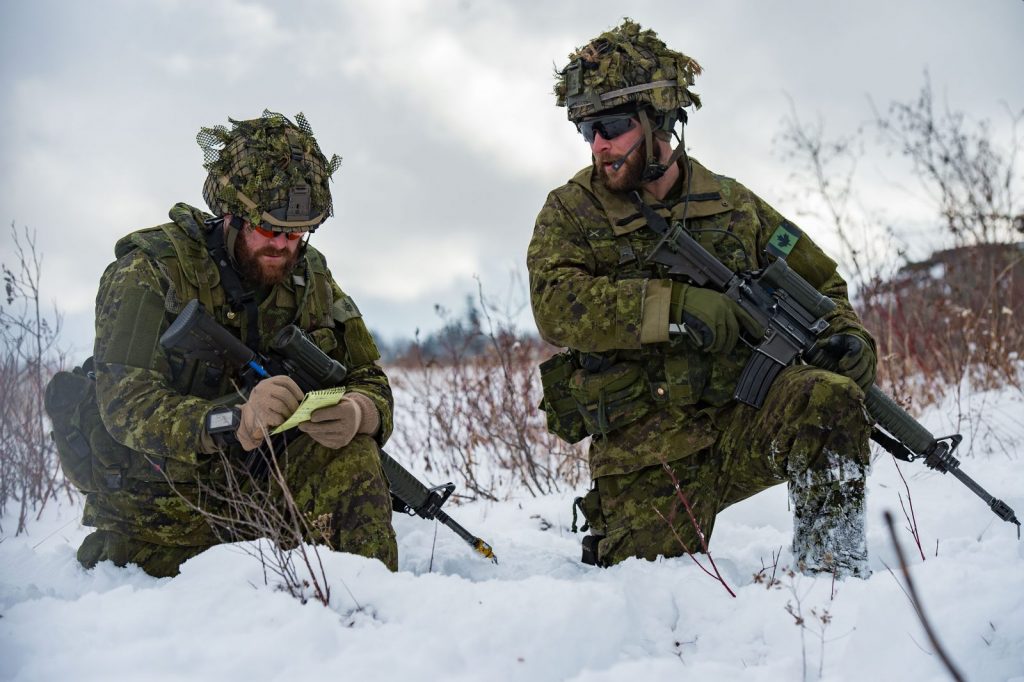 For the 60 warrant officers from the infantry and armour schools on the Company and Squadron Sergeant Major Courses, the three-week classroom and field exercise is affirmation of much of what they’ve done over their careers. Still, it is a step on the road to becoming a company, or squadron, sergeant major, and their 12 hours of assessment on Common Ground provides realistic training.

“As a warrant officer, I [often] need to step up to take the place of the sergeant major, so this is nothing new for us,” said Warrant Officer Pascal Bison, an 18-year veteran of the Royal 22e Régiment currently working at the Royal Military College Saint-Jean. “[But] this is a good opportunity to practice and be in the breach in a complex environment before we have to do the job for real.”

For Warrant Officer Tracy Hamilton, a 24-year career infanteer from the 3rd battalion of the Royal Canadian Regiment, with deployments to Bosnia, Kosovo, Kabul and Kandahar, the sergeant major’s role is well understood, but the exercise tests the problem-solving function they perform, from ensuring sustainment of the operation to preparing soldiers and equipment, to dealing with the aftermath of casualties, detainees, and vehicle repair and recovery.

“As non-commissioned members in the Regular Force, we are always working one or two levels up,” he said. “If I don’t know what my sergeant major’s job is by now, then I’m asleep at the wheel. But there are a couple of things we learn here.”

One key strength of the exercise is the opportunity to work on finding common approaches to building a command team with a new officer, said Bison. “The majority of the guys on this course have 20 plus years of service, so it’s not new to meet up with a new officer and form a team. But you need to build something strong if you want your troops to follow you in war.”