A digital call for fires 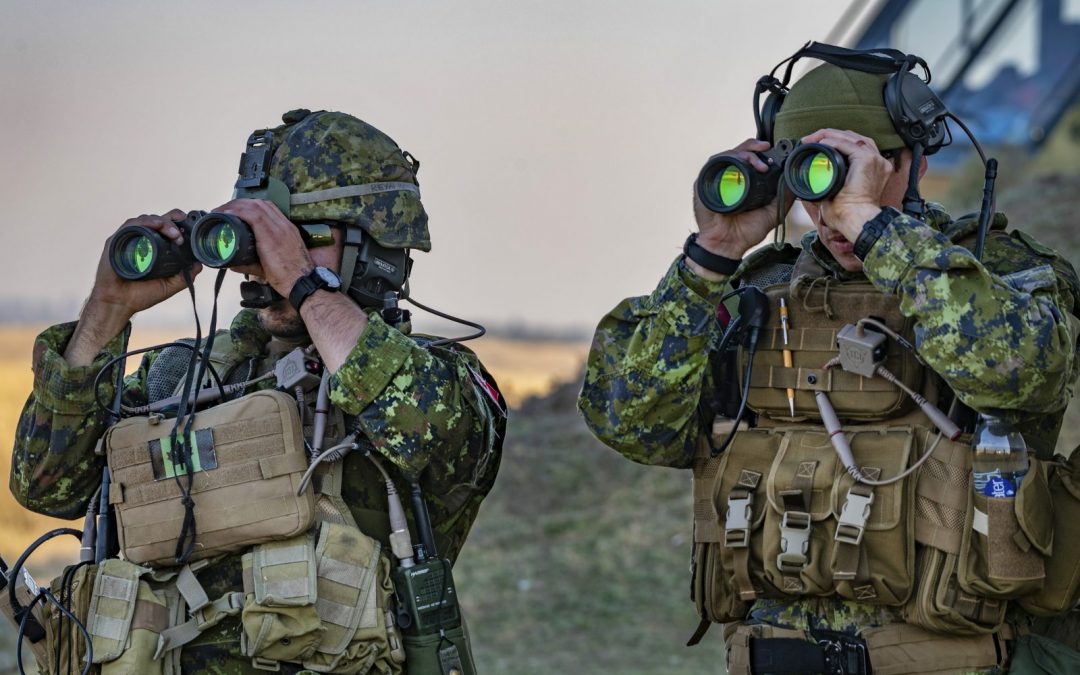 When Canadian Army Joint Terminal Attack Controllers (JTACs) walked away from the ramp check tables at Bold Quest 19 in Finland this spring, the eyes of many envious allies were on them.

In 2017, the Army acquired the first Android-based version of a digitally-aided close air support (DACAS) system under a $4 million contract with Collins Aerospace. Now, the Canadians were among 70 JTACs from 16 nations putting their systems through a test and validation process as part of a multinational joint fires interoperability demonstration sponsored by the United States Joint Staff.

On the ramp in front of the tables were a French Rafale, Finnish F/A-18s, a U.S. Cessna 02 Skymaster, and a German Bombardier Learjet 35A replicating a Panavia Tornado. Behind the JTACs on a separate table, Joint Staff evaluators monitored a computer, verifying the message traffic between the DACAS systems and the aircraft.

“We were able to test and validate the software and, in short, it worked,” said Warrant Officer Jamie Murphy, modestly understating the moment.

“The Canadian Army stepped up…bang, bang, bang through the test—all green lights across the test tool,” said Charlie Heidal, responsible for mission systems advanced technologies and electronic warfare for Collins Aerospace and the company lead for Bold Quest. “Nobody else had that. The Canadian solution blew them all away.”

Where the Canadians took barely minutes to open their cell phone-like system, enter the data and connect, some nations struggled for up to 20 minutes to get their systems to communicate seamlessly and others crashed completely, said Heidal. “The boys were surrounded. It was kind of a rock star moment.”

The Collins Networked Joint Fires Cross Platform Dismounted Solution is an off-the-shelf Google Pixel tablet connected to a tactical hub supporting a Tactical Net Rover, a laser range finder, GPS, Harris 152A or 117G radio, and a conformal battery. The touch-driven targeting system uses an open-source military Android Tactical Assault Kit (ATAK), a software application that includes a geospatial mapping engine and other plug-ins to reduce and simplify the steps for JTACs to digitally coordinate air support from both legacy and current generation aircraft.

“It really is a leap ahead,” said Heidal, a former U.S. military JTAC. “We can literally do everything from a phone.”

The system allows a JTAC to coordinate air strikes in less than two minutes, rather than the 15 to 20 minutes it often took to “talk on the aircraft to a target and send the CAS brief, or 9-liner, by voice,” said Major Richard Parent, the project director. “It’s basically enabling rapid and accurate transmission of essential data between the pilot and the operator. All the other nations were looking over our shoulders in Finland at the great work delivered by the team. We are now delivering a capability to Canadian troops that is cutting edge.”

Collins has continued to fine-tune the Canadian DACAS system since it was first delivered, and the project team will finalize validations with the CF-188 Hornets in Mirabel this fall. “Not surprising, the digital connectivity to legacy aircraft has been more difficult than with modernized F-16s or F-22s. We cannot declare full operational capability delivery until we can drop a bomb from our own jets in support of our own JTACs,” said Parent.

The basic digital messages are just a first step in taking full advantage of the ATAK software’s potential, added Murphy, a JTAC with five international deployments, including three in Afghanistan. Link 16 tactical data link (TDL) integration, beyond-line-of-sight communication and more mission planning tools are all under consideration for future upgrades.

As significant as the delivery of DACAS is, however, it’s just one element of a much larger project to modernize joint fires across the Canadian Armed Forces (CAF). Digitizing communications between a dismounted JTAC and an aircraft is only the first piece in a complex puzzle that will eventually connect JTACs and forward observation officers (FOOs), either dismounted or operating from LAV 6 Observation Post Vehicles (OPV), with all surface, air and naval fire support delivery platforms.

“DACAS is a great use case and we are learning a lot, but it is just one piece of digitization,” said Parent. “We want to be able to efficiently request fires from the Navy for a Harpoon missile or a naval gunfire, or to request field or rocket artillery from any member within the coalition fight.”

The Joint Fires Modernization (JFM) project proposes to achieve that by vastly improving command and control (C2) capabilities through the procurement of targeting and battle management software, tactical equipment, and high-fidelity simulation training systems for operators, commanders and a myriad of planners, coordinators and other targeting staff.

The business case is not a hard sell. “We are going to lose with the analog ways we currently conduct tasks on the modern battlefield,” said Parent. “You simply can’t support land forces by voice safely or quickly in a coalition environment.”

Mistakes or misunderstandings within any fire order can cause delays or far worse. “For the mass projection of force by a coalition of five or 29 countries to be effective against an adversary of one that is interoperable at every echelon, fires have to be as accurate and responsive as possible. Digitization will revolutionize the way we do fires and the credibility and relevance that Canada will bring to the table,” he said.

Parent’s vision is a Canadian operator with a tablet through which he or she has access to the fires “toolbox” of effects from not only Canadian assets, but those of the entire coalition. Rather than calling for the weapons of a specific asset like an aircraft, the digital call for fire support would be triaged at the headquarters level and the most effective asset in the area would then be tasked, resulting in an expedited decision-action cycle and better use of resources. “If a ball-peen hammer is what is needed, you don’t need to call in a sledge hammer just because it’s the closest or the only one on your analog network,” he said. 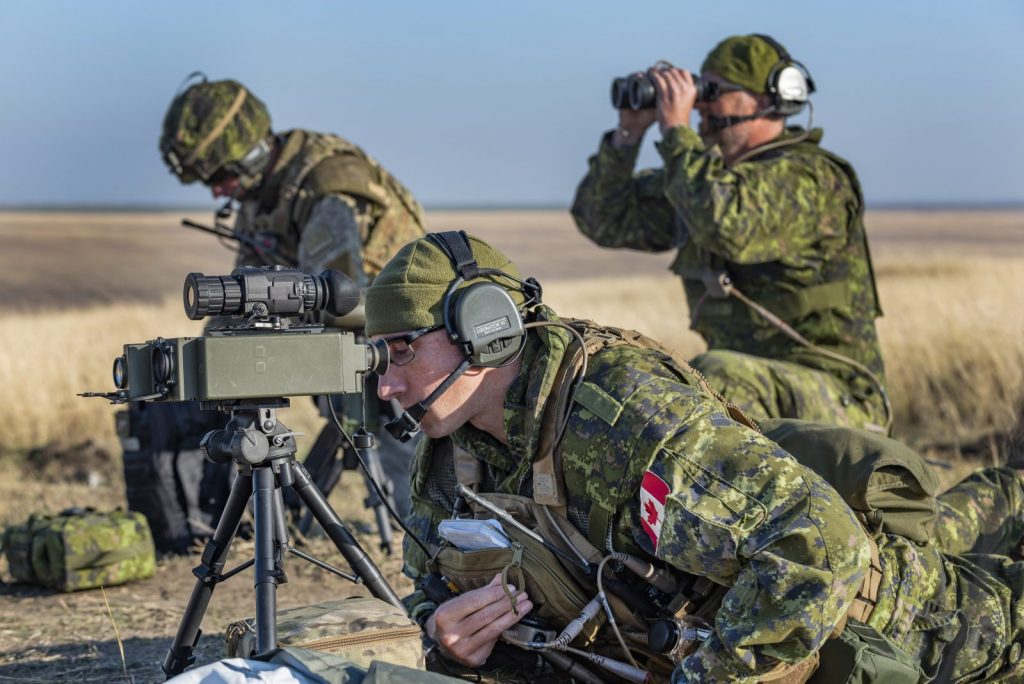 JTACs on the Live Control Phase of a course in Romania, working with the new Type 163 laser target designator and SWIR Pocket Scope and Multi Mode Tracker. Photo: Combat Camera

Getting from where the CAF is today to that grand vision will take time and perseverance. At present a digital link only exists between JTACs and line-of-sight pilots. Upgrading digital fires C2 and targeting software to connect operators with artillery and naval guns is no small feat. The raft of equipment and simulation training systems required in the JFM reads like a dozen or more separate projects. A small subset includes target acquisition tools, integrated digital vision systems, TDL gateways, mission planning tools, and anti-jamming capabilities.

Following on the success of DACAS, the project will now seek to establish a digital link with both Canadian and allied artillery, working with ABCANZ (American, British, Canadian, Australian, and New Zealand) armies in the development of a Variable Message Format (VMF) interface and by continuing on-going efforts to become a participant nation of NATO’s Artillery Systems Cooperation Activities (ASCA) Interoperability Program to establish the protocols and standards for joint digital fires transmissions.

JFM is currently slated to receive approval for implementation in 2024 and achieve initial operating capability no later than 2026, but the project team of Parent, Murphy and Rob Clarke, a retired gunner who served 22 years, isn’t waiting for Vote 5 funding to be approved. After shaving a year off of the high-paced options analysis phase of the project—the project received Defence Capability Board approval in July—they are pursuing a variety of minor capital investments, much like DACAS, to acquire as many of the pieces as possible that will ultimately inform JFM.

“We simply can’t wait to deliver capability improvements, so we are doing our best within the arcs. What can we buy for $5 million to deliver to the warfighter to bridge the gap to JFM?” said Parent, a former FOO and battery commander who also served in 1st Canadian Division HQ and gained an appreciation for the full impact of fire support at the tactical and operational levels. “Every piece leads to JFM. There are capabilities that we can deliver to the field and joint force tomorrow, and then JFM will take up the slack and either integrate or deliver what still remains to be done.”

DACAS was procured through a minor capital project to address an immediate obligation to be digitally interoperable for close air support with the United States and key allies by the end of 2018 as part of a U.S. Joint Staff-led Memorandum of Agreement. Other components of JFM don’t have the same international commitments driving them, but the age of certain equipment and training systems is reason enough to take what Parent called “de-risking” activities. “Like eating an elephant, you can only do it in bite-sized pieces,” he said.

The team has examined every piece of equipment and capability a JTAC or FOO carries to better understand how they might lessen both the physical and cognitive loads. Parent noted that almost 30 percent of an observer’s load is batteries required to power handheld thermal imagers, lasers, various optics and radios. Therefore, fewer, more efficient, lighter and better power management solutions are near the top of the list.

Later this year, they will deliver a new Leonardo Type 163 laser target designator. “It went from 30 pounds with an umbilical cord and five to six batteries to about four to five pounds,” said Murphy.

They are also looking for anti-jamming solutions for the soldier. In December 2017, Calgary-based NovAtel signed a $1.3 million contract to provide 52 units of its GPS Anti-Jamming Technology (GAJT) to be installed on the Army’s fleet of LAV OPVs. Parent wants a puck-size version of the antenna for the individual dismounted operator to fill the same requirement for accurate, secure and reliable access to GPS signals.

A greater concern is the obsolescence of much of the training equipment, which no longer meets the core accreditation requirements of JTACs and provides a dated and bare-minimum capability for FOOs. Ideally, they would like an immersive joint fires simulator, enabled by either a dome or VR goggles, networked with CF-18 pilots and each other across every base in Canada, which would transform individual and collective training and ultimately preserve live fire resources.

“We are trying to figure out how many we can buy under the funding envelope and within the capacity of the project management staff from ADM (Materiel),” said Parent. “The existing nation-wide network gives us the backbone to talk with CF-18 pilots, so with a Minor Capital investment, we are trying our best to put a new simulator in the hands of the troops well before 2026.”

Ultimately, the aim of the project is to “plan, coordinate, and execute fire support in the most accurate, efficient, and safe way,” said Parent, and digitization “has the potential to revolutionize our core business of providing fires in support of land operations, which we are masters at despite the limitations of analog methods.”